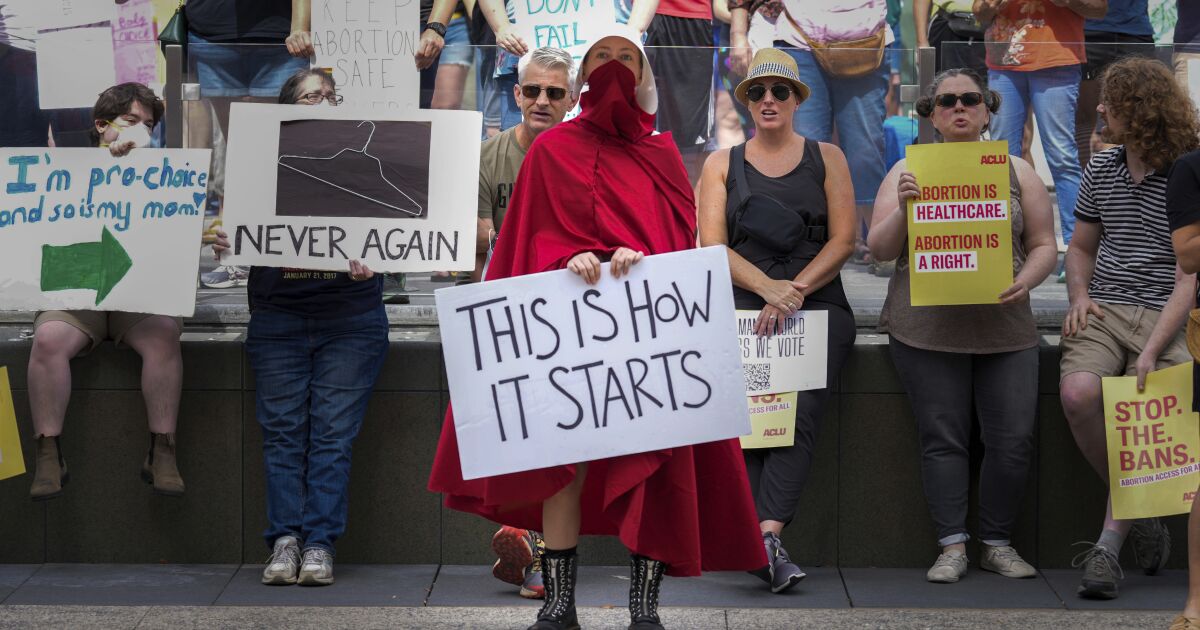 It’s fair to say I am a single-issue voter. If a candidate does not support the right to safe and legal abortion, they can kiss my vote goodbye.

Reproductive freedom is that important to me. Women must have autonomy over their own bodies and the right to choose their own fates and economic futures. My mantra is simple: If you don’t like abortion, don’t have one.

And yet, I don’t begrudge politicians who once opposed abortion but changed their minds.

Yes, Caruso was roundly knocked by Planned Parenthood in May for having donated nearly a million dollars to rabidly antiabortion policymakers over the years, but now that he wants to govern a deep blue city, I guess he’s seen the light. I’m still not a fan, but good for him.

Likewise, President Biden, a flagrantly devout Catholic, has said for years that he personally opposes abortion, but supports a woman’s right to choose. In the past, he has squirmed, trying to navigate a fine line by refusing to support federal funding for abortions.

Now that Roe vs. Wade has been overturned by our supremely out-of-touch Supreme Court, however, Biden is unapologetically an abortion rights supporter. He has pushed for the Women’s Health Protection Act, which would basically codify the right to abortion in federal law. It passed in the House — with no Republican votes, naturally — and failed in the Senate because it did not achieve the 60 votes needed to overcome the filibuster.

The Supreme Court’s cavalier overturning of a major, nearly 50-year-old precedent, the incredible torrent of unintended consequences the decision has unleashed and the existential threat to democracy posed by Republican embrace of Trump’s big election lie have probably done more to energize Democratic midterm voters than even Trump’s first two chaotic years in office did, when the House flipped from red to blue.

As a result, gung-ho antiabortion Republican incumbents are dialing down their rhetoric, if not embracing the wishful hope that abortion is not an important issue for their constituents.

“In swing states and even conservative corners of the country,” reported the New York Times, “several Republicans have shifted their talk on abortion bans, newly emphasizing support for exceptions. Some have noticeably stopped discussing details at all.”

Abortion rights advocates’ rage is real. And there is nothing like anger to get voters to the polls.

A special election in Kansas, where voters resoundingly rejected an attempt to outlaw abortion in the state, plus unexpectedly good Democratic showings in four special House elections this summer, have suddenly changed the calculation on abortion for Republican candidates.

This is surely why at least three embattled California Republican incumbents who signed an amicus brief asking the Supreme Court to overturn Roe and co-sponsored the Life at Conception Act, which would effectively ban abortion nationwide, have gone mum on the topic.

Those representatives are Mike Garcia of Santa Clarita, Michelle Steel of Seal Beach and David Valadao of Hanford, writes my colleague Jasper Goodman.

Thanks to widespread distaste for Trump, their three districts have swung between red and blue in the last few years. Garcia replaced Democratic Rep. Katie Hill, who broke a decades-long Republican hold on the district in 2018, then resigned after becoming embroiled in personal and ethical scandals. Likewise, Steel beat Harley Rouda, the first Democrat to represent the coastal district after a three-decade reign by Dana Rohrabacher. And Valadao was briefly dislodged by Democrat TJ Cox in 2018 before retaking the seat in 2020.

The California trio has every reason to avoid the topic of abortion. They are completely out of step with their state.

In California, a huge majority of voters — 81% according to a recent Berkeley Institute of Governmental Studies poll — consider abortion an important issue in this year’s congressional, state and local elections. Seventy-one percent say they would vote yes on Proposition 1, the constitutional amendment that would enshrine the right to abortion and access to contraceptives. And more than two-thirds of the state’s voters disapprove of the decision to overturn Roe.

Not long ago, it was a foregone conclusion that Republicans would take back the House in November and probably the Senate, too. It was simply presumed that the worst inflation in 40 years, fears about crime and immigration, plus Biden’s low, nearly Trumpian, approval ratings would destroy Democrats’ chances in Congress.

My guess is it won’t be the widespread approval of Biden’s palpable legislative successes — on climate change, healthcare and student debt — that will bring Democrats success in November. It will be rage over Republican efforts to turn women into second-class citizens again.