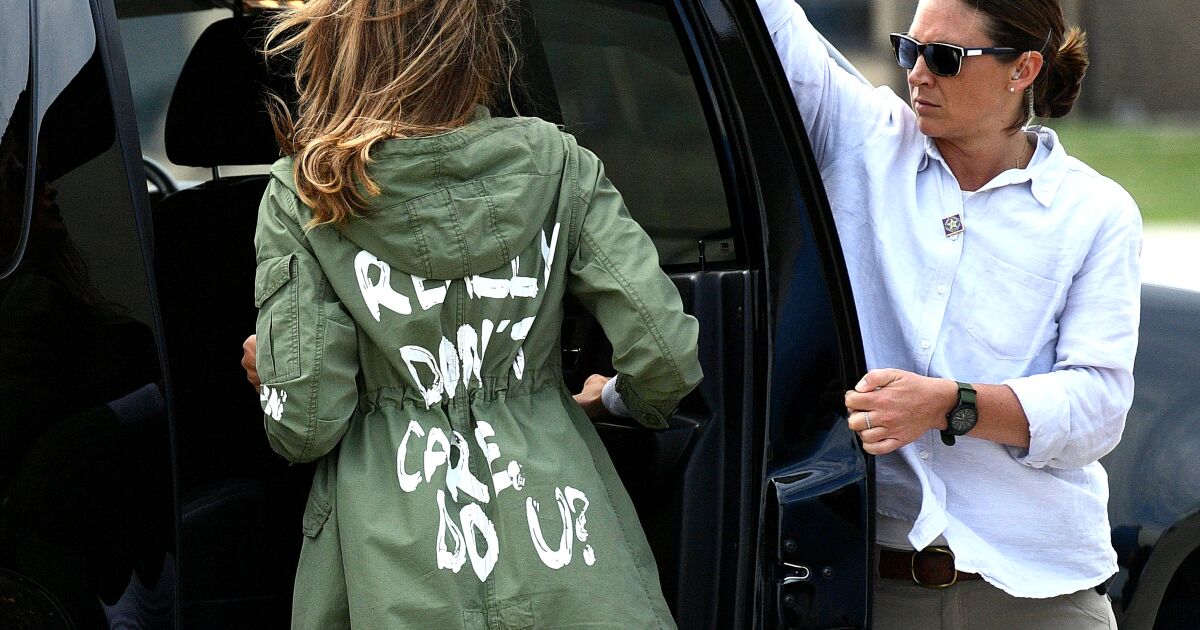 So did her husband, apparently.

“Just learned that agents went through the First Lady’s closets and rummaged through her clothing and personal items,” Trump posted on his social media site, Truth Social. “Surprisingly, left area in a relative mess. Wow!”

“What were they looking for,” quipped my reliably funny friend Roy Rivenburg, “Victoria’s National Security Secret?”

CNN also reported Melania’s annoyance, but noted that she was less upset about the legal ramifications for her husband than what she perceived as the invasion of her own privacy.

Melania never seemed comfortable in the role of first lady, and it was always painful to watch her strained interactions with her husband. And yet, even while she seemed sometimes an object of pity, she was not a particularly sympathetic figure. She left office as the least popular first lady since such surveys were conducted.

While it’s unsettling to have strangers paw through your closets and unmentionables, the unprecedented search of Melania’s bedroom and closets was legal. The warrant applied to all the rooms of Trump’s residence — his office, his storage rooms and “all other rooms or areas within the premises used or available to be used by [Trump] and his staff.”

This is simply the price you pay when you are married to a sticky-handed former president who is unable to grasp the difference between things that belong to him and things that do not. Turns out you have to put up with the occasional search warrant in service of the occasional suspected felony. And the occasional besmirching of your panties by government hands, even gloved ones.

“Who knows who touched her underwear during the raid?” an anonymous Melania “pal” told Radar. “She’s never going to feel comfortable wearing those ever again…. She hates people touching her and certainly doesn’t want to put on lingerie that FBI agents have had their hands all over.”

Fortunately, Melania has the wherewithal to toss them out and get some new ones. (Which is exactly what she did, according to the website.)

“This is her home,” said another anonymous friend. “It’s her bedroom. Even her husband isn’t allowed in her bedroom.”

But seriously, who besides some overly ardent members of the Trump base will get their knickers in a knot over agents touching the former first lady’s things?

To borrow a phrase made famous by Melania herself, I really don’t care, do you?

The far more interesting aspect of this developing news story is that a Trump-appointed federal judge in Florida on Monday agreed to Trump’s request to appoint an independent arbiter, or special master, to evaluate whether documents removed from Mar-a-Lago are subject to either attorney-client privilege or executive privilege.

The Justice Department argued strenuously that such a move was legally inappropriate and unnecessary, and was simply an attempt to delay and impinge the investigation into whether Trump illegally removed documents from the White House and obstructed justice when he refused to return them to the National Archives.

With a few exceptions, legal experts have agreed with the Justice Department, opining that U.S. District Court Judge Aileen M. Cannon’s decision to accommodate the former president was wrong.

The feds, after all, say they have already analyzed the documents, so it’s not clear what effect the judge’s ruling will have on the investigation, other than to slow it down.

What really sticks out in the judge’s 24-page order, though, is her deference to Trump’s “former position as President of the United States” and her concern that the “stigma” associated with the feds’ seizure of documents “is in a league of its own.”

“A future indictment, based to any degree on property that ought to be returned, would result in reputational harm of a decidedly different order of magnitude,” she wrote in allowing the special master appointment.

Again, you can’t make this stuff up.

How do you harm the reputation of a man who lost reelection, refused to concede, concocted a lie about winning, tried to get elections officials to commit fraud and egged on violent insurrectionists on the day his successor was to be officially named the winner by Congress?

How do you harm the reputation of a man who defied a subpoena from the National Archives for the return of documents he took when he left office?

How do you harm the reputation of a man who is under criminal and/or civil investigation for alleged election fraud in Georgia, tax fraud in New York and incitement to riot in Washington, D.C.?

How do you harm the reputation of the man who has promised to pardon and apologize to the rioters whose actions brought death and mayhem to the Capitol on Jan. 6?

How do you harm the reputation of a man who was impeached twice by Congress, first for trying to strong-arm Ukraine to do his political bidding and second for appearing to incite the Jan. 6 riot and then failing to act to quell it?

Melania Trump may have felt besmirched by the FBI rifling through her drawers. But the blame is squarely on her husband. Acting as if he is above the law, he brought the FBI to Mar-a-Lago in the first place.