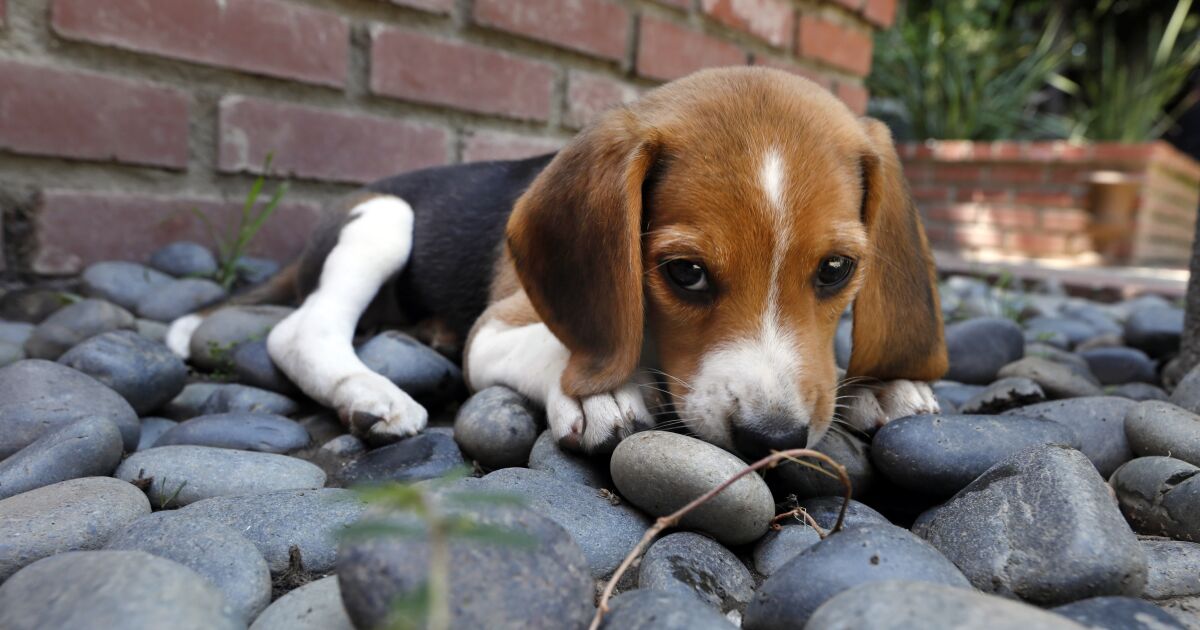 The liberation of 4,000 beagles from deplorable conditions last month at Envigo’s breeding and research facility in Virginia raised uncomfortable questions about the use of animals in scientific research. Beagles, it turns out, lend themselves to research because they are sweet, docile and small. Ugh.

After writing about Nancy, an Envigo beagle now in foster care in Sherman Oaks, I received emails from two groups with an intense interest in the issue.

The first came from PETA, the animal rights group that has evolved over the decades from Ingrid Newkirk’s one-woman anti-cruelty crusade to a sophisticated operation with scientists and attorneys dedicated to ending animal cruelty and stopping the use of animals — all animals — in scientific research.

“Even zebrafish?” I asked Kathy Guillermo, PETA’s senior vice president of laboratory investigations, in a phone conversation last week. (The fish is useful to scientists studying embryology because it is transparent, and they are cheaper than mice.) “Whether one wants to realize it or not,” she replied, “a fish is a sentient being.”

PETA’s undercover investigations into conditions at the Envigo facility helped bring about its closure, a fact overlooked in much of the news coverage, including mine.

The second email was from a London-based group that works to educate the public about the benefits of using animals in scientific research.

“I don’t normally contact US journalists since we’re UK-based,” wrote Chris Magee, head of policy and media for Understanding Animal Research, “but the use of dogs is something that happens the world over for the very simple reason that they are excellent at predicting human safety.”

To delve into the controversial world of animals in scientific research is to — pardon the expression — plunge down a rabbit hole that will test everything you believe about yourself as an empathetic, animal-loving human being who abjures suffering. There is no question that numerous advances in medicine have been made possible by the sacrifice and suffering of animals. By far and away, the greatest number of animals used in labs are rats and mice. But thousands of cats, dogs, monkeys, rabbits, hamsters, guinea pigs and other creatures are subject to experimentation every year. Some experiments test efficacy, others toxicity. And there is huge debate over whether the high failure rate in all experiments means that animals should not be used.

One move in the right direction: A bill introduced in Congress last year would end the federal requirement that drug and cosmetic companies test their products on animals to establish safety and effectiveness because alternatives exist.

How can we say we love animals and support attaching electrodes to the brains of monkeys in research designed to determine whether sex or power is more persuasive in brand advertising? I certainly can’t.

And neither can many scientists, who have worked in animal labs, then had a change of heart about the suffering they’ve caused.

In a short film, “Test Subjects” by documentarian Alex Lockwood, one researcher said her thesis advisor refused to accompany her at her graduation ceremony because she dedicated her dissertation “To all the animals I killed: I’m sorry. I was wrong.”

“If you stand with science, you wear the mantle of the scientist,” the primatologist Lisa Jones-Engel once told a reporter for the Guardian. “If you stand with the animal rights movement, you wear the mantle of the advocate, the moral, ethical person. I have one foot on either side because I understand both sides. And it is a horrible place to be.”

Jones-Engel left the world of academic research after 35 years, and is now a senior science advisor on primate experimentation with PETA’s Laboratory Investigations Department.

After vigorous campaigning by PETA and other animal activists, the European Union banned the sale of cosmetics tested on animals. Use of the infamous Draize eye irritation test, where rabbits’ eyes are propped open to test the toxicity of cosmetics and household cleaning products, has thankfully been on the decline.

But what about animal experiments aimed at reducing widespread human suffering — pain from arthritis, injuries, cancer or headaches? For most of us, I think, that is a far more complicated moral dilemma.

Researchers justify their experiments “by the magnitude of the problem the experiments are designed to solve,” said the National Academies of Sciences, Engineering, and Medicine in a 1991 paper. “Without research on a relatively small number of laboratory animals, there is little hope that continued progress can be made in alleviating this widespread human suffering.”

Magee told me the U.K. has a rigorous, centralized system where researchers have to justify, down to minutiae, the use of animals in labs: “You can’t use an animal if there’s an alternative,” he said.

That is also supposed to be the case in the United States, but oversight is far less rigorous.

PETAhas filed a novel lawsuit against the National Institutes of Health, alleging that the $10 million the agency spends each year to fund sepsis research in mice is a waste of taxpayer money. Sepsis, a catastrophic reaction to infection, kills about 270,000 Americans each year.

Using mice for sepsis studies is misguided, PETA claims, because sepsis in mice does not accurately replicate the disease in humans. Also, the lawsuit alleges, “No new pharmacological treatments have been developed for sepsis despite decades of intensive study.”

The solution to the quandary of animal experimentation may come from scientific and technological breakthroughs such as sophisticated computer modeling, tissue engineering and other human biology-based methods. At Harvard, the Wyss Institute has developed “organs on chips” described as “microfluidic devices lined with living human cells for drug development, disease modeling and personalized medicine.”

“To be fair,” said Guillermo, “NIH is funding some of that, too.”

I look forward to the day we stop using sentient beings in laboratory experiments. We must find ways of improving the health of human beings without harming or killing other living creatures.