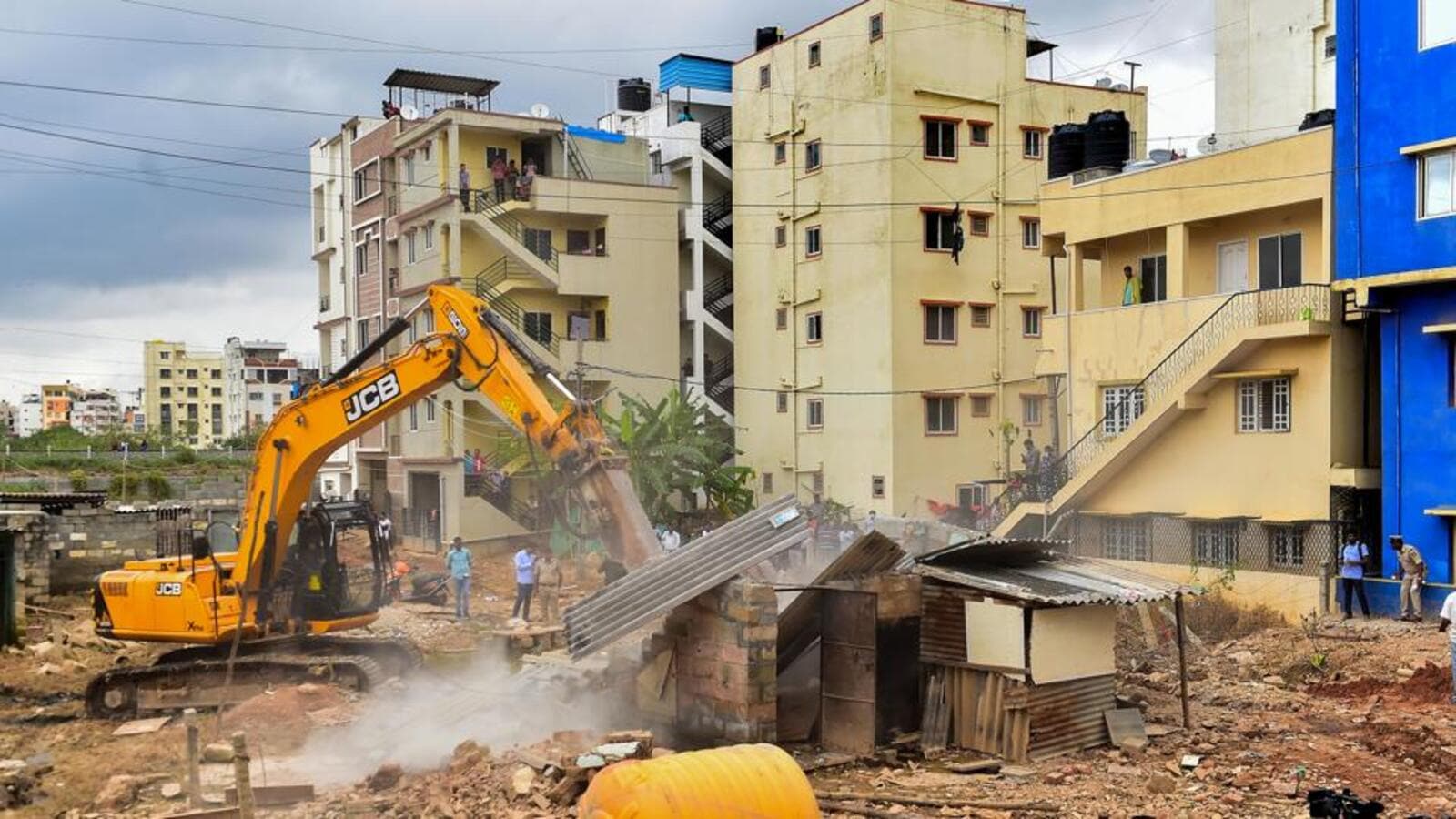 Civic body Bruhat Bengaluru Mahanagara Palike (BBMP) continued its anti-encroachment drive for the second day on Tuesday in several areas of Mahadevapura zone, even as allegations of “bias against the poor” during the demolition came to the fore. The state government, however, said instructions to “unsparingly demolish (illegal) structures” have been given.

Speaking during the monsoon session of the state assembly, senior Janata Dal (Secular) legislator AT Ramaswamy said, “They (government) have demolished the homes of poor people but left out the rich,” to which the assembly speaker interjected, stating that there were many stay orders.

The BBMP has been razing illegal structures built on the stormwater drains (SWDs) in several areas of the city which allegedly caused the flooding.

“What the government is doing is not fair. They (BBMP) approved our (building) plans.The BBMP had said that the SWD was diverted. We have been paying taxes, now the government says they are going to demolish the building,” said a Mahadevapura resident, on anonymity.

Revenue minister R Ashoka, however, said that his department is giving a list of encroachments to the BBMP. “I have given instructions to the deputy commissioner, assistant commissioner and tehsildars to stand with the BBMP and provide them with the documents, without looking at people and unsparingly demolish (illegal) structures,” Ashoka said.

A few residential buildings in the Munnekollal area near Mahadevapura, which are on the list of encroached wetlands, were also demolished, said an official. The drive will continue for the next few days, said the official.

A BBMP official, who is part of the drive, said the government has given a go-ahead and there is no question of sparing anyone, however powerful they may be.

Meanwhile, BBMP stated that constructions in IT parks such as Bagamane Tech Park, Eco Space and Gopalan have been identified as stormwater drain (SWD) encroachments and the civic body has issued notices to these IT parks as well.

Apart from the IT parks, a few buildings in New Horizon College, Adarsha Retreat, and Columbia Asia hospital are also on the SWD encroachments list, they claimed.

Upscale and gated apartments such as Divyasree and Epsilon have been identified as encroachments on SWDs in Yamalur. In addition, a notice has also been served to 15 owners of villas on the Rainbow Drive Layout, which was inundated, after heavy rainfall in the city. The National Disaster Response Force had to evacuate people in boats and tractors, the officers added.

The action against these encroachments is being carried out as it was identified as one of the main factors why this part of the city was inundated after heavy rains on September 5 and the following days.

“In Mahadevapura assembly constituency’s Challagatta, Nalapad Academy had encroached Survey No.70, and now its clearing work has been initiated by BBMP and revenue department officials,” Limbavali said, adding pictures of the demolitions. “In my constituency limits, if anyone has encroached rajakaluve (stormwater drain), I request them to immediately vacate it,” Limbavali added.

“By next monsoon, we have to clear all pending demolitions… all apartments will be led off, as you saw in Noida. Action will be taken against officials and builders. Discussion regarding Bengaluru floods also happened in the assembly” the revenue minister said.

On September 2, chief minister Bommai had ordered the clearing of encroachments on rajakaluves in the city. Following his orders, BBMP had demolished compound walls, a security guard’s cabin, makeshift homes, etc in Bengaluru.

(With inputs from PTI)

Bengaluru crime: 30-year-old murdered by a gang of 6 at midnight, 3 were women | Bengaluru

Amid anger over death of boy, 5, alleged negligence in Karnataka, 2 suspended | Bengaluru