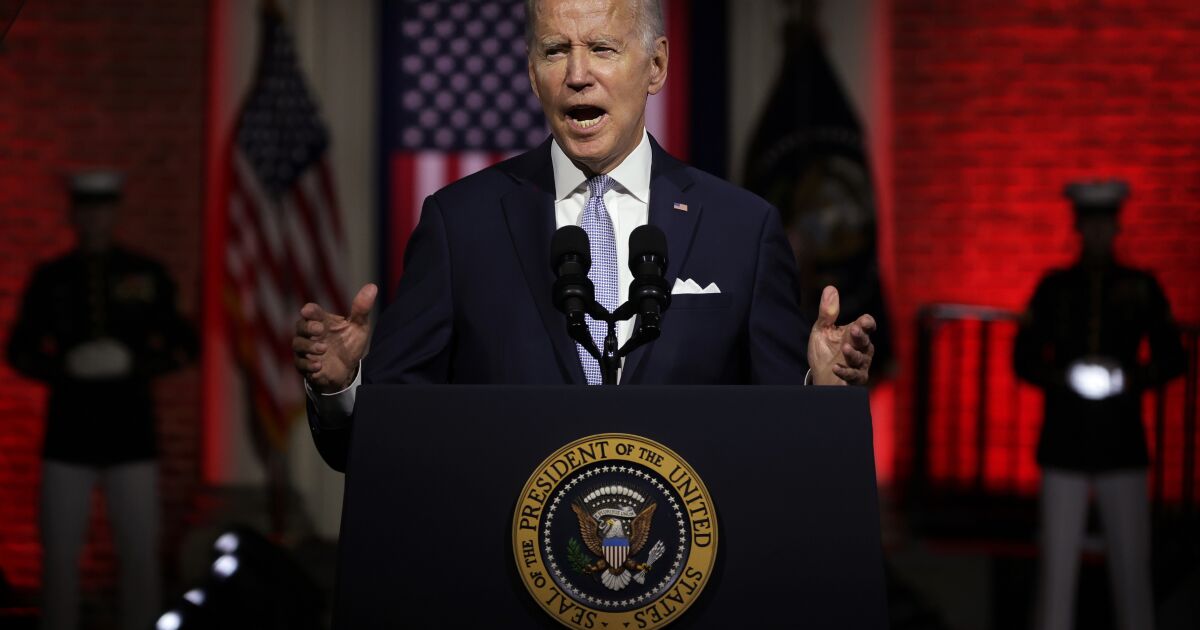 To the editor: President Biden’s address to the nation Thursday night was a clarion call to save democracy. How can democracy survive in this country if its bedrock foundation, free and fair elections, continues to be undermined and attacked by millions of people claiming to be patriots?

Looking to the November midterms, I have two overarching questions: First, will the Republicans who lose claim their defeats are the result of rigged elections? And second, will they clog the courts with the same unfounded examples of fraud that judges, appointed by both Republican and Democratic presidents, rejected in 2020?

Election deniers inspired by the former president are running for high-profile, statewide offices across the country. My guess is that many more are seeking city council, school board or water board seats as well. To each of them I ask: Which is more important, your winning based on discredited, unproven “truths” about rigged results, or democracy based on free, fair and legitimate elections enduring?

I support the president’s call to action.

To the editor: Here we go again. The guy who promised to bring us together is tearing us apart.

Biden’s incendiary language directed at so many Republicans isn’t a good strategy for uniting our country. His insults and vicious smears are bringing chaos to our fragile democracy.

We have a president who is smearing millions of Republicans as anti-democracy zealots. This demonization will spark distrust and great division in our society.

I’m afraid we may be descending into a period of distrust and alienation that could eventually bring us to the brink of civil war.

To the editor: Biden’s statement that “blind loyalty to a single leader and a willingness to engage in political violence is fatal to democracy” was spot on.

I wish he had mentioned the recent Conservative Political Action Conference gathering, where Hungarian autocrat Viktor Orbán was invited to speak and received a standing ovation. Clearly, that’s the kind of leader the Trumpists want, illiberal and nationalist.

Thankfully most Americans do not want this, and Biden gave voice to their very serious concerns.

To the editor: If The Times, in supposedly deep-blue California, didn’t put its report on the president’s speech on the front page, we are in worse trouble than ever. It’s already pretty frightening that major television networks didn’t broadcast the prime-time speech, this president’s most consequential thus far.

It’s disheartening that Biden’s great legislative successes have not been loudly and frequently trumpeted, whereas any garbled comment by former President Trump gets enormous publicity. Perhaps the media don’t or can’t see the crisis of democracy in which this and other countries find themselves.

Tithi, Shubh Muhurat, Rahu Kaal and Other Details for Monday

Tithi, Shubh Muhurat, Rahu Kaal and Other Details for Monday