Broadway finds its Dark Side with James Earl Jones Theater 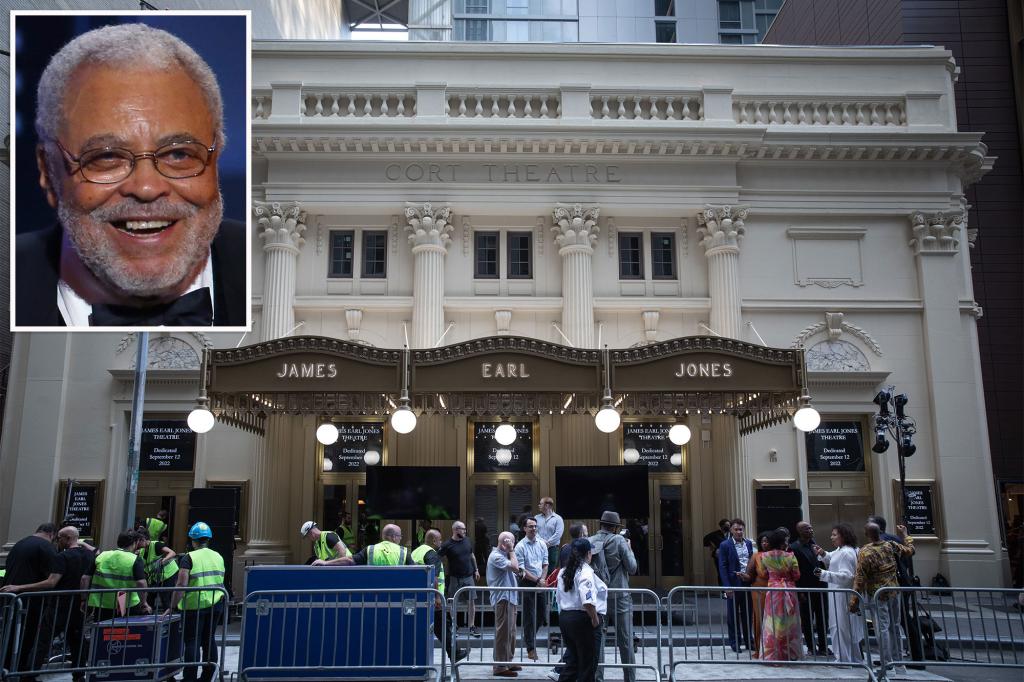 I love Jimmy. We’ve done dinners, partied at home with his late wife. Backstage when son Flynn dressed him. He who voiced “This is CNN,” I saw in a dressing room in his drawers.

1987, his baby, frightened by daddy’s two-sided comedy/tragedy/smiling/nonsmiling award, turned the scowling side to the wall.

After a Grammy, two Tonys and through a cookie in my apartment, Darth Vader explained his “Driving Miss Daisy” on Broadway.

“No makeup. If I’m shiny they powder me. We do this with no car. Just the wheel. The show’s 90 minutes. No intermission.” And if you need to pee? Him: “Crawl over someone.”

Small dressing room. Wall mirror. Makeup table. Towels, powder, busy gnomes. Adjoining cubicle with sofa so he could rest. Flattened against the wall I said: “Afraid to get in your way.” Him: “Don’t worry. If you are, somebody will get you out of there.”

Visitors signed his guest book. And he said: “I’m a late-night person. Watch TV. When working I stay in my NYC apartment. Matinee days a massage, don’t go out, we bring food in. Forever I’ve lived in the same country compound. My office is a building nearby. I do the treadmill in my gym. And a lady does the cooking.”

That famous voice no longer speaks on the phone.

Thanks to Broadway for the new James Earl Jones Theater.

Producer Judd Apatow: “It’s time for this. We’ve all been watching comedies alone in our rooms. Fun to go to a real theater and enjoy it with a bunch of people.”

Next season: Showtime’s series “Fellow Travelers” about Roy Cohn who left us in ’86. Actor Will Brill, born in ’86, educated in Pennsylvania, begun in showbiz at age 5, plays Roy Cohn.

Just filmed was the 1953 DC scene. The McCarthy hearings. The communist scare. Roy on Capitol Hill navigating between politicians and gay men.

Next, next year: “Captain America: New World Order.” Anthony Mackie, first black man to wear the Captain America logo, a Marvel first, he said: “I’m usually a film’s secondary character. Humbling to be the lead for the first time.”

Please. Can Fox have just one female anchor who is not blond? Can NY1 teach new young anchors to read prompters without their eyeballs looking straight up? Can TV hire one newsgal without long straggly straight thin hair hanging down both sides of her face?

Harvard claims it graduates most of our nation’s lawyers and politicians. So, maybe good enough reason to close the place down?

TikTok Sued By US State Of Indiana Over Child Safety, Security Fears