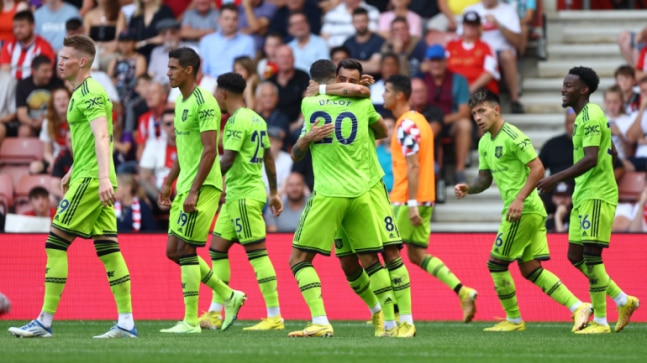 Manchester United ended a run of bad form away from home with a 1-0 victory at Southampton in the Premier League on Saturday thanks to a second-half strike from Bruno Fernandes.

Bruno Fernandes scored a wonderful volley to help Manchester United end a dismal sequence of seven straight Premier League away defeats with a 1-0 win at Southampton. Fernandes’ second-half strike proved to be the difference as United secured its first clean sheet in the Premier League 2022-23 season.

United’s second win on the bounce lifted them to sixth place in the table after four games. United began strongly after the break and their pressure told in the 55th minute when Fernandes, leading the side in the absence of Harry Maguire, scored with a low volley from the edge of the box after being expertly fed by Diogo Dalot.

“It was a great ball (for the goal), even great play from behind. Everything was perfect. Someone runs, someone gets the space behind,” Fernandes told BT Sport.

“We did two or three seasons ago not losing from home but we want to win every game. That’s what it’s about to play for Manchester United.”

Southampton had a penalty appeal turned down minutes later when a high ball appeared to have struck Scott McTominay on the arm before David de Gea made a superb reflex save to keep out a header from Joe Aribo.

United boss Erik ten Hag turned to Cristiano Ronaldo and Casemiro, who arrived from Real Madrid earlier in the week, to see out the game, but the hosts did not go down without a fight.

They dominated the ball in the closing stages and substitute Sekou Mara almost found an equaliser deep into stoppage time but his overhead effort was cleared off the line as United held on for the win.

Southampton manager Ralph Hasenhuettl was proud of his players despite the narrow defeat, adding that his side deserved more from the game.

“We had very good moments and a lot of good chances in the box. They had two shots on target in the second half,” said the Austrian.

“I felt we were always dangerous. Every set piece was dangerous and we were really stretching them, but the ball didn’t want to go in. I’m not scared with this team because they really fight for our targets and that is good to see.”

Inside story of Ashok Gehlot's rebellion against Congress First Family

The dark side of moonlighting

Aamir Khan, On A Break, “Will Come Back To Acting After A Year”