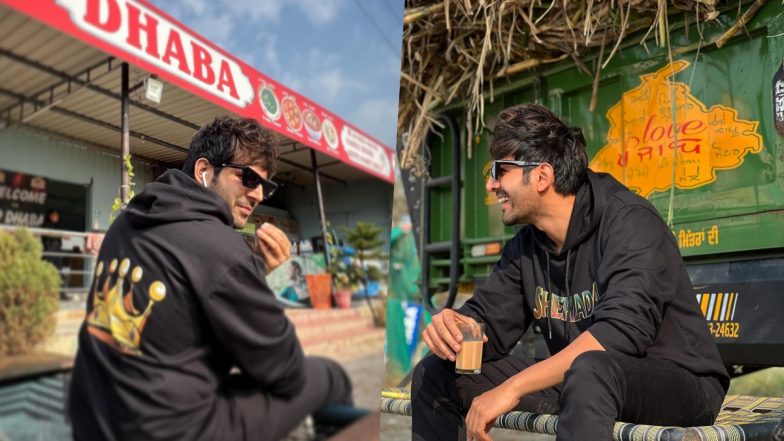 Chandigarh, January 14: No visit to Punjab is complete without hitting a roadside dhaba and gorging on “desi food”. Actor Kartik Aaryan did not miss this chance during his recent work trip to Punjab. On Saturday, Kartik took to Instagram and shared a few pictures. In the pictures, he can be seen holding a hot glass of chai.

In another image, he gave a close-up of paranthas loaded with butter. He also dropped a picture of himself eating sugarcane. “When in Punjab….#Shehzada Tour,” he captioned the post. ‘Kadak Chai and Garam Samosa,’ Sobhita Dhulipala Steps Out in Rajasthan To Explore the Street Food.

Kartik visited Punjab along with actress Kriti Sanon for the trailer launch of their film Shehzada. The duo also celebrated Lohri there. The Bhool Bhulaiyaa 2 star posted a video of his first Lohri celebrations in the land of five rivers. In the clip, Kartik and Kriti can be seen dancing to the tunes of dhol.

Helmed by Rohit Dhawan, the film also stars Manisha Koirala, Paresh Rawal, Ronit Roy, and Sachin Khedekar in the lead roles and is all set to hit the theatres on February 10, 2023. ‘Shehzada’ also marks the debut of Kartik as a producer.

Shehzada is an official Hindi remake of the Telugu film Ala Vaikunthapurramloo which starred actor Allu Arjun in the lead role. Kartik will also be seen in director Kabir Khan’s upcoming untitled film and Hansal Mehta’s next Captain India.