Calmes: Good for Biden. Call out the violent threat to democracy by name —Trump and the MAGA Republicans 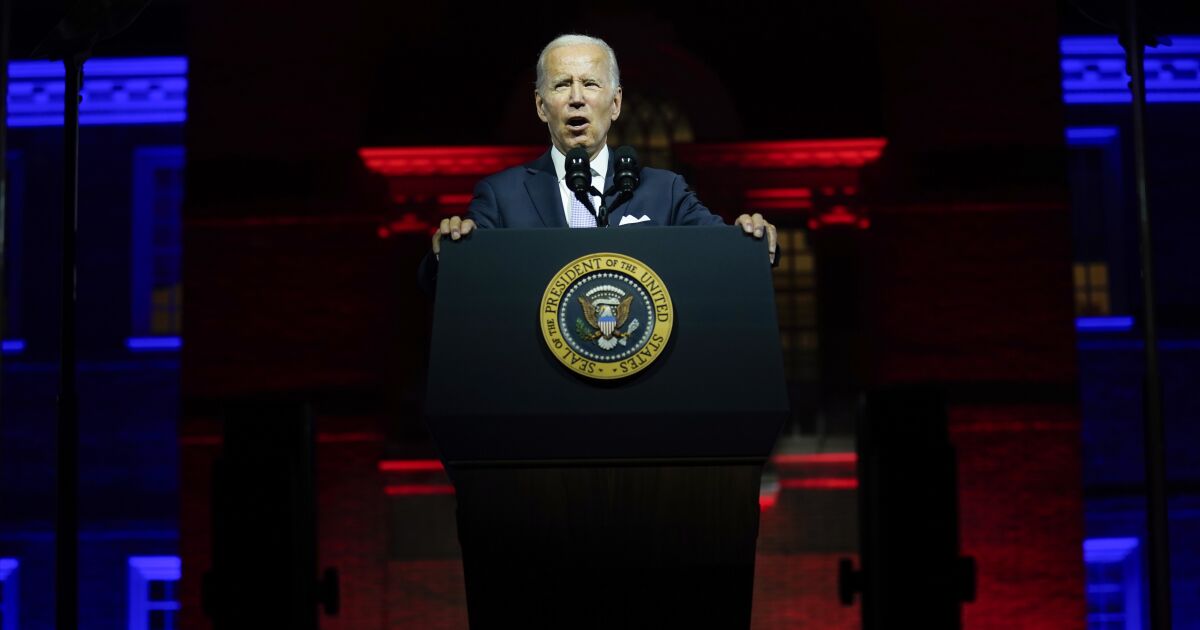 President Biden declared in his prime-time speech Thursday at Philadelphia’s Independence Hall that the nation is at “an inflection point.” He could just as well have been talking about his presidency.

Nearing the midpoint of his term, Biden signaled that he would no longer be the president he’s been for 19 months: One who has presided over the government as if these were normal times. As if he weren’t the first president whose predecessor refused to concede defeat. As if four out of 10 Americans — persuaded by that seditious rival — don’t believe he is an illegitimate president. As if the opposing party is a healthy one, a pro-democracy party.

Was it a political speech, even a partisan one, as Republicans and many pundits complained? Of course it was — the midterm elections for control of Congress and many statehouses are two months away. But just because his words were political doesn’t make them bad. If anything, they were way overdue.

Jackie Calmes brings a critical eye to the national political scene. She has decades of experience covering the White House and Congress.

Biden, who declared in his inaugural address that “democracy has prevailed,” until now could be more legitimately criticized for seeming oblivious to the evidence that, in fact, democracy remains endangered long after the failed insurrection of Jan. 6, 2021. He seemed to be failing to recognize that these aren’t normal times, failing to seize the moment.

Finally, at the birthplace of the Constitution, he did so.

“As I stand here tonight,” he said, “equality and democracy are under assault. We do ourselves no favor to pretend otherwise.”

Now, instead of the utterly normal president he pledged to be after the tumultuous Trump years, Biden assumed the mantle of crusader for democracy. “And,” he said, “I’m asking every American to join me.”

Events, and Donald Trump, have conspired to wrench an utterly conventional president from his comfort zone. Right-wing political violence has been both threatened and real; local election administrators, school board members, FBI agents and IRS employees get death threats. Sen. Lindsey Graham suggested without condemnation that there’d be “riots in the streets” if Trump is indicted for stealing top-secret documents.

In state after state, Republicans have nominated election-deniers for top offices, changed laws to restrict voting and punished party members who defy Trump. They call the insurrectionists “patriots.” Just hours before Biden spoke, Trump said that as president he’d pardon them and issue a government apology.

“Ladies and gentlemen,” Biden retorted, “we can’t be pro-insurrectionist and pro-American. They’re incompatible. We can’t allow violence to be normalized in this country.”

House Republican Leader Kevin McCarthy had bleated earlier Thursday that Biden is “slandering tens of millions of Americans” as fascists, but more credible critics of the president similarly said after his speech that Biden is wrong to take on the MAGA Republicans as well as Trump. Yet if Trump were alone in his push for a white Christian autocracy, democracy wouldn’t be in danger. It’s the forces he’s radicalized that make him, and Trumpism, a threat.

Again, it was past time that he engaged those forces.

Biden was careful to differentiate between MAGA Republicans and mainstream Republicans; the latter he can work with, and does, he said. Yet, he accurately added, “There’s no question that the Republican Party today is dominated, driven and intimidated by Donald Trump and the MAGA Republicans.”

Biden’s popularity, while improved after recent achievements, remains low. Of course he would rather the midterm elections be a choice between his side and Trumpism than a referendum on the president, as they usually are. But so should we all prefer that and hope that many Republicans pay a price. Only a big defeat for the party will force it to undertake the reckoning necessary for its return to health.