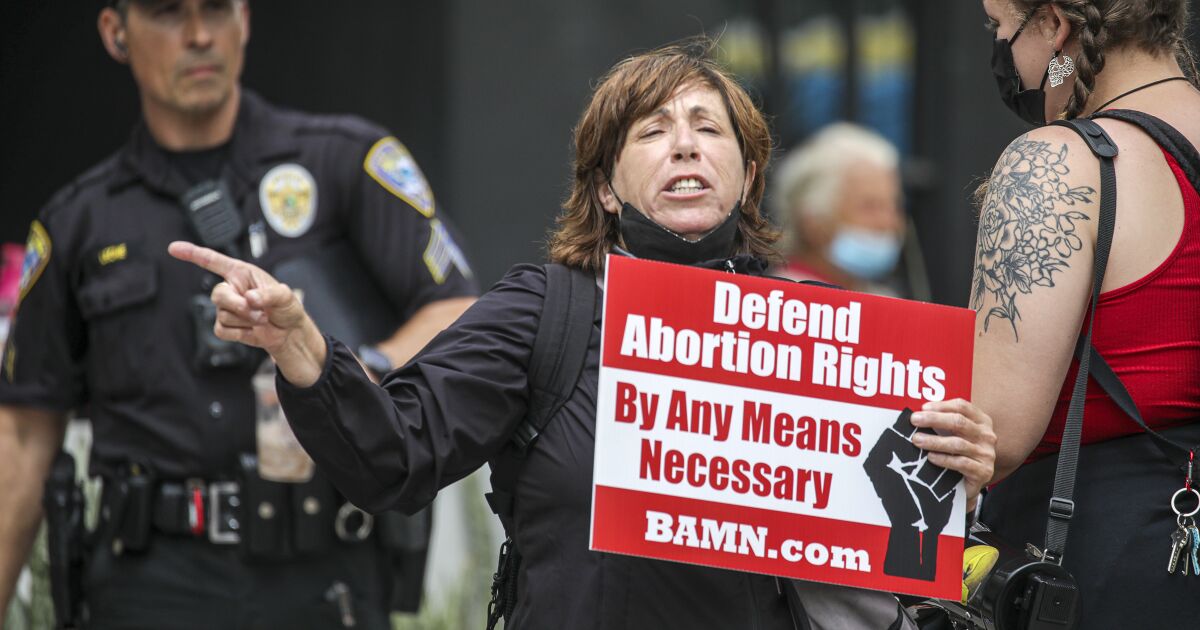 Digital privacy is a huge concern in the post-Roe world, one where women’s bodies, or at least their uteruses, are increasingly considered community property in less enlightened states than California.

Women are being warned to delete their period-tracking apps, turn off our location tracking as if we are Russian spies crawling into Mar-a-Lago closets, and, gasp, pick up the phone rather than text.

California legislators are working on a clever way to help women, though — across the country, not just in our state.

The legal jujitsu in question is Assembly Bill 1242, by a Bay Area former corporate lawyer, Assemblymember Rebecca Bauer-Kahan (D-Orinda). It’s expected to pass out of the Legislature this week with little notice, then head to Gov. Gavin Newsom’s desk.

The bill mostly deals with protecting women who travel here for abortions and those who provide services from having their California activities used in prosecutions in other states.

But the magic of the measure is that it would give California-based communications and technology companies a way to bring many subpoenas for information about criminal abortion cases into California courts — where they would almost certainly be denied. It doesn’t matter where the alleged crime (which obviously should not be a crime) took place — if the abortion in question is legal by California standards, this law would apply.

California Atty. Gen. Rob Bonta, whose office wrote the potential law, calls it an “elegant” defense against the “seemingly endless cruelty” we are seeing with restrictive and punitive abortion bans.

But it requires tech companies to do their part, and the track record for that is a solid maybe-maybe not. I’ll get to that.

First, a little credit for a simple plan with big implications.

As things stand now, when a law enforcement agency wants to dig into your private texts or your Twitter direct messages, for example, it asks a local court for a special kind of subpoena specific to communications.

Once granted, it can often be served in various ways, even to an email address, regardless of where that company is headquartered or the digital information actually stored.

But a company could insist it be served at a headquarters or to the location responsible for that data, which many of the tech giants could reasonably argue is in California.

The law would also require that those warrants, in order to be upheld here, would need a statement attached guaranteeing that the information was not being sought in an abortion-related case. If it’s some other kind of investigation, fine, California will likely cooperate.

But since the bill also makes it illegal for California companies and public entities such as law enforcement and courts to assist in out-of-state abortion investigations, that would essentially kill the warrant here if that’s what the case is about.

It’s a shield we are handing to tech companies, and all they have to do to use it is agree that they are in fact California-based.

Take for example the recent case of a Nebraska mom and daughter who are currently facing felony charges over an abortion considered illegal in that state. Part of the evidence against them is a series of Facebook messages, obtained through a warrant.

After being hammered by media coverage, Meta, the parent company of Facebook, put out a statement arguing that it did not know the warrant pertained to an abortion investigation, and that it happened right before Roe vs. Wade was gutted anyway.

But it didn’t say what the company would have done if it had been clear that the case was about an abortion. And it turned over the information, messages that were clearly about abortion if the company had bothered to look, in a head-spinning two days.

The new legislation, if Newsom signs it, would force companies like Meta to take a public position on reproductive privacy. If California-based tech companies want to cooperate with locking women up for exercising bodily autonomy, they can just move forward with fulfilling the warrant in whatever backward jurisdiction issued it and deny their California roots.

But if they actually have any kind of spine or conscience, they could cite this law and have the matter heard here, where misogyny has not been codified into reproductive law.

If they don’t, the state attorney general can bring a civil action against the tech company — so California-based companies can either protect our privacy when it comes to abortions or defend their decision in court.

That provision is what gives the measure teeth, Bonta said, and if there’s any doubt where California will stand on forcing our companies to comply, he warns, “We are going to enforce.”

“This is important to the entire state of California, to our identity, to our values, to what we stand for,” he said.

Bauer-Kahan was just as certain. “California leaders were prepared for this moment,” she told me. She’s been working on reproductive rights since she was elected in 2018, and plans to do more around reproductive privacy next year.

We, as consumers, mothers, daughters, fathers and friends, have a right to know what these companies are going to do when push comes to shove with our most intimate and sensitive information. Not only does this law provide a potentially enormous protection for women, it forces California companies to be transparent with the decisions they are making about our lives.

The Nebraska case isn’t the first in which digital communications about abortion were used to prosecute, and it certainly won’t be the last.

In 2017, a Mississippi woman faced murder charges in the death of her fetus, with her online search history used as evidence. In 2015, an Indiana woman was sentenced to 20 years for infanticide based on evidence that included text messages about abortion pills.

Those kinds of cases are on the rise across the country, making it increasingly likely that the law will be sadly relevant. This week, the Federal Trade Commission sued a company that sells location data, Kochava, arguing its brokering of such data puts women at risk.

We are tracked every minute of every day, and it is becoming increasingly imperative that we understand how that data can be used against us.

But the elephant in the law is whether or not tech giants will avail themselves of the protections and embrace being California companies. Some companies, including Apple, have been supportive of the idea and involved in the process of crafting it, according to Bauer-Kahan. Others, not so much.

But thank goodness for California, which isn’t just paying lip service to being a reproductive sanctuary, and isn’t just worried about what’s happening within our borders.

I never thought I’d live in an America where my daughters didn’t just have to fight for their basic human rights, but had to be fearful of being hounded and hunted for their choices. I didn’t think we’d see an America that seeks to force women out of the public sphere through forced childbearing, the first step in dismantling a democracy based on equality.

But here we are.

Laws like this are real weapons in a real war for women’s rights and for our democracy, one that has left too many of us feeling, if not defeated, beat up. We need courage and solidarity — the only way rights have ever been won in this country.

And we need hope.

Having the might — and brains — of California on our side gives me optimism, albeit an angry kind.

Maybe my granddaughters will know what equality feels like.

Maybe someday California can go back to just being a state in the union, instead of a state of refuge.

Watch L.A. Times Today at 7 p.m. on Spectrum News 1 on Channel 1 or live stream on the Spectrum News App. Palos Verdes Peninsula and Orange County viewers can watch on Cox Systems on channel 99.

Meghan Markle pal says ‘I’m sorry’ for introducing her to Harry: ‘All my fault’

Meghan Markle pal says ‘I’m sorry’ for introducing her to Harry: ‘All my fault’