Comfort dogs are greeting Uvalde students for their return to school. Here’s how canine visitors can help after tragedy 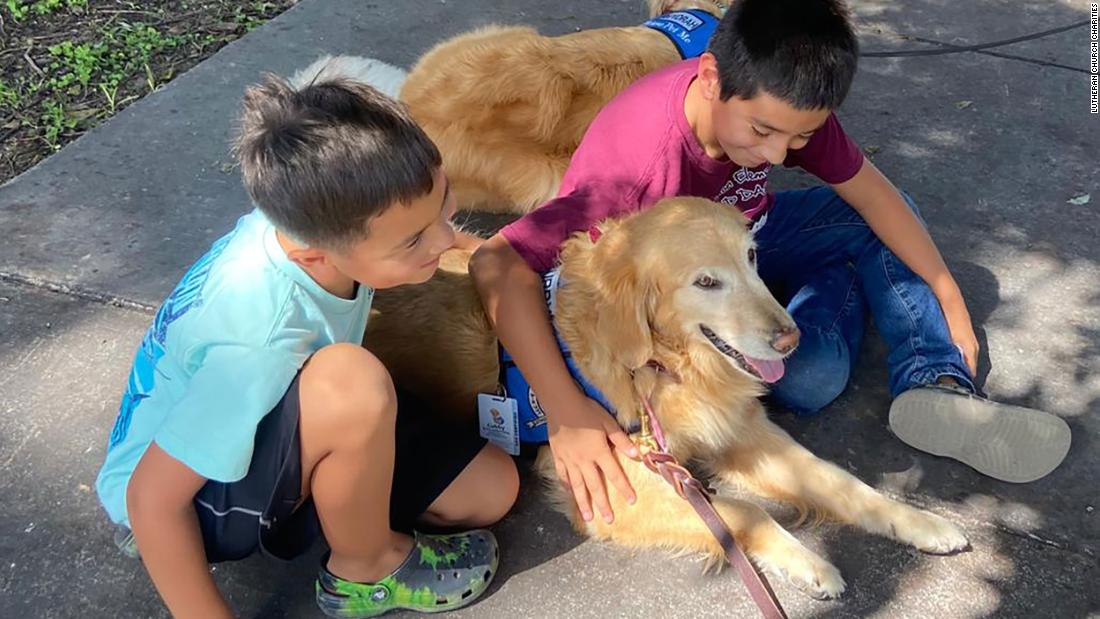 Since then, some students have not felt comfortable returning to a classroom.

As parents in Uvalde, Texas, dropped their children off at school Tuesday morning, some students did not want to get out of the car — but 10 golden retrievers from all across the country who work as comfort dogs were on site, helping ease nerves and provide a distraction, said Bonnie Fear, crisis response coordinator for the Lutheran Church Charities K-9 Comfort Dog Ministry. This is a different return to school than what the community has ever experienced.

“There was a lot of hesitancy and anxiety about getting out of the car and going into the school. So we placed the dogs outside, and I do believe that that did help some of the kids see that dog and go, ‘OK, well, I’m going to go pet the dog,’ ” said Fear, whose team also provided support to the community immediately after the shooting in May.

The Uvalde school district invited the ministry to bring back the dogs to offer comfort during the first three weeks of school. The 10 dogs will support eight schools; each dog has two handlers.

At some schools, the dogs greeted students outside. At one campus, the dogs sat quietly in a counselor’s office to help students in need, Fear said, and at a high school, the dogs were in a hallway.

“That will keep changing as the needs arise, as the kids get into their routine — and where the dogs are needed, the counselors will instruct us where to go,” Fear said. “Our goal is to be present with those that are hurting and in need, and we show up and just be with them in whatever they’re feeling.”

Comfort dogs have helped support communities affected by devastating gun violence for years. They were deployed to Newtown, Connecticut, after the shooting at Sandy Hook Elementary School in 2012. Canines were sent to Orlando, Florida, to provide comfort after the shooting at the Pulse nightclub in 2016 and to Parkland, Florida, after the Marjory Stoneman Douglas High School shooting in 2018.

The Lutheran Church Charities K-9 Ministry teams were at the site of each of those tragedies.

“We get invited, we show up, and we let the dogs do their work,” Fear said.

A growing number of studies suggest that spending time with a therapy dog can help reduce a hospital patient’s experience of pain, and among university students, directly interacting with a dog resulted in greater declines in anxiety and improved mood.

Of course, most experts stress that the benefit a comfort or companion animal provides is complementary to the medical or psychological therapy that the person gets.

“For those who have experienced trauma, dogs, and animals in general can help facilitate the healing process. Animals can help soothe fears and anxieties,” Angela Whittinghill, a child and adolescent behavioral therapist based in Jacksonville, Florida, at the pediatric behavioral health company Brightline, wrote in an email to CNN. She includes a comfort dog in her own therapy.

As people heal after tragedies, a variety of support interventions, no matter how big or how small, may need to be deployed.

“Returning to school after a tragedy such as that experienced in Uvalde, TX must be an extremely anxiety-inducing event for the children and staff. Making therapy dogs available to them would be one of the best ways to help heal the wounds, a much better option than providing talk-therapy alone,” Whittinghill wrote.

Whittinghill, who was born and raised in Honduras, added that the comfort dogs might be especially beneficial for the community in Uvalde, whose residents are predominantly Hispanic or Latino.

“Dogs are healers and these kids need healing, talking to strangers about our feelings isn’t something the Hispanic community is comfortable with,” she wrote. “In this case, therapy dogs would serve an even bigger purpose.”

Dogs can notice when someone is upset or needs help, according to Julia Meyers-Manor, an associate professor of psychology at Ripon College in Wisconsin, who has come to such findings in her research.

“We know that dogs can reduce stress through petting and even physical presence. We also know that animals can increase attendance at and willingness to accept therapy in both children and adults,” Meyers-Manor wrote in an email to CNN.

“My research on empathy suggests that dogs are sensitive to human crying and seek to make contact with crying individuals,” she wrote. “We know empathy of dogs isn’t the whole story though as people find comfort even in stuffed animals, pictures of animals, and even robotic animals.”

As for Uvalde, Meyers-Manor added that she thinks comfort dogs can help community members, especially children, in times of stress and anxiety — but it is important to keep in mind that some children might be allergic to or scared of dogs.

“We should be thoughtful about the dogs that we choose to use and how we implement them. … Not every child is comforted by a dog,” she wrote. “When used as an optional part of the school day though, I think they can bring some joy to the children.”

An area of emerging research

Scientific literature about comfort dogs dates to the 1950s and ’60s, when American psychologist Boris Levinson presented a paper to the American Psychological Association in New York City about how “the importance of the house pet” to humans was “psychological rather than practical.”

“He was a counselor of some sort. His dog happened to be around — this was in the ’50s — and he started to incorporate the dog in his work because the dog was assisting with developing a therapeutic relationship with his clients,” said Colleen Dell, an animal therapy researcher, practitioner and professor at the University of Saskatchewan in Canada.

Levinson has been described in research as “the first professionally trained clinician to formally introduce and document” the way companion animals might hasten the development of a rapport between therapist and patient.

Yet the widespread deployment of comfort animals — such as what has been seen in Uvalde and at other scenes of tragedy or disaster — remains fairly new, Dell said.

More research on comfort animals has emerged in the past decade, but it is not definitive, she said. For instance, some scientific studies suggest that peaceful interactions with a dog — such as petting the animal — can increase a person’s level of oxytocin, a hormone that reduces anxiety and blood pressure.

But “those few studies that are out there, they have mixed results. We have limited sample sizes and different ways researchers are analyzing their data and so forth. That’s not a bad thing in any way. It’s just an area that’s emerging,” Dell said.

“There’s just so much going on in this natural type of relationship or communication or connection between the patient or the participant and the dog,” she said. “And then it’s not just the dog, there’s a handler there — and there really haven’t been studies that are looking at the impact of that handler because they are mediating impact as well.”

Overall, Dell said, she thinks that making comfort dogs available to people who have recently experienced tragedy, like in Uvalde, can be beneficial if the person likes dogs.

“They are going to be a distraction,” she said of the dogs. “So just on that level, that can have a beneficial impact. And the comfort and support that the dog can provide — they can listen, they’re not going to pass judgment — that’s going to be really important, especially to the kids.”

Share
Facebook
Twitter
Pinterest
WhatsApp
Previous article
Republicans Continue To Put American Politics In A Shallow Grave
Next article
Mary Alice Should Have Been A Household Name. But She Wasn’t A Part Of White Hollywood.