Commentary: Congress may soon have its first Gen Z-er. He gives young people like me hope 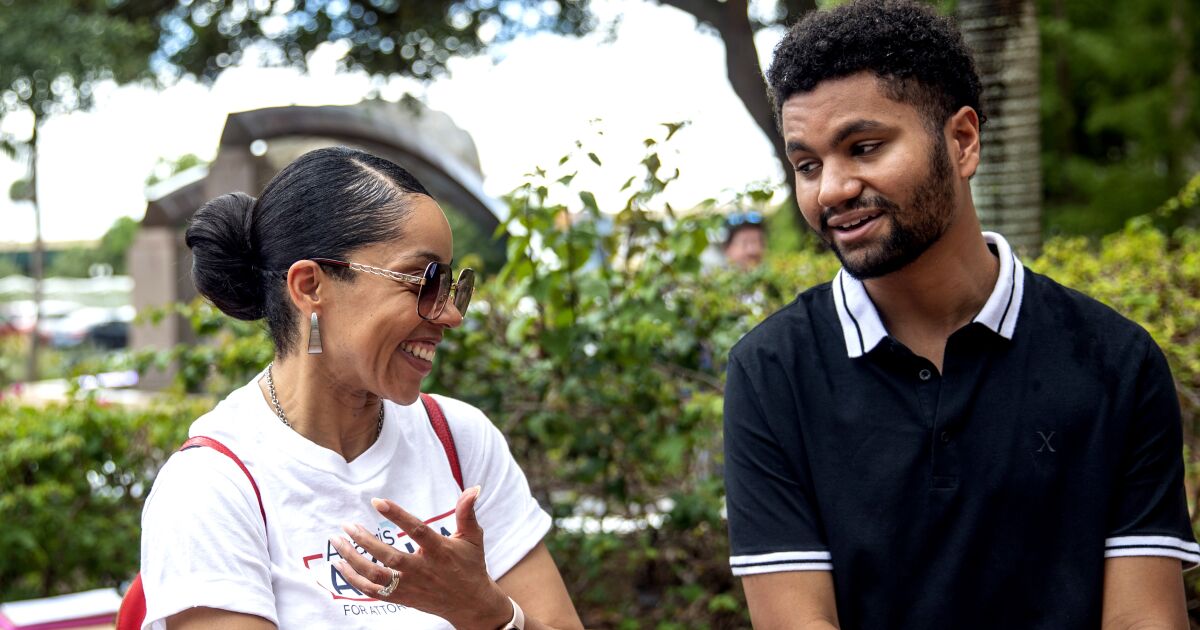 Maxwell Frost survived a shooting once.

It was 2016 and Frost, then 19, was attending an outdoor Halloween event in downtown Orlando when two men beside him began shooting at each other, sending hundreds scrambling. He escaped unharmed, but the incident became one of many moments that motivated Frost’s activism against gun violence — and now a run for public office. Frost is the first member of Generation Z to win a primary election for Congress in the U.S., giving young people across America fresh optimism about the fate of the country.

Frost won the Democratic nomination in Florida’s 10th congressional district in the Aug. 23 primary, beating two former Congress members and a state senator. This puts the 25-year-old on track for victory on Nov. 8 in the solidly Democratic district that includes much of Orlando.

Frost has been an organizer with March for Our Lives and the American Civil Liberties Union in the Florida campaign to pass a state constitutional amendment in 2018 to restore voting rights to 1.5 million Floridians with criminal convictions. He’s worked on Sen. Bernie Sanders’ and Hillary Clinton’s presidential campaigns, gaining experience while pursuing a political science degree, which he’s set to finish next year.

To make ends meet, Frost drives for Uber and lives with his mom and sister. Running for Congress while working for a living and without independent wealth is tough, Frost told me in a Zoom call recently.

But Frost says that reuniting last year with his birth mother, who gave him up for adoption to an Afro-Cuban household, and hearing her story about poverty and cocaine addiction, ultimately persuaded him to run for office to tackle those issues.

Frost is in some ways a poster child for a generation raised through economic anxiety, school shootings, racial injustice and a pandemic. His victory, youth experts tell me, wasn’t just a fluke. Data show Generation Z, defined as those born after 1996, experience unique anxieties, with 76% placing climate change as one of their biggest societal concerns. Almost a third have participated in a major environmental action, such as donating to climate change causes or attending a rally. They may also be the generation most likely to deal with mental health issues.

I’m a 19-year old college student, and Frost’s candidacy gives me hope that some of the issues affecting my generation will soon have a strong champion in Congress. He supports a ban on assault weapons, Medicare For All, the Green New Deal and other progressive policies that would benefit swaths of young people, who have some of the highest uninsured rates and own the least wealth at their age relative to older generations.

Frost seemed calm amid a deluge of media coverage after his primary win. He said his first move in Congress would be to support various gun control legislation.

“Ending gun violence has a special place in my heart,” Frost said, pointing to an art piece behind him, a drawing by Manuel Oliver, whose son, Joaquin, was killed in the 2018 school shooting in Parkland, Fla. “For me, it’s always remembering that behind every number, there’s a face, there’s a human.

“I know that headlines are mainly on my Uber driving and other things. But I’ve been in this work for 10 years, so I do understand how the system works,” Frost said.

As the youngest member of Congress, Frost would face pressure to balance the concerns of the Democratic establishment with those of the young and working class constituents he has courted. I’m not the only one who fears that the political system will water down his passion and positions, but the tides of congressional attitudes are shifting in his favor, according to John Della Volpe, director of polling at the Harvard Kennedy School Institute of Politics.

“I suspect the party’s gonna change to reflect Maxwell rather than Maxwell changing to reflect the current party,” Volpe told me.

Not that I agree with all of his stances. I’ll admit I was disappointed with Frost’s response to my foreign policy questions. He said he doesn’t see Israel as being an apartheid system, despite contrary claims from the Human Rights Watch and charges of war crimes. He added that he wouldn’t decrease the $4 billion in annual federal aid that the U.S. provides Israel.

Despite that, I think Frost, who won his primary without any special political connections, has the potential to show what happens when underrepresented, grassroots candidates win elections. We get moments like Rep. Cori Bush’s (D-Mo.) successful campout on the steps of the Capitol last year in protest of the expiration of the eviction moratorium.

“Because he will have the added burden of being the only Gen Z person, I think he’s going to feel the responsibility to say, ‘We can’t water down our values, we have to stand up for what we believe in,’” Ben Wessel, the former director of youth-focused organization NextGen Rising and friend of Frost’s, told me.

If Frost is elected in November, his victory will give momentum to the priorities of disaffected young people like me. Our concerns are not something Congress can take lightly anymore.