Commentary: More workers are trying to unionize. Support will be crucial to their success 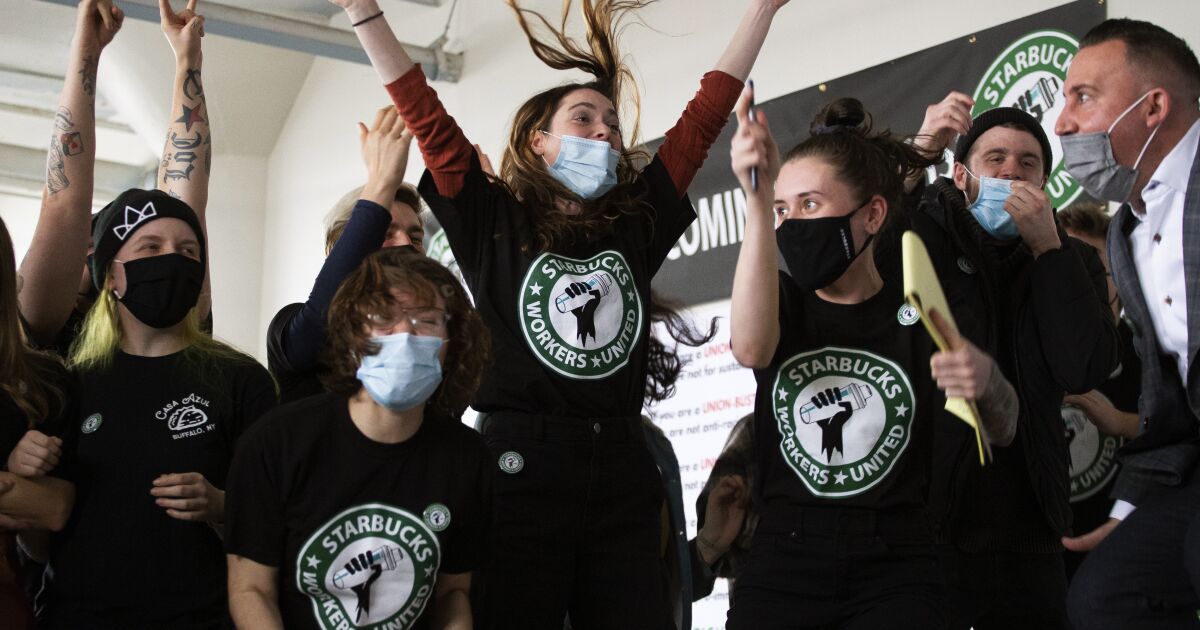 After two years of a pandemic that has revealed that making workers a priority is not considered essential, it’s natural to feel despondent about the state of the country’s laborers.

Look closer at the labor fights popping up at workplaces across the nation, though, and slivers of hope wiggle through: Unions are building movements that hearken back to the Gilded Age, when organized labor rose to counter the power of wealthy industrialists and the dire state of the working poor. This Labor Day, it’s especially important that Congress commit to addressing workers’ frustrations and exacting real consequences for labor injustice.

The victory of Christian Smalls, who formed the first union at an Amazon workplace in Staten Island, N.Y., in April, was perhaps the labor movement’s most energizing success this year. Smalls helped organize his former co-workers despite an aggressive anti-union campaign by the nation’s second-biggest employer. After months of litigation from Amazon, the labor union prevailed in court last week and is set to be certified.

Smalls’ success wasn’t an isolated incident. The number of union petitions filed with the National Labor Relations Board increased 58% between Oct. 1 and March 31, compared with the same period a year earlier, and there has been an increase in strikes since 2018, with the exception of 2020, when the COVID-19 pandemic began. Unsurprisingly, unfair labor practice charges have increased 14%.

The pandemic accelerated frustrations stemming from economic and social inequality. Some 22 million workers lost their jobs in the first two months of the pandemic, with the low-wage workforce disproportionately hurt and experiencing a slower recovery. The lowest earners have had the least access to paid leave should they get COVID-19.

It’s understandable why more workers are seeking the protections and benefits of union representation. Unions allow workers to bargain collectively for paid sick leave, safer work conditions and more equitable pay. Workers covered by a union contract earn 11.2% more than their nonunionized counterparts, with Black and Hispanic workers receiving larger boosts, according to the Economic Policy Institute. Research finds that the Black-white wealth gap has grown in tandem with a decrease in union membership, suggesting that reversing the decline could help increase racial equity.

Part of the puzzle of American labor is a mismatch between wide popular support for unions, with 71% of Americans approving of unions, according to a recent poll, and a dismal national union membership rate of 10%. One problem is that the United States imposes penalties for labor violations that are far too weak to force corporate compliance.

If workers seek to unionize, their first option is a democratic election, facilitated by the National Labor Relations Board, that requires a majority vote by employees. The second route is through neutrality agreements, in which a company voluntarily recognizes a union based on evidence that most employees want to unionize.

Companies can appeal union elections and launch union-busting campaigns to intimidate or fire workers. Though companies are charged with violating federal labor laws in about 42% of union elections, the consequences often amount to low fines, or nothing at all. Current labor law doesn’t impose civil and punitive damages for companies that fire workers for organizing activity and it allows employers to enforce mandatory meetings to spread anti-union messaging. All of this, in addition to the time and costs required to unionize, creates significant barriers to unionization. Even after a union wins an election, getting a contract can take months as companies fight workers in court.

“No matter what we tell workers when they start organizing a union, they always come back to us and say, ‘You really never told me it’s gonna be this bad,’” Kurt Petersen, co-president of Unite Here Local 11, which represents hotel, airport and service workers in Southern California and Arizona, told me.

Employees need determination to fight for work conditions and confidence that if they fail to unionize, they can get another job, Suresh Naidu, a professor of economics at Columbia University, said. The current environment, with low unemployment and high demand for workers, can be helpful in union organizing. What’s less clear is whether the movement will continue if there is a recession and unemployment rises.

Legislation will be key to leveling the playing field. The Protect the Right to Organize Act, a sweeping bill that would revamp federal labor laws to make unionizing easier, passed the House last year but has since stalled in the Senate. It will need the backing of Arizona Sens. Kyrsten Sinema and Mark Kelly, the only Senate Democrats not to co-sponsor or voice public support for the bill.

The future of American workers might look bleak, but the rise of victories, like the Amazon Labor Union, portends greater wins for workers. They’ll need everyone on board to succeed.