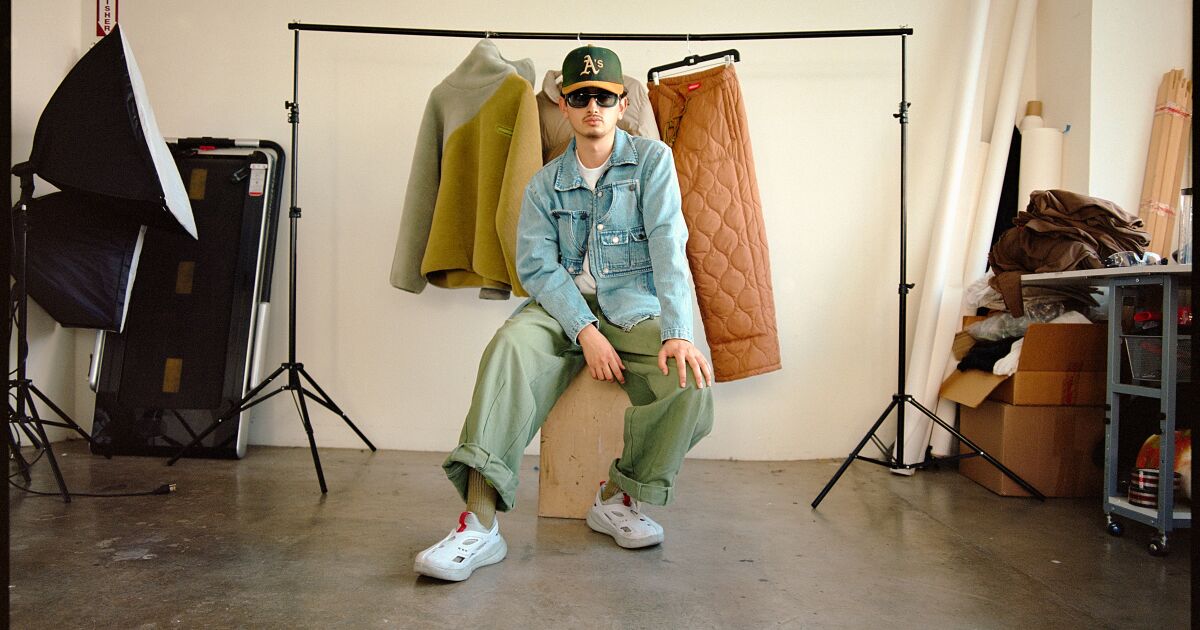 Sustainability, for designer Tommy Bogo, is about providing a lens to see the world differently. One idea he has been exploring through his work is healing. When his TOMBOGO collection Nature Is Healing debuted at New York Fashion Week last year, models emerged through the skeleton of a greenhouse in earth tone parachute pants, vegan leather tote bags and wood-grain knitwear sets. Flanked by houseplants, they picked up books and walked out, symbolizing the end of our pandemic isolation period and a return to the outside world.

Since 2019, TOMBOGO has used sustainable materials to transform multifunctional pieces into collections that are young, earthy and designed to the beat of world events. Nature Is Healing was a critical spin on what are now classic pandemic memes: scenes of Lime scooters dumped into lakes, dinosaurs in Times Square, polar bears on lawns in Ohio. Bogo’s collection invoked the surrealness of rushing back to normalcy while paying homage to the necessity of nature.

An artist has many canvases. Beyond his collections made with thoughtful materials, Bogo works across media, objects, concepts. He often drops his own takes on products like LED sunglasses, digital cameras, even electronic repair goggles. Design is the space where Bogo pursues his artistic inclinations and obsessions. “Design starts for me with taking something that I like or am inspired by and trying to make it into something new and functional, like adding functional features, and then exploring materials and how we can incorporate sustainable materials into that,” he says.

The who-wore-TOMBOGO-best reel runs deep: Khalid, Bad Bunny, Kid Cudi and Kehlani are just a few who have been caught in the threads. Bogo has designed pop-ups that doubled as events for rapper Larry June. Oakland music producer Drew Banga collaborated on a custom track for one of his shows. “Euphoria’s” Angus Cloud is a rotating model. TOMBOGO lookbooks have featured rapper Guapdad 4000.

Fresh off a shoe release event in Paris and a Saucony collab that sold out in minutes, Bogo is in the middle of preparing for New York Fashion Week. When we met at his DTLA studio, he was mostly tight-lipped about the launch, but he did say this upcoming collection is inspired by his formative years in Oakland.

Bogo can’t fully credit the Bay for what has become of TOMBOGO. After a stint in New York he’s been in L.A. for two years and has found inspiration in Paris, Japan and Italy. At 28, Bogo wants his upcoming collection to tell a story about his evolution from high school kid selling shirts out of the trunk of a car to global designer.

“I think that initial Bay mind-set at least got me to where I am at the moment,” he says. “But now I’ve entered this other arena, and the next chapter begins.”

Bogo’s parents worked in fine art, but they encouraged him not to follow the same career path. They did the starving artist thing and didn’t want that for him. But Bogo wasn’t interested in many of his academic classes at Oakland Technical High. He played the saxophone and his friends made music. He was an avid skateboarder and adorned himself in skate brands. He sketched all the time. One day he turned his sketches into screen prints, brought a crop of T-shirts to school, and made $100. This doesn’t seem so much like the starving artist career that my parents were talking about, he thought.

He was inspired by his parents while following their advice to choose a stable career path. After high school, he studied visual communications and product design at San Francisco State University. Outside school, Bogo’s friends were exploring their creative paths too, and he split his time between design and collaborating with musicians. “A lot of these artists became big artists; this was years and years ago, before any of us knew what we were doing,” he says.

The Bay’s gravitational pull is strong: its artists and musicians, the lessons it taught him. Oakland was where he picked up a scrappy mind-set that helped him get things done with whatever resources were available.

Bogo creates from a place of problem solving. He designed his recently debuted Butterfly, in collaboration with Saucony, as a response to headline he read about a runner completing a half-marathon in Crocs. “I thought, That’s cool, good for him,” he recalls. “But his feet probably hurt after that.” He designed the shoe to be comfortable like a rubber clog and sneaker-like enough to support a run.

The street-to-club vibes of L.A. or New York City are captured in women’s crop tops that convert into five different styles. Chore coats with removable sleeves and sherpa bucket hats hint at an upgrade to Bay Area fashion, where the fog rolls in and makes you miss your jacket, or where it’s not unusual to spot fleece pants at a fancy brunch.

Next, he has his eyes on working with sustainably made denim.

Bogo is a storyteller at his core. Since he started designing by collection, his ability to create narratives through clothing has crystalized — most potently around the pandemic. His Fall 2020 collection took aim at the ways we adopted a freelancer-type mentality in the pandemic. Fleece-lined cargos anchored a Comfort Zone capsule released in early 2021, designed for maximum coziness from outside to inside. Conceived while Bogo moved from coast to coast during the pandemic, pieces from Lost & Found featured thrifted vintage fabrics and heavy wools and knitwears representing the security and stability that emerged through his travels.

Nature Is Healing was possibly the most cohesive representation yet of the brand’s ethos around sustainability and collaboration. His friend Leon Xu, an artist and San Francisco native, spearheaded the show’s set design. An ethereal custom track from Oakland R&B artist Elujay swirled through the air. Recycled nylon fabrics were juxtaposed with patterns inspired by leaves and wood.

“It’s really those things I’ve just been doing naturally without putting a label on it that have become the core pillars of the brand,” Bogo says.

Following those inclinations, Bogo pours his creativity into products beyond clothing. He’s made branded spray paint, a carabiner that doubles as a compass and bottle opener, packing tape styled like a ruler dubbed “measuring tape.” It’s nothing new for him: as a kid Bogo customized random objects, putting a paintbrush to a disposable camera for instance and gifting it to his mom. The NostalgiaCam, a branded a 1080p camera outfitted with a custom welcome sound and screen is one of his latest expressions. It’s a better nod to the reemergence of Y2K style than trucker hats and low-cut jeans, and a tool for his audience made up of creatives and artists.

“To provide my own version of these tools that we all use on the day-to-day is really an exciting concept to me,” he says.

The most pivotal piece for Bogo may have been his LED scouter glasses, which have since evolved into a TOMBOGO and J Balvin collaboration of heavy-duty lenses in a rainbow of colors equipped with adjustable sizing and LED on each lens. In the early days of his brand, when the designer had only 3,000 Instagram followers, J Balvin slid into his DMs interested in copping a pair. Bogo hand-carried them to the Colombian singer’s New York apartment.

“Nothing had really popped off yet. It just blew my mind that something I made got to him and he took note of it and then went out of his way to reach out,” he says.

The fact that something he designed could intrigue the superstar made him think his journey as a designer may have reached a turning point. It proved to be a valuable lesson illustrating the connections Bogo can make to the rest of the world by using design as a canvas of his introspection.

“When I design, I just try and design through my own lens but find things through that lens that other people can understand,” he says.

Ferron Salniker is a food and culture writer with a focus on identity, origins and the systems. She also pro- duces food and spirit events across the country. She grew up in Oakland and is based in Los Angeles.

CeramicsFest is back in the city after a two-year break

How to care for your leather wardrobe items | Fashion Trends