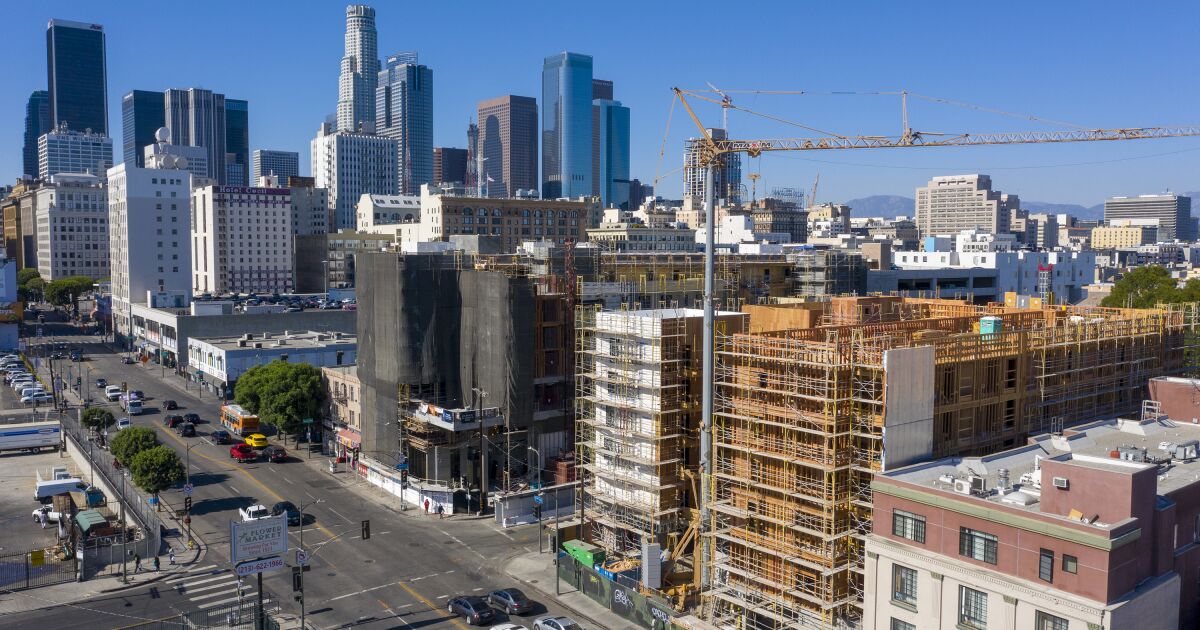 This year Gov. Gavin Newsom can chip away at one of the biggest barriers to building more housing, more cheaply. All he has to do is buck the naysayers, including from Los Angeles, and sign Assembly Bill 2097 to eliminate parking requirements in new development near transit.

Most cities demand that residential and commercial developments are built with lots of on-site parking, no matter if the spots are needed or desired. When the construction cost of a parking spot can be as high as $55,000 in urban areas like Los Angeles, and cities typically mandate one or two spaces per unit in residential developments, some building projects won’t pencil out unless they are designed and priced as high-end units.

5:40 p.m. Sept. 9, 2022An earlier version of this story stated that developments with 20 or more units would have to dedicate 20% of the units as affordable. Rather, the bill says developers could dedicate affordable units to avoid parking requirements, if those are imposed.

In communities resistant to new development, strict parking requirements can be a de facto way to block apartment buildings and lower-income housing. Even cities without nefarious motives often cling to parking requirements because Californians have come to expect abundant free parking around homes and businesses.

But that mindset — that everyone drives everywhere all the time — conflicts with the state’s climate and livability goals. California is investing billions of dollars a year to expand public transit and promote walkable and bikeable communities so people can get around without a car, which will reduce the greenhouse gas emissions responsible for climate change.

AB 2097 by Assemblymember Laura Friedman (D-Glendale) is an important step in California’s housing and climate policy evolution. The bill would eliminate parking requirements in new residential and commercial developments within a half-mile of a transit stop. Builders could still choose to provide parking — and many probably would — but the number of spaces would be determined by market demand, not by a blanket requirement.

The bill would allow cities to impose parking requirements if they can demonstrate the project would negatively affect parking in the area or make it harder for the locality to hit its affordable housing development targets. That could be a problematic loophole if it’s used by NIMBY cities to block projects, but it was one of several concessions accepted to keep the bill alive. (Under the bill, developers could dedicate 20% of the units as affordable to avoid parking requirements if imposed.)

State lawmakers have been considering proposals to eliminate parking requirements near transit for a decade. This year is the first time a comprehensive bill has passed the Legislature. Now that the bill is on the governor’s desk, there is opposition from a surprising corner — Los Angeles’ pro-housing, pro-environment Mayor Eric Garcetti.

In the last days of the legislative session, Garcetti sent a letter warning that getting rid of parking requirements could deter developers from participating in the city’s incentive programs, in which builders are allowed to construct bigger projects with less parking if they include affordable units. Since 2015, the city has gained 15,000 affordable units through incentive programs.

But supporters of the bill say Garcetti’s concerns aren’t backed up by experience. In 2019 San Diego eliminated parking requirements for residential development near transit and saw a boom in the use of the city’s incentive programs and an increase in the development of affordable units. San Diego Mayor Todd Gloria has supported AB 2097.

But AB 2097 isn’t just about housing. It would also eliminate parking requirements on transit-adjacent commercial development. That’s important if California wants to support the growth of compact, walkable communities. Steep parking requirements can make it harder to revitalize vacant properties and older commercial corridors — often built before the era of mandatory parking minimums. Parking requirements end up forcing businesses to dedicate property to cars rather than, say, al fresco dining.

California leaders have demonstrated they are ready to break the old paradigm of car-focused development so we can have more sustainable, affordable and livable communities. There’s a lot more work to be done, but with his signature on AB 2097, Newsom can help California take another monumental step in that direction.

Tyonthar SDOP going towards Sohagi riding in Scorpio collided with a standing truck from behind, condition critical. Accident on Rewa-Prayagraj road: Teonthar SDOP...

Tyonthar SDOP going towards Sohagi riding in Scorpio collided with a standing truck from behind, condition critical. Accident on Rewa-Prayagraj road: Teonthar SDOP...