Editorial: Get ready for the Nov. 8 election 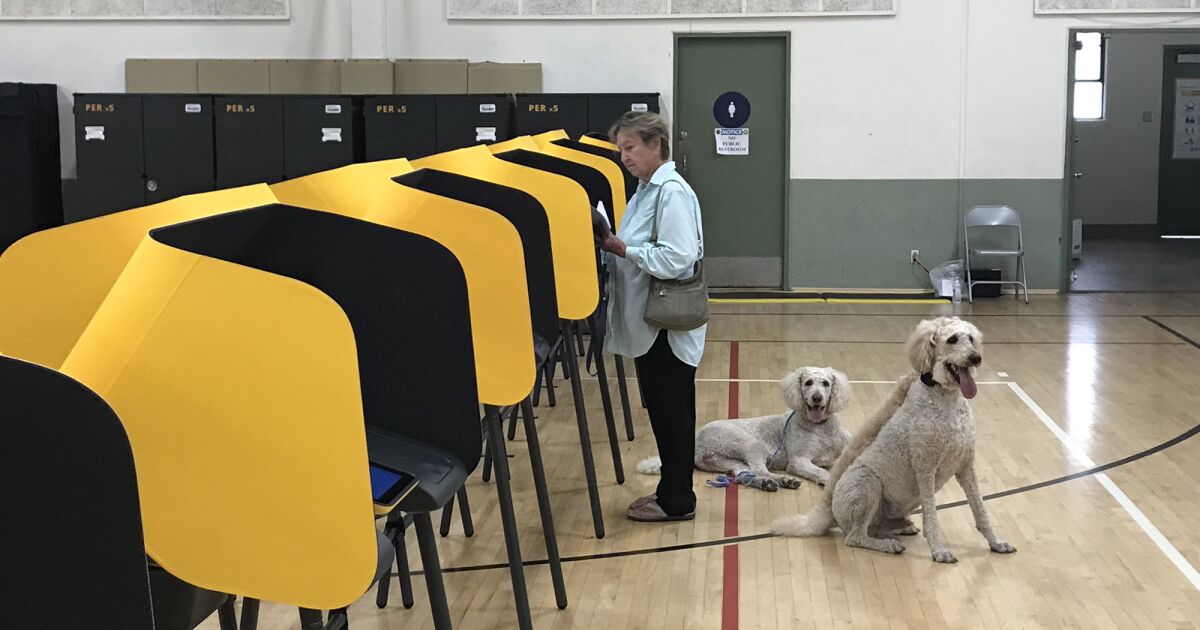 It’s that time again. The Nov. 8 general election is less than 10 weeks away, but if the date slipped your mind, don’t worry. After Labor Day — the unofficial start of election season — you will be bombarded with so many campaign ads that Nov. 9 will come as a relief.

Every election is a scramble by campaigns to get the word out on their candidates and propositions. But those messages, particularly when it comes to ballot measures, can be confusing, contradictory and downright misleading. The state’s system of direct democracy may have begun as a populist tool to circumvent corporate influence on the Legislature, but these days, initiatives are where special interests spend big money to pass their own laws and regulations at the ballot box.

The Times will begin publishing our endorsements this week. We’ve been doing the reporting and interviews to cut through the campaign hyperbole and offer carefully researched opinions on the ballot measures and major races locally and at the statewide level.

The groups poised to profit or lose market share if one or both measures pass — including online sports betting companies, Native American tribes with casinos, horse-racing tracks and card rooms — are expected to pour even more money into mailers and ads.

There are other major decisions facing voters. Following the U.S. Supreme Court’s decision to overturn the Roe vs. Wade, Californians could guarantee the right to an abortion in the state constitution with Proposition 1. Proposition 30 asks voters to raise taxes on wealthy residents to help pay for charging infrastructure and electric cars — including for companies facing zero-emission vehicle mandates, such as ride-share company Lyft, which is bankrolling the measure.

Proposition 28 would carve out money from the state budget to pay for arts and music education. And Proposition 31 would uphold a state law passed in 2020 that banned the sale of most flavored tobacco products. And if Proposition 29 feels like deja vu, that’s because it’s the third attempt by the Service Employees International Union-United Healthcare West to impose new regulations on dialysis clinics.

For November’s general election, we will endorse in some statewide races that we skipped during the June primary. We’ll also make recommendations in some additional legislative and congressional races. The editorial board, which is part of the Opinion section and separate from the newsroom, endorses selectively, trying to focus on the most competitive races across the region and the state.

In Los Angeles, voters will decide whether Rep. Karen Bass or businessman Rick Caruso will be their next mayor. Bass, whom The Times recommended in the primary, has a double-digit lead in recent polls. But don’t count out Caruso; he dropped a record-shattering $40 million from his personal fortune in the primary and could flood the airwaves and mailboxes again to make his pitch. Voters will also decide the next city attorney, city controller — and several key council races that could shift the balance of power in City Hall.

Los Angeles County voters could oust ethically challenged Sheriff Alex Villanueva in favor of former Long Beach Police Chief Robert Luna. Voters will also consider a ballot measure, inspired by county leaders’ frustrations with Villanueva, that would give the Board of Supervisor’s the power to remove a sheriff.

Gov. Gavin Newsom is running for a second term. But so far, he seems to be campaigning against Florida Gov. Ron DeSantis, rather than Republican state Sen. Brian Dahle, who’s the challenger on the ballot. Newsom has used his reelection campaign funds to pay for television ads in Florida and has contributed $100,000 to Rep. Charlie Crist, the Democrat running for Florida governor. Other statewide offices are also on the ballot, including attorney general, secretary of state and superintendent of public instruction.

We’ll begin publishing endorsements this week and continue through early October, when voters receive their ballots in the mail. We welcome your thoughts and feedback.

Share
Facebook
Twitter
Pinterest
WhatsApp
Previous article
Letters to the Editor: Blacks and Latinos have a shared history. Teach it in schools to fight racism
Next article
Editorial: Newsom’s water supply plan is only half-full