Editorial: Give fast-food workers some say on the job 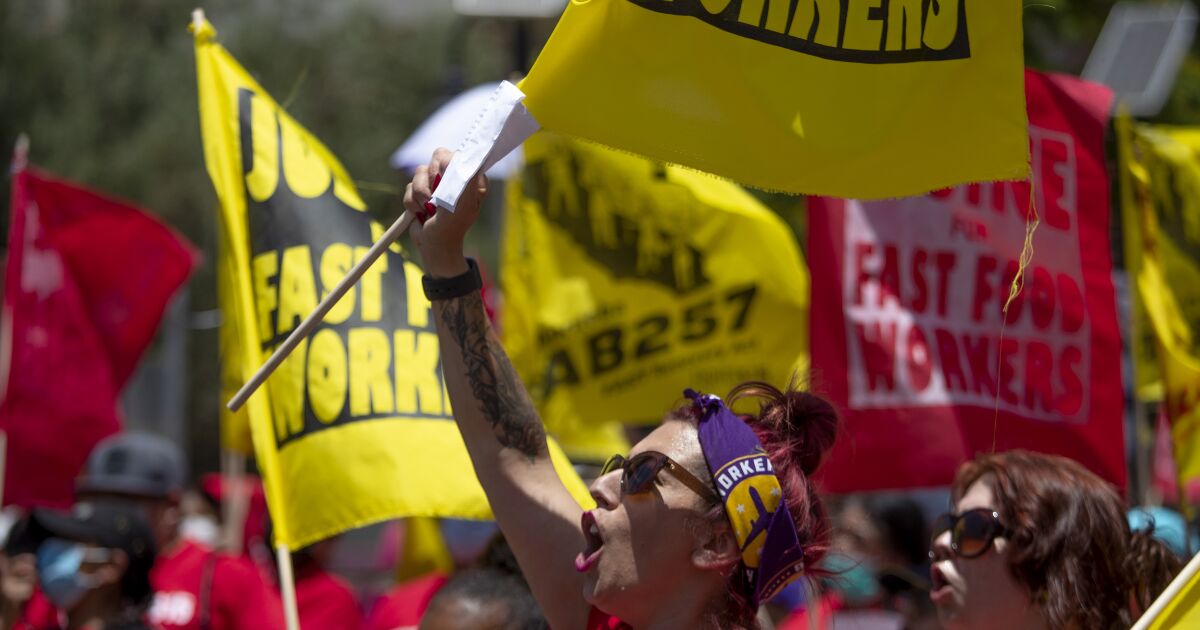 Labor unions are having a moment.

Following high-profile efforts over the last year to organize workers at Starbucks coffee shops and Amazon warehouses, retail workers across the nation have voted for the first time to join unions. Just this summer, it happened at an Apple store in Maryland, REI stores in New York City and Berkeley and Trader Joe’s markets in Massachusetts and Minnesota.

But fast-food workers have been largely left out of the current trend toward unionization of low-wage workers, though they may need it more. The low pay and unpredictable schedules that are typical at fast-food joints have understandably made these workers hunger for more say in their working conditions. California fast-food workers earn 85 cents on the dollar compared with service workers at retail chain stores in the state, according to a study by researchers with Harvard and UC San Francisco — a difference that amounts to almost $6,000 a year. Fast-food workers in California earn about $31,050 a year, the report says, which is not enough to get by in this expensive state. And fast-food workers are also more likely than other service workers to have their schedules changed at the last minute, making it difficult to arrange child care, go to school or hold an additional job.

These workers, most of whom are women and people of color, deserve a way to seek more stability and better pay. But the franchise business model that’s common at fast-food restaurants — dispersing ownership across numerous sites that bear the same brand name — has made it difficult for workers to organize unions. Under a federal labor rule put in place during the Trump administration, the parent company is typically not obligated to bargain with workers at a franchised business.

So California is on the cusp of experimenting with a new system — a statewide council made up of fast-food workers, franchisees and franchisors that would set minimum standards for wages, hours and working conditions for people who work at restaurants with at least 100 locations nationally. It doesn’t directly form a union for fast-food workers, but sets the stage for that possibility down the line. Lawmakers sent this proposal to Gov. Gavin Newsom in Assembly Bill 257. He should sign it into law and give fast-food workers a voice in shaping conditions for their industry across the state.

Fast-food restaurants predictably lobbied against the bill, saying it will increase their costs, subject them to additional lawsuits and force them to raise their prices. But in the last week lawmakers made important concessions that should mitigate the industry’s biggest concerns while still providing a meaningful opportunity for workers to improve their lot. They deleted a portion of the bill that would have allowed workers to sue not only the owner of their local franchise but also the parent company. And they added a cap on the potential wage increase to $22 an hour next year — a significant increase from the $16.21 hourly average most California fast-food workers now earn, but still a guardrail that business owners can plan around.

Will prices go up for burgers, fries, pizzas and tacos? It’s possible. The restaurant industry released a report from the UC Riverside Center for Economic Forecast and Development saying fast-food restaurants would have to raise prices between 7% and 22% under the earlier version of the bill. But the addition of a ceiling on wage increases should blunt the need to dramatically hike prices.

At the moment, a bacon cheeseburger at a Burger King in California typically goes for $1.91, according to the Fast Food Menu Prices website. Taco Bell sells its Beefy 5-Layer Burrito for $2.16, while a chicken sandwich costs $3.90 at Chick-Fil-A. Even if restaurants raise prices modestly, fast food will remain a low-cost option. And if customers paying a few cents more for a sandwich allows fast-food workers to keep the lights on at home, avoid being evicted or get off food stamps, that’s money well spent. Full-time workers should earn enough to get by.

Share
Facebook
Twitter
Pinterest
WhatsApp
Previous article
Op-Ed: Sarah Palin lost her bid for Congress. But we may not have seen the last of her yet
Next article
Op-Ed: The nuanced political views among diverse Latino voters are overlooked