Endorsement: No on Propositions 26 and 27. Legalizing sports betting stacks the odds against Californians 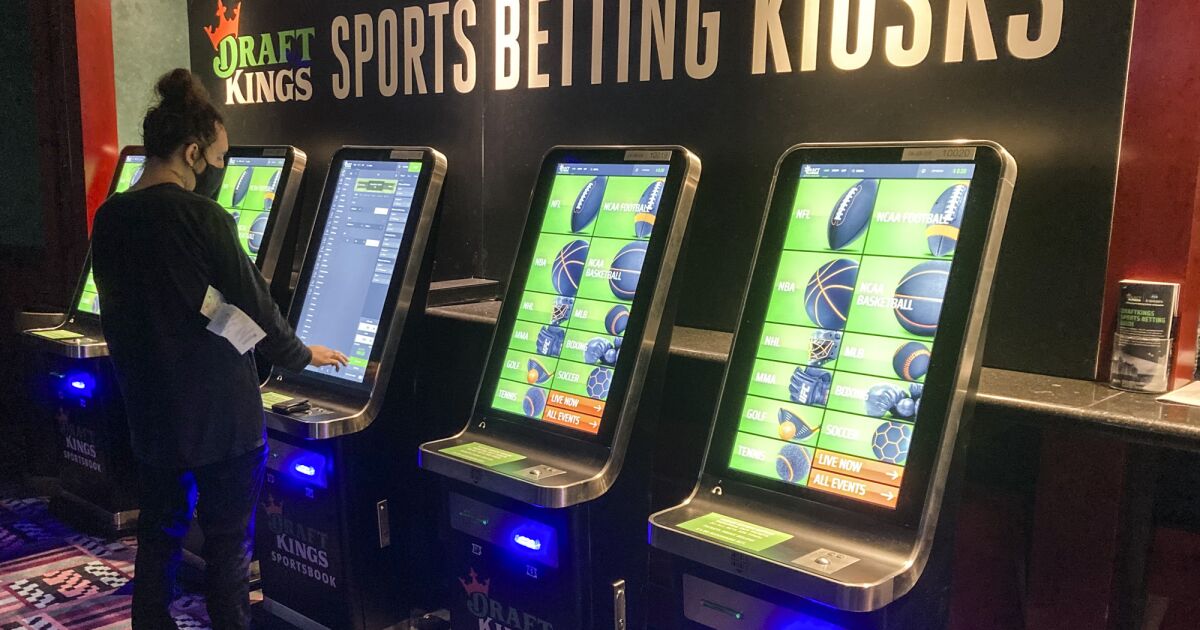 Since the U.S. Supreme Court ruled in 2018 that states can allow sports betting, legal gambling has exploded across America — leaving some predictable problems in its wake.

Many of the more than 30 states that permit sports betting — including Michigan, Virginia and Connecticut — have seen spikes in demand for services to help people addicted to gambling, often without resources to respond adequately. Online gambling has become prevalent among high school students, even though the age for legal betting ranges from 18 to 21 depending on the state. And the amount of money some Americans now blow on sports bets should raise concerns about their financial health. In just one month last year, sports gamblers wagered $7 billion — a 20-fold increase from three years earlier. That’s money they’re not spending in other parts of the economy, or worse, money they borrowed that they may not be able to pay back.

If the companies that own betting platforms and the tribes that run casinos have their way, California will be the next state to embrace this foolish scheme. Voters should prevent that from happening by rejecting Proposition 26 and Proposition 27 on the Nov. 8 ballot. These two competing measures would allow sports betting in California, though in different ways, and both would usher in a troubling expansion of gambling.

Proposition 26, backed by several Native American tribes that run casinos including Pechanga and Agua Caliente, would allow sports betting in person at four privately owned horse-racing tracks and at tribal casinos that reach agreements with the state. It would also expand the types of games allowed at Indian casinos to include roulette and craps.

Proposition 27, backed by several betting platforms including DraftKings and FanDuel, would allow sports betting online on sites run by California tribes or large companies that partner with them. It would also allow wagers on awards shows and other nonathletic competitions.

That would essentially turn every cellphone, tablet and computer into a legal casino where bets could be placed with a few taps on an app.

The pervasiveness of the technology and the familiarity many people feel with sports may make online sports betting more addictive than other types of gambling, experts have found. First there is the ease of pulling a gambling device out of your pocket compared with the hassle of traveling to a casino. Then there’s the fact that people who follow teams tend to believe they have superior knowledge that compels them to bet more than they might at a card table or slot machine. Research comparing people who bet on sports with people who place other types of wagers “found that sports bettors are at greater risk of problem gambling,” according to a study published in the Journal of Gambling Studies.

Proposition 26 avoids the issues with internet-based gambling but presents other problems. A provision that makes it easier for card rooms to be sued amounts to the latest salvo in a long-standing feud between Indian tribes and card room operators over which venue has the rights to offer a certain type of game. Advocates for the humane treatment of animals are concerned that by allowing sports betting at horse racing tracks, Proposition 26 would prop up a cruel industry that has waning public support.

Although Proposition 26 aligns with California voters’ past support for allowing gambling on tribal land, the measure amounts to a toxic brew of industry interests designed not only to enrich the funders but also to push away their competitors. If California ever decides to embrace sports betting, it should be with a framework that is as evenhanded as possible, and not one that so blatantly picks winners and losers.

One argument from supporters of both measures is that sports betting is happening everywhere, whether legal or not, so California would be better off regulating and taxing the practice rather than relegating it to the shadows. Legalization will tamp down the black market, they say, and create a gusher of tax dollars for the state.

This sounds good, but California’s experience legalizing cannabis shows there is reason to be skeptical. The same arguments were made in 2016, when voters approved recreational marijuana. But in the six years since then, the black market has continued to thrive. About three-quarters of the weed sold in California is illegal, and legal sellers say all the taxes they face make it hard to compete with illicit drug dealers.

Though Proposition 27 aims to reduce illicit betting by making people who use illegal websites pay penalties and creating a new enforcement unit at the state Department of Justice, an expert at the UCLA Gambling Studies Program said he’s not convinced it will meaningfully curb the black market. Other states that have allowed online sports betting still contend with a lot of unregulated online betting, said psychiatry professor Timothy Fong, and he does not think it will go away in California.

Continued activity on the black market could mean the tax dollars generated by sports betting would be more of a trickle than a gusher. Again, we are reminded of the cannabis legalization campaign, which promised that taxing weed would deliver loads of new funding for programs to help youth and prevent substance abuse. In fact, tax revenue has come in lower than expected and the state just lowered tax rates because the legal marketplace is such a mess.

The amount of new tax money that would be generated under Proposition 26 is uncertain, the nonpartisan legislative analyst says, “but could reach tens of millions of dollars annually.” It would be spent on schools, gambling addiction programs, sports betting enforcement and the state’s general fund. Racetracks that offer sports betting would pay the state 10% of the bets made, while tribes would negotiate their tax payments in agreements with the state.

Proposition 27 is likely to yield more tax revenue — potentially up to $500 million a year, according to the legislative analyst — but the figure is also uncertain. Tribes and companies that offer sports betting would pay a 10% tax on bets made. They would also pay licensing fees pegged at $10 million for tribes and $100 million for corporations. The taxes generated would first go toward regulating the sports betting industry. Remaining funds would be used primarily to address homelessness, by, for instance, subsidizing affordable housing, emergency shelters and navigation centers. A sliver of the funding — 15% — would go to tribes that are not involved in online sports betting.

Voters are rightfully upset about the huge number of Californians who don’t have a roof over their heads. But don’t be fooled into thinking that Proposition 27 is going to solve homelessness. As the state budget overflowed with surplus dollars the last two years, California lawmakers committed $13.5 billion to provide shelter and services to people who lack homes. Taxes from sports betting would provide an ongoing source of funding, but the amount may not wind up being a game-changer.

What’s worse, it’s possible that legalizing an addictive form of gambling could lead more people into penury and needing government services, which would erode how much the state actually nets. “Online sports betting could make it more difficult for people with gambling addictions to avoid placing bets,” the legislative analyst wrote. “This could increase the number of people who might need government assistance.”

Sports betting has become more socially accepted in recent years, so some might look at Propositions 26 and 27 as indicative of a cultural evolution. Perhaps. But it’s an evolution spurred by greed.

The normalization of sports betting has been egged on by betting platforms, athletic leagues and media companies, which see profit in convincing people to gamble away their dollars. That’s why gambling interests are pouring hundreds of millions of dollars into Propositions 26 and 27 — blasting through past spending records on state ballot measures.

California doesn’t need more gambling or more lawsuits. Propositions 26 and 27 present more risks than benefits, which makes both of them a bad bet. Vote no.