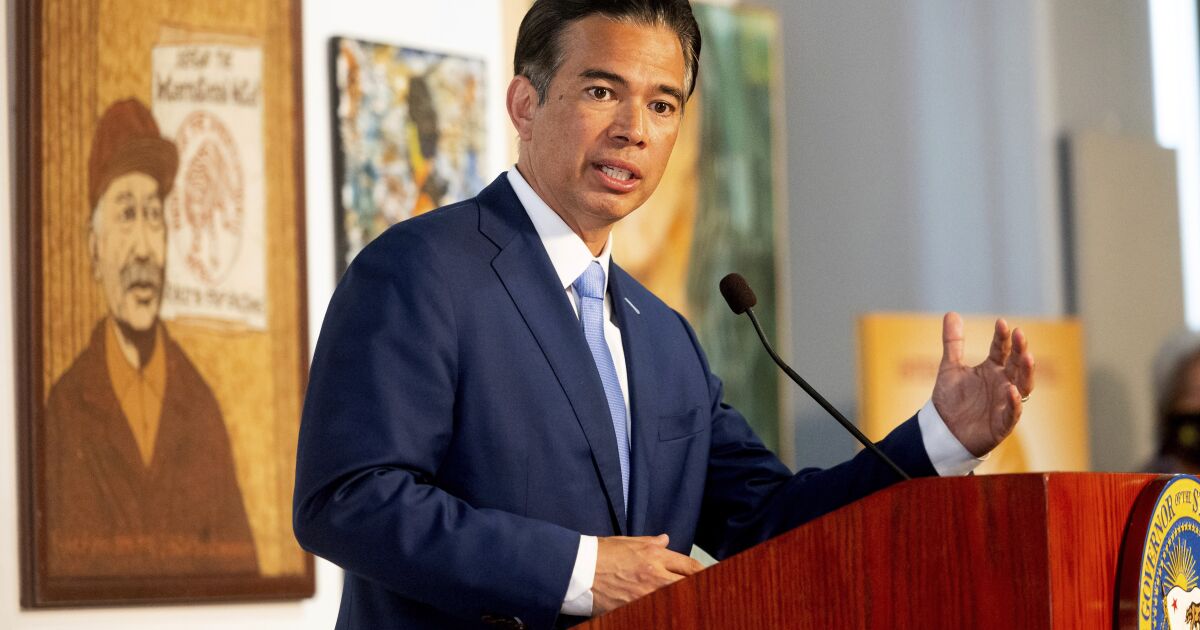 When he was in the state Legislature, Rob Bonta was known to have his eye on the job of state attorney general and was widely spoken of as a top prospect for the office. He is currently California’s incumbent AG because Gov. Gavin Newsom appointed him to fill a vacancy, and he has yet to be elected to the post, although he won 54.3% of the vote in the June 7 primary.

That’s an astonishingly strong finish in a field of five, though perhaps unsurprising given that he was the race’s only Democrat in this overwhelmingly blue state.

In the Nov. 8 general election, he faces Republican candidate Nathan J. Hochman, a former federal prosecutor who came in second in June, with just over 18% of the vote. Bonta is expected to win handily. But that doesn’t answer this: Of the two, would Bonta make the better attorney general?

Yes. As we said in the our endorsement of him in the primary, Bonta has done a solid job in his year-and-a-half tenure, helping California advance its interests in some of the top issues of our time, including gun proliferation, abortion rights, housing and climate change.

These topics and others are central to the nation’s increasingly divisive political debate, and voters might well ask whether California’s chief law officer (as the state Constitution describes the position) and criminal prosecutor ought to leave political issues to Congress and the state Legislature and avoid blatant partisanship to the extent possible.

Yet partisanship is baked into this elected statewide position and can’t be ignored. The often blurry line separating law and politics grew less visible this year, especially on abortion and guns — areas in which the rights of Americans shifted drastically because of Supreme Court rulings.

The court overturned a nationwide right to abortion in Dobbs vs. Jackson Women’s Health Organization — a case brought by Mississippi Atty. Gen. Lynn Fitch, that state’s first elected Republican in the partisan position in more than 140 years. The court struck down New York’s 1911 concealed weapons law (and in effect invalidated or jeopardized gun laws in other states, including California) in New York State Rifle & Pistol Assn., Inc. vs. Bruen, defeating the state, which was represented by an appointee of New York’s Democratic attorney general.

Both cases drew political battle lines, with attorneys general from other states submitting briefs that sometimes read as much like partisan position papers as legal pleadings.

Unlike the federal government, in which the U.S. attorney general is an appointed member of the president’s Cabinet, the attorneys general of 43 states (including California) are elected officials who run independently from the governor in partisan races and take partisan stances — and file or threaten to file often transparently partisan lawsuits — on questions such as the validity of the 2020 presidential election, in which Joe Biden defeated Donald Trump.

For example, Texas Atty. Gen. Ken Paxton — under indictment on federal charges of securities fraud — sued (unsuccessfully) to invalidate the results of the presidential election in Georgia, Michigan, Pennsylvania and Wisconsin. When Paxton’s own solicitor general objected to the suit, the attorney general hired another lawyer to file it. (When he was California’s attorney general, Xavier Becerra signed on to an amicus brief against Texas.)

In such an environment, Californians need their rights and values to be defended by a vigorous advocate who is not shy about going to court or asserting leadership among the states.

Bonta’s brief record in these areas is good as far as it goes; for example, in protecting California’s Clean Cars program, rebuking efforts by cities to evade new state housing laws and warning county prosecutors against criminally charging women in the event of stillbirths.

Hochman, although no Paxton or Fitch, is campaigning from the California version of the Republican playbook, urging supposed get-tough criminal sentencing. Yet his solutions inspire little enthusiasm, for good reason. To deal with fentanyl sales, for example, he touted a failed bill to require prosecutors to warn convicted sellers that next time, they could be charged for murder if someone using their product dies. It’s not that it’s an outrageous idea, but it’s a slight one, and not the kind of thing that should lead Californians to switch attorneys general.