Endorsement: Thurmond is the better of the two candidates for state schools chief 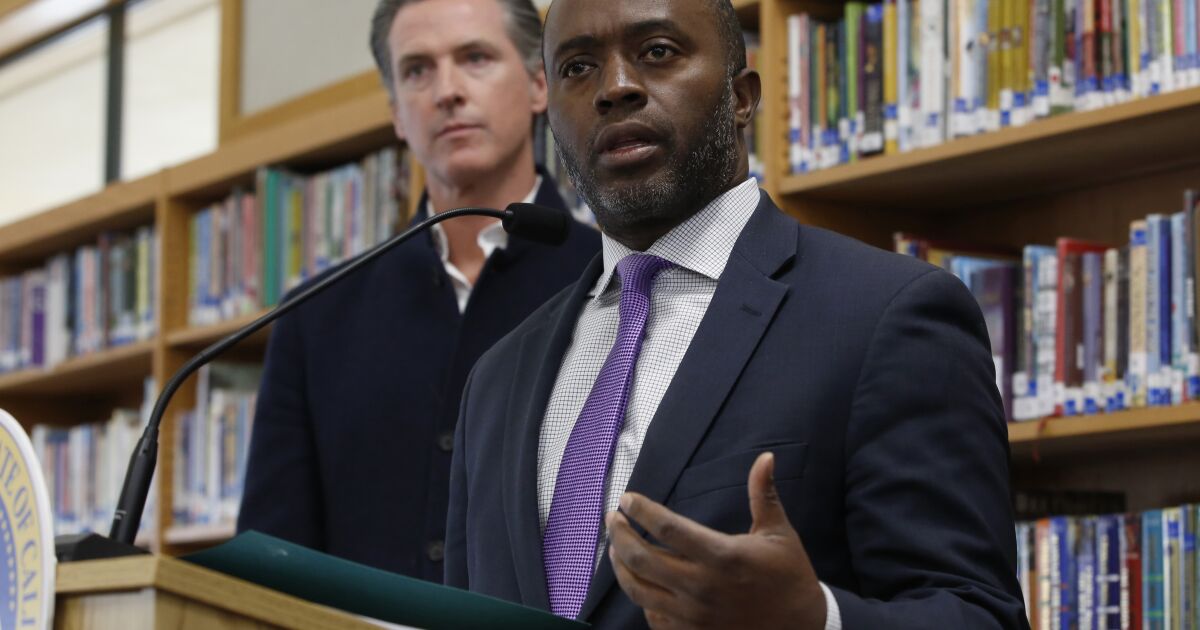 It would be a stunning upset if Tony Thurmond were to lose his reelection race for California superintendent of public instruction on Nov. 8. But it’s not an impossibility.

Even with the incumbent’s advantage, serious funding and the backing of the state’s Democratic establishment, he was unable to muster a majority in the June primary. Thurmond now faces challenger Lance Ray Christensen, vice president of education policy and government relations at the conservative think tank California Policy Center. (The state superintendent of instruction is a nonpartisan position.)

We’ve made no secret of our various disappointments in Thurmond, whom we endorsed in 2018. He has undertaken some worthwhile efforts, such as helping to secure computers for students during the pandemic and pushing for the law that will make transitional kindergarten universal — the kinds of things that call for more spending at a time when the state is flush. But on more urgent and controversial issues, he’s too often silent.

Yes, it’s true that Thurmond’s office, though elected, holds little power to change policy. But he does have ability to use his position to advocate for parents and students, which he has not done to the level we expected. Nor has he been the education leader we needed during the COVID-19 pandemic. His office has been plagued with complaints of toxic leadership and questionable hiring practices. He’s launched several task forces on topics such as literacy and access to technology, and held town hall meetings and panel discussions, but taken too little or misguided action.

Thurmond has made some good moves. He began a major initiative to improve reading instruction in primary grades. That’s the right priority; the state’s students read poorly, and fixing that could make an enormous difference in their academic success. But the feel-good ambition for every student in the public schools to reach grade-level reading by 2026 isn’t going to happen. He hasn’t set specific, attainable goals and metrics for marked improvement. This is one example of how his ideas have not been developed sufficiently to be carried out in the classroom. The next two months would be a perfect time for him to sharpen his thinking on this and other subjects and give voters a reason to vote for him rather than against Christensen.

Here’s the reality : Thurmond may have a weak record, but Christensen’s agenda is worse. He supports private-school vouchers, which would seriously harm public education, and allowing staff-led prayer in schools, such as in the locker room before games, including prayers of specific religions. That’s flat-out proselytizing; even the conservative majority on the U.S. Supreme Court might not go that far. He also supports the recent Supreme Court decision that overturned Roe vs. Wade. Reproductive rights may not be a major part of education, but the superintendent has some regulatory leeway on sex education and a soapbox to use.

Christensen is a back-to-basics thinker at a time when schools are modernizing their course offerings to be more engaging and immediately useful to students. Christensen’s positions are too out of line with the values of most voters in California to make him a candidate worthy of consideration.

Not all of Christensen’s ideas about the job are bad, however. He would appoint a high-level parent liaison for the state, whose job is to understand at the ground level how schools are and aren’t working for families.

If Thurmond retains his post in November, he should consider adopting this idea. Take the reading initiative as an example of how it could help. Thurmond’s first big meeting was with district superintendents, some of whom have pushed for the adoption of problematic reading materials or failed to provide appropriate teacher training. They’re not the ones who can tell Thurmond what’s wrong with reading instruction; many of them are part of the problem. Why not ask parents for their perspectives on why children struggle?

But at least Thurmond has a nascent reading plan. Christensen wants to give more control to local districts. If that worked, students would already be reading like champions.

Thurmond should get a chance to see his reading plan through with a second term. If he wants to be remembered as the superintendent who accomplished something great for California schools, he needs to go about his second term with more action and planning.

The state is clearly better off with Thurmond than with Christensen. But we hope that Thurmond uses a second term to develop into the superintendent of public instruction who makes an educational difference.

Three persons arrested for rash driving in the city

Doctor attacked over death of patient

27% increase in number of pharmacies in under 3 years

Three persons arrested for rash driving in the city

Doctor attacked over death of patient