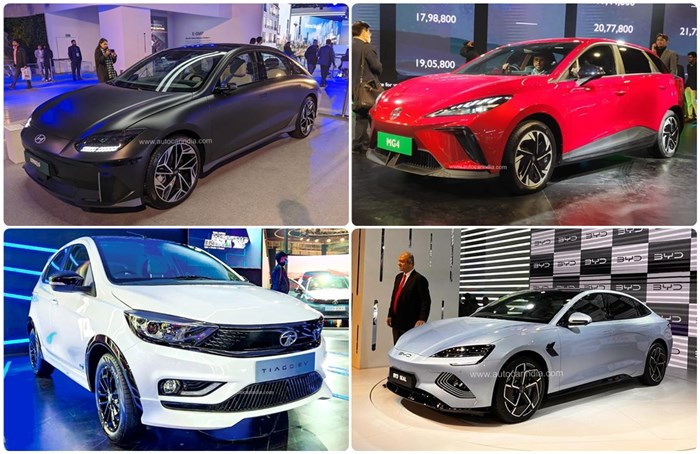 We take a look at all electric cars showcased at the Auto Expo that will come to India.

The Auto Expo 2023 might have had fewer participants when compared to the previous editions, but they came out all guns blazing with multiple model displays. The focus of this Auto Expo was clearly electric mobility with every participating brand having at least one electric car in either concept or production form. We take a look at important electric cars and SUVs that are India bound.

Chinese EV giant BYD (Build Your Dreams) entered the Indian passenger car segment recently, and sells the e6 MPV and Atto 3 SUV here. At the Auto Expo 2023, BYD unveiled the Seal premium sedan and confirmed that it will go on sale in India towards the end of 2023. The Seal EV gets its design cues from the Ocean X concept shown in 2021, and follows the brand’s “ocean aesthetics” design language. On the inside, it gets a multi-layered dashboard with a large, rotating 15.5-inch touchscreen.

The Seal gets two battery pack options – 61.1kWh and 82.5kWh. With the latter, the Seal has a range of up to 700km on the Chinese light-vehicle test cycle. Bookings for the EV sedan will commence around September 2023, and it is expected to be priced in the region of Rs 70 lakh (ex-showroom).

In addition to the Seal, BYD also launched the limited edition of the Atto 3 EV SUV finished in Forest Green paint shade for Rs 34.49 lakh (ex-showroom).

The stylish Ioniq 6 takes design cues from the Prophecy concept, and gets long curves and creases. Hyundai says that the Ioniq 6 has a drag coefficient of just 0.21Cd, which is further helped by flush door handles and cameras in place of traditional wing mirrors. On the inside, the Ioniq 6 gets a flat centre console, similar to the Ioniq 5, and a minimalist design for the dashboard.

The EV sedan gets two battery packs – the entry-level 53kWh and the larger 77kWh. A single-motor RWD set-up is standard with high variants getting a dual-motor AWD option. The Ioniq 6 with the dual-motor set-up makes 320hp and 605Nm, which is same as the Ioniq 5.

As far as WLTP-certified range goes, the Ioniq 6 can do up to 614km on a single charge.

In addition to debuting the Ioniq 6 here in India, Hyundai also launched the Ioniq 5 EV SUV.

The MG4 is an electric car based on parent company SAIC’s modular scalable platform. Globally unveiled in July 2022, the MG4 is about the same size as the ZS EV SUV and rivals the Volkswagen ID.3 in international markets. The MG4 is a sharply styled hatchback with a minimalistic yet advanced cabin. The MG4 EV is well equipped with features like 360-degree camera, ventilated front seats and ADAS tech.

The MG4 comes in two battery packs overseas – 51kWh and 64kWh. The former makes 170hp and the latter produces 203hp. MG claims the smaller battery pack can return a range of up to 350km, while the larger one has a range of 452km on the WLTP cycle. MG is evaluating the EV hatchback for sale in India.

The Tiago EV Blitz is essentially the sportier version of the standard Tiago EV that was launched here in September 2022. There aren’t a lot of details about the EV hatchback’s powertrain, but the Blitz gets cosmetic upgrades to enhance its sporting character.

Important cosmetic changes include the omission of blue accents seen on other .EV products from Tata. Instead, it gets an all-black trim under the headlamps and the closed-off grille. It also gets all-black alloys and a blue bolt motif next to the .EV badges on the front grille, front doors and tailgate.

There is still no information on the price, powertrain or chassis upgrades that the EV hatchback will get. Tata has mentioned that the Tiago EV Blitz will be launched in FY 2024.