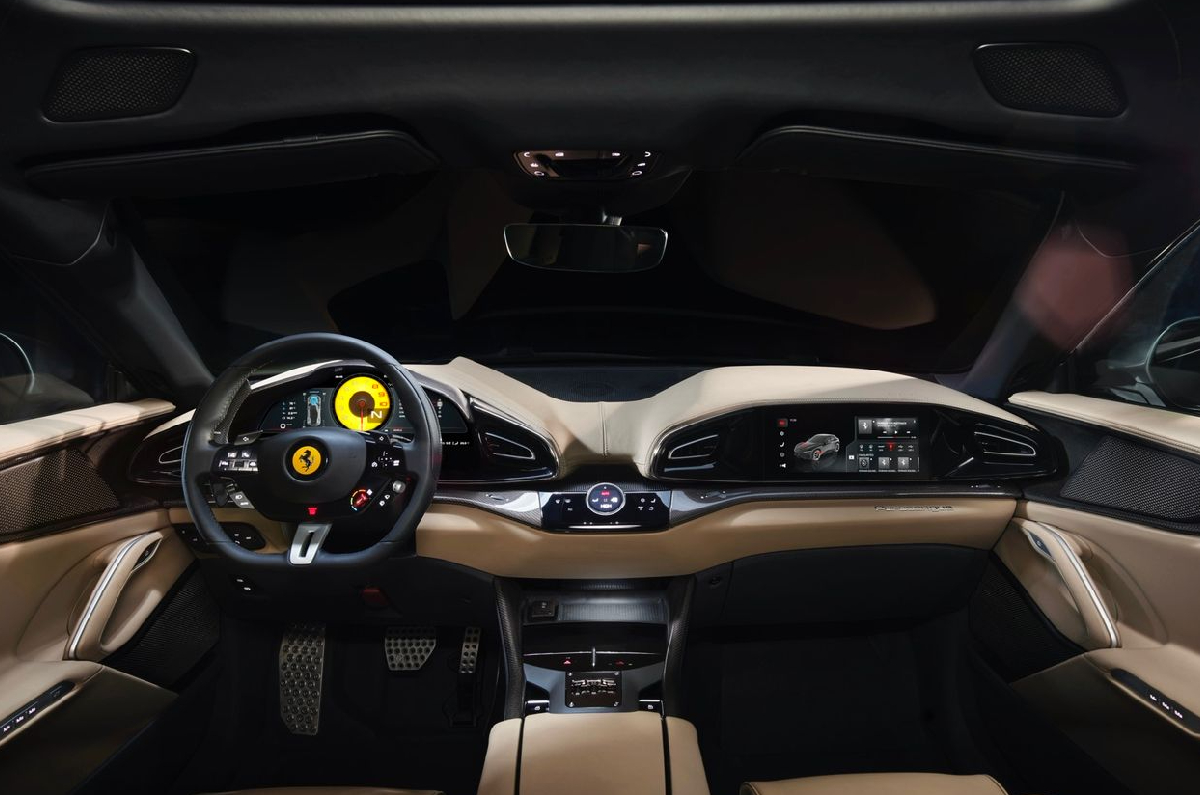 Ferrari has taken the wraps off the Purosangue, a car it describes as its first ever ‘four door, four seat model’. The Purosangue, a long awaited addition to the Ferrari line-up, will operate in the same space as models like the Lamborghini Urus and Bentley Bentayga, though the Italian marque refrains from classifying its latest an ‘SUV’. Ferrari says the Purosangue’s sportscar-like front-mid engine position and rear-mounted gearbox (enabling a 49:51 weight distribution) is one among many elements that make it very different from the current lot of high performance SUVs.

Having seen the car in the metal at Ferrari’s design HQ (Centro Stile) at Maranello, we can also tell you the Purosangue is not your average super SUV in look. Lower in its roof than an Urus, the Purosangue looks like a Ferrari sportscar on stilts. And the effect is mega. The long bonnet, shapely roofline and tight fitting tail give it an eye catching silhouette. Cladding at the wheel arches and doors cut the visual mass, and also cleverly conceal small but unsightly aero aids, of which you’ll find many on close inspection.

It’s the larger elements, shaped by the need to minimise drag and optimise air flow, that define the Purosangue’s look. Ferrari designers’ interpretation of the in-vogue split headlamp arrangment is upper LED DRLs flanked above and below by air vents, with the main headlights positioned lower down amidst large ducts. An ‘aerobridge’ at the bonnet edges, like those seen on the F12 Berlinetta, are a key part of the aero package as well.

You won’t find SUV-like angular cues or upright pillars on a Purosangue. It’s all sinuous lines and purposeful details. There is a glorious flow to the roof line and you’ll even note a slight visual connect to the SF 90 Stradale in the tail lamps. In all, the Purosangue is unlike any Ferrari before, yet is unmistakably a Ferrari in look.

And when Ferrari does back doors, it does them in style. The Purosangue’s back doors are rear hinged, and open with a welcoming gesture. The fully powered rear doors open to 73 degrees allowing the easiest access to a Ferrari’s back seats to date. The 2 individual rear seats, adjustable for position and backrest angle, put passengers in a sporty seating position though the seat squab isn’t the most generous. It’s not a deal breaker by any stretch though because the mere presence of easily accessible seats opens the Purosangue up to buyers who want a Ferrari but need seating flexibility too. Space at the back isn’t as generous as an Urus but the optional electrochemic glass roof does lend the cabin an airy vibe. A rear centre console between the seats packs in seat options, and you also have access to the 373-litre boot from the back seats.

The best seat in the house is the one for the driver. From the driver’s seat, you get a good view of the road though you won’t be towering over fellow road users; think mid-sized sedan seating position. All controls fall easy to hand with driving modes and other settings housed on the steering wheel itself. The front passenger will also feel involved in proceedings courtesy a dedicated display on the dash.

Ferrari’s unique approach to the Purosangue, Italian for thoroughbred, is also reflected in the choice of engine. While high power twin-turbo V8s are the norm in the performance SUV segment, the Purosangue will launch with a new 65-degree 6.5-litre naturally-aspirated V12 petrol engine. The engine produces 725hp at 7750rpm and 716Nm at 6250rpm. Ferrari officials say a riveting soundtrack was a must-have for the project and a V12 it had to be. A turbocharged V8 could be part of the line-up in the years to come though Ferrari has not confirmed the same.

The direct injection V12 has been tuned to deliver 80 percent of its peak torque from 2100rpm, though the characteristic crescendo like top-end complete with a manic 8250rpm redline has been maintained. Engine power is channelled to all four wheels via a 2-speed front power transmission unit, and an 8-speed rear dual clutch transmission. Shift times are said to have improved over Ferrari’s older 7-speed DCT, and downshifts have been programmed to ’emphasise the sound of the V12′.

The Purosangue tips the scales at 2033kg (dry) making it the heaviest Ferrari of all time. However, performance is at par with its low slung brethren. Headline numbers are a 0-100kph time of 3.3 seconds, 0-200kph time of 10.6 seconds and a top speed in excess of 310kph. Standard fit carbon ceramic brakes deliver the requisite eyeball popping braking performance.

Interestingly, a four door Ferrari was first envisioned in the 1980s but the project was dropped as it was deemed handling wouldn’t have been in line with other cars from the marque, a compromise Enzo Ferrari was unwilling to make. Ferrari insiders say the single most important technological innovation that made the Purosangue possible was its active suspension. In brief, 48V motor actuators at each of the wheels provide precision control of high frequency movements, maximising road grip and body control. The power and speed of the actuators make them a far superior option to a slower to respond air suspension, Ferrari says. Of note, and if particular interest to Indian buyers is ground clearance. The Purosangue offers 180mm of unladen ground clearance and a lift option will add in an additional 30mm, albeit for low speed use only.

Ferrari has tested the Purosangue in varied settings but the emphasis is on it being a sportscar first. There are no off-road modes, it rides on high performance tyres and there’s no ‘rough road package’ or special underbody protection either. Snow and light tracks are likely to be the worst conditions Purosangues will see.

Purosangue deliveries commence in Europe in the second quarter of 2023, and right hand markets like India will get the car only in the latter part of the year. Ferrari has said interest in the model is huge and has hinted at a large order bank even before the car’s official reveal. Wait times for delivery are expected to stretch well past a year though the carmaker stands firm that Purosangue production will never exceed 20 percent of total production.

Last but not least, prices. Based on pricing revealed for the European market, the Ferrari Purosangue is expected to start upwards of Rs 6 crore (estimated, ex-showroom) in India.

A Lamborghini Urus, for reference, starts at Rs 3.7 crore.

Bundling ferocious performance with never seen before practicality, the Purosangue will be the most India-friendly Ferrari. We can’t wait to drive one!