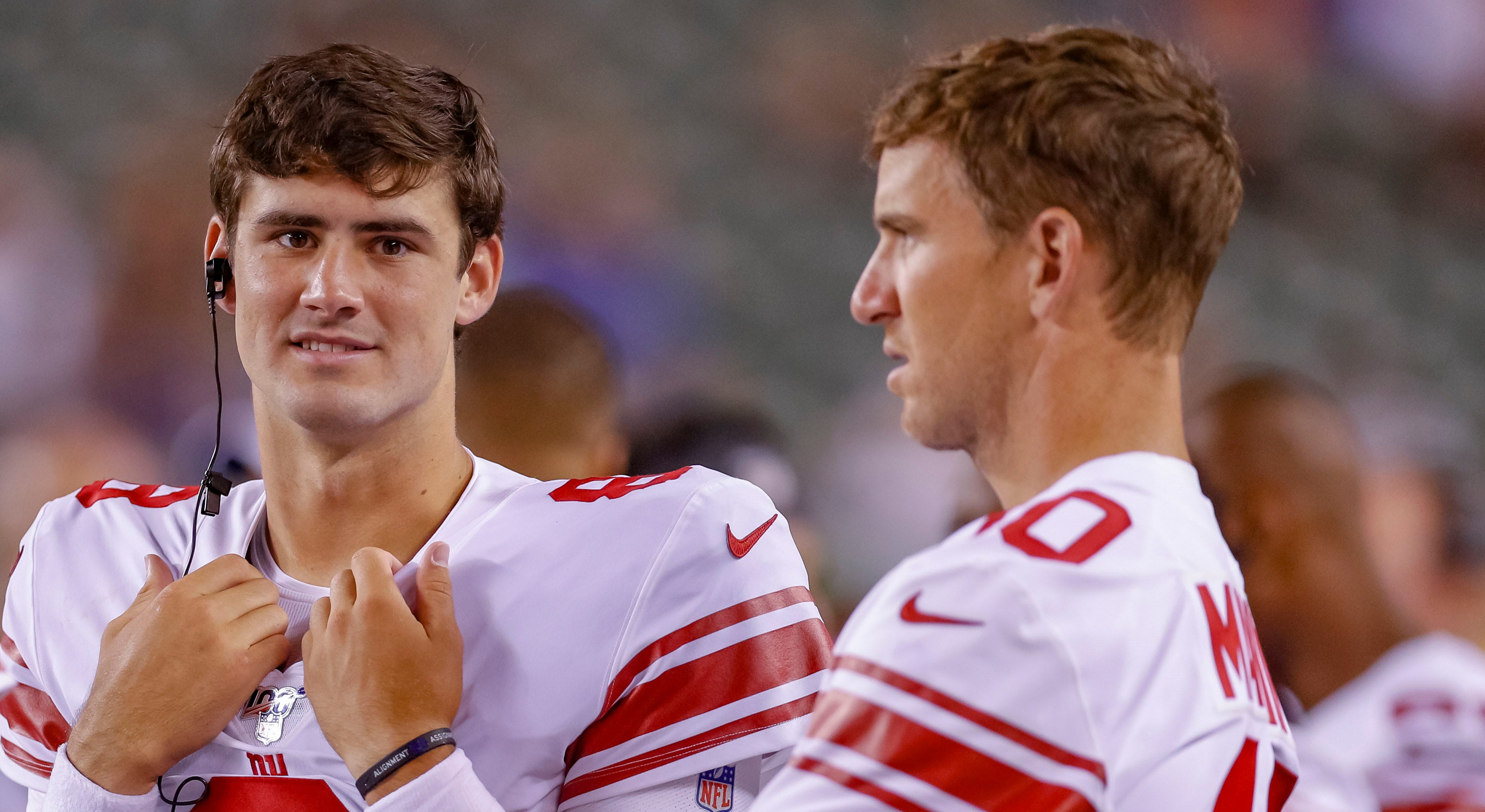 New York Giants quarterback Daniel Jones has never been to the playoffs in his previous four seasons in East Rutherford, but now that he’s about to embark on that journey Sunday in Minnesota, he’s leaning on his mentor for a little advice on how to handle the pressurized moment.

Eli Manning took Jones under his wing in 2019 when he was the No. 6 overall pick out of Duke, and eventually made the transition as he hung up his cleats for good after 16 years with the Giants, tallying two Super Bowl victories along the way.

But Manning remains a large part of the organization, and Jones knows he is just one phone call away if need be. He took Manning up on that recently.

Eli Manning, #10, and Daniel Jones, #8, of the New York Giants talk prior to the game at MetLife Stadium on December 29, 2019, in East Rutherford, New Jersey.
(Sarah Stier/Getty Images)

The last time the Giants were in a playoff game was 2016 – you may remember a specific picture on a boat prior to that blowout in Green Bay. It’s been downhill since, as the Giants couldn’t figure out a quick rebuild.

However, under GM Joe Schoen and head coach Brian Daboll, the Giants have revitalized their organization, creating a winning culture that produced a 9-7-1 record and the No. 6 seed in the NFC playoffs.

A lot of credit has to go to Jones who, in his fifth year in the NFL, has thrived under Daboll and offensive coordinator Mike Kafka’s system.

Jones has curbed his turnover habit, giving up the ball just eight times in 16 starts this season. He’s notched career-highs in QBR (60.7), passing yards (3,205), rushing yards (708), and rushing touchdowns (7), while throwing for 15 touchdowns to five interceptions.

A healthy Saquon Barkley and an aggressive Wink Martindale-run defense have brought the Giants out of obscurity and into the tier of a team you can’t take lightly on gameday.

The Vikings understand that, as they needed a franchise-long 61-yarder from kicker Greg Joseph on Christmas Eve to defeat the Giants with the game notched at 24 apiece.

Jones also understands what it means to play in Minnesota this weekend – it’s an experience he’s been waiting on for quite some time.

The entire team has.

“These games are the most meaningful games you can go play. And huge opportunities,” Jones said. “But it’s about the team. It’s about what we do as a group and how we’re remembered collectively rather than how any individual is remembered. Think we have a group of guys with that mindset.”

The Giants will head into the game with all 53 players on their roster healthy, including top cornerback Adoree’ Jackson, who has missed the last seven games with a sprained MCL he suffered while returning a punt.

Daniel Jones, #8, and Eli Manning, #10, of the New York Giants are seen during the preseason game against the Cincinnati Bengals at Paul Brown Stadium on August 22, 2019, in Cincinnati, Ohio.
(Michael Hickey/Getty Images)

The Vikings are the favorites in this one after securing the No. 3 in the conference following their NFC North victory. Kirk Cousins, Justin Jefferson and the rest of the high-octane Minnesota offense have shown their ability to come in clutch at the end of games, tying an NFL-record eight fourth-quarter comebacks for wins.

That game will kick off on Sunday at 4:30 p.m. in U.S. Bank Stadium in Minneapolis.

Scott Thompson is a sports writer for Fox News Digital.