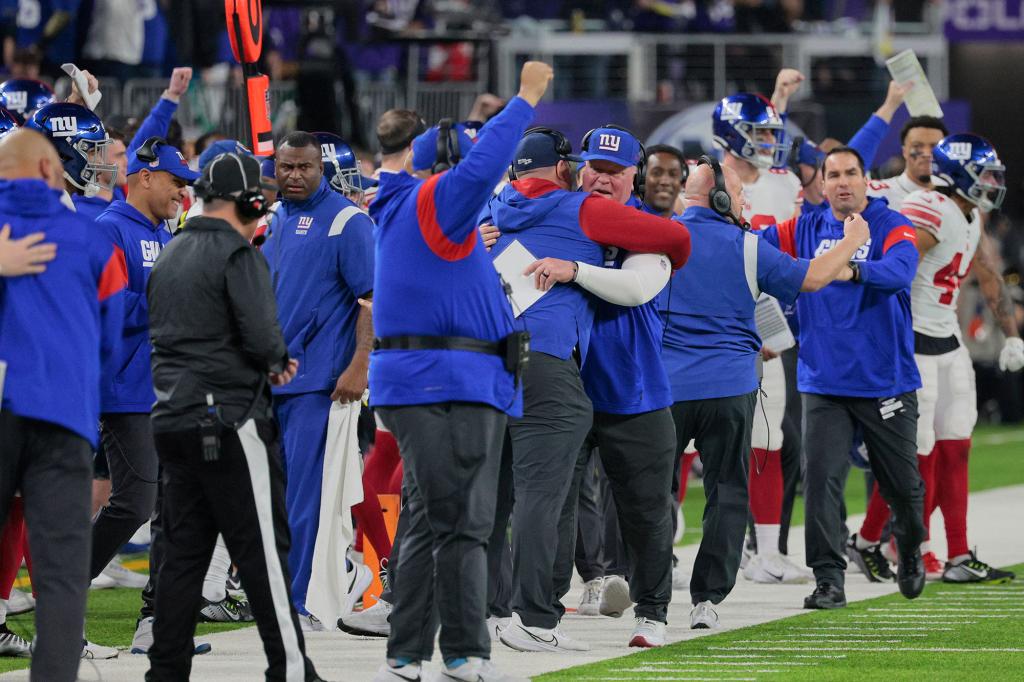 Mike Murphy, longtime Giants security man, was wearing a jacket and tie outside the visitors’ locker room, which was an event all its own. A bull-necked ex-cop once discovered by Bill Parcells at the Jersey Shore –— a Giants origin story to retire them all — Murph is the kind of guy who dresses up only for weddings and funerals, and only after checking if he needs to.

But when asked after the Giants’ 31-24 wild-card round victory over the Vikings why he felt the need to show up to U.S. Bank Stadium in more formal attire, he answered, “It’s the playoffs. It feels so good to be back.”

Murph was positively beaming after more than 30 years on the job, and he was hardly alone. A family celebration broke out around him, a fitting development because the Giants have always been a family business. It seemed that five generations of Maras had gathered outside that locker room door — there were actually 47 members of the Mara clan in attendance — along with the co-owner Steve Tisch, who looked happier than he’s looked in a long, long time.

And yet it wasn’t just unmitigated joy on their faces. The feeling of sheer relief was as plain as day too.

John Mara summed it all up perfectly with two words: “We’re back.” It’s really all that needed to be said. His Giants had become an embarrassment, stacking one season of double-digit defeats on top of another, and he was absorbing heavy body blows from all angles.

Not all of the criticism was warranted. But a good amount of it was, frankly, and that’s why Mara compared the time waiting for the Giants’ first postseason victory since Super Bowl XLVI in February 2012 to his father Wellington’s Dark Ages from 1964 through 1980, lowlighted by a fan revolt in the late ’70s.

The Giants leave a gaping hole in the market when they descend into a sustained period of irrelevance. And when they recover and show signs of advancing toward a championship run, it fills a lot of voids.

“I noticed the Empire State Building in blue,” Mara said Sunday night, “and to see the excitement around town, to see how excited our fans are right now, that’s the best part of this for me.”

Mara might not have said it, but he had to feel good for his family members too, especially for his brother Chris, the longtime personnel executive who had faced intense scrutiny over sourced charges that bloodlines were getting in the way of honest, football-only evaluations.

Normally an inconspicuous presence after games, Chris was standing in the middle of the locker room celebration wearing the same expression that John had on his face.

“I went from getting actual threats to now getting ticket requests,” Chris Mara would tell The Post. “It’s good to feel this way again. My dad’s big thing was to make sure you’re playing meaningful games in December and then hopefully make it to January. He used to say that, as a family business, this is not a sprint, it’s a marathon. You’ve got to hang in there.”

Chris Mara praised the work done by rookie general manager Joe Schoen, who was the first candidate interviewed for Dave Gettleman’s old job. Schoen was so impressive in his first meeting with team decision-makers, Chris Mara said, “that everyone who came in after him had a tough sell.”

Schoen then hired Brian Daboll, who has been lights out, and Daboll then hired some assistant coaches who have been lights out, too. By beating the Vikings and advancing into Saturday night’s divisional-round duel with the top-seeded Eagles, the Giants have summoned some comparisons to the 2007 team, which went on an improbable run that culminated in the Super Bowl upset of the 18-0 Patriots.

“But it’s a much different feel to me,” Chris Mara said, “and mostly because I think we all felt after watching Eli [Manning] in his first three years in the league that eventually he was going to take us there. And with Daniel coming in and having so many different coaches and coordinators, I felt going into this year it was going to be a feeling-out process with another new staff. They had to evaluate Daniel in camp, and that was the biggest thing. They figured out what he could do, not what he couldn’t do.”

Now Jones is playing at an elite level, making all things possible for his team, including more of those Sunday scenes in the belly of U.S. Bank Stadium.

For those of us who were around to chronicle the 2007-2011 glory days, that family gathering looked awfully familiar. You half expected to see a victorious Eli and Tom Coughlin come walking through the door.

So many faces have changed, outside of the Maras and Steve Tisch and Mike Murphy and a few others, but the goal remains the same. If the Giants win a championship next month, or next year, or whenever, people will remember this game and after-party in Minnesota as the starting point.

They will remember Sunday as the night the Giants finally became the Giants again.