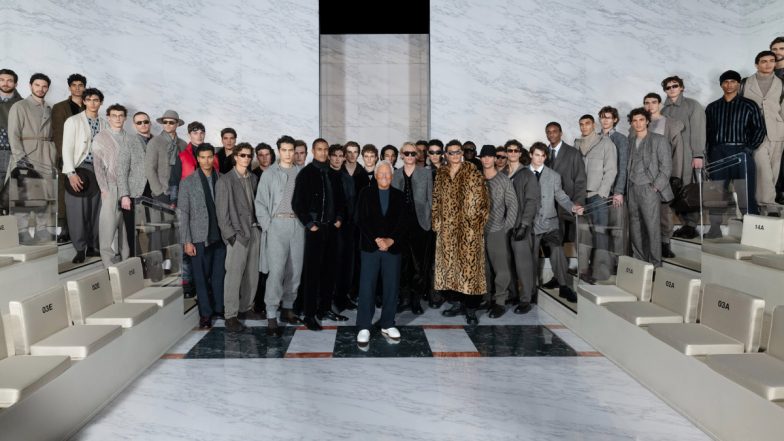 Milan Fashion Week closed four days of mostly menswear previews for next fall and winter on a note of tranquility. Italian fashion world stalwart Giorgio Armani took his admirers inside Milan’s hidden courtyards, islands of calm concealed from general view within the walls of the city’s austere neoclassical architecture. Lohri Fashion 2023: Traditional Yet Glam Outfit Ideas to Move Up Your Fashion Meter!

Indian designer Dhruv Kapoor, a relative Milan newcomer, hopes to promote an interior journey with a new collection in which he seeks to reconcile alter-egos – be they romantic, aggressive or pensive – as a way of healing. While creating similar moods, the presented designs couldn’t have been more aesthetically opposite: one a study in tailoring and muted hues, the other an explosion of color on silhouettes that mix the oversized with the petite. Gina Lollobrigida Dies At 95: Did You Know The Italian Diva Had Actes With Kabir Bedi and Had Made His Then-Girlfriend Parveen Babi Jealous?.

Kapoor has a message of radical self-acceptance in his collection, which combined floral prints promoting stillness, cartoon images of Godzilla representing aggression and lace details for romanticism. The designer, through his unisex collection dubbed “The Embracer,” advocates embracing all of our parts, even those viewed negatively. Not that he thinks the solution lies in wardrobing.

“It’s a very simple process. Look in the mirror and tell yourself, I love you.’ And see how the magic starts to shift. You just need to admire yourself just the way you are,” Kapoor said backstage, adding that he has felt a dramatic shift since adopting the practice. “I don’t know how it comes. I never dwell on the how.”

The collection includes a fitted, ripped denim dress over loose jeans. Broad-shoulder suit jackets were combined with tight trousers that flare into a bell bottom. Oversized sweatshirts were layered with cotton tunics and a sheer lace pant. Godzilla raged on the front of a button-down shirt or tight-fitting dress, while a silver pillow jacket had reptilian spikes down the back.

“Godzilla also has a very negative, monstrous thing attached to it,” Kapoor said. But that should not impede acceptance, he insisted. Crystals on knitwear, suits and jackets hold energy that Kapoor said can be activated to have a positive impact on the wearer’s life. Instructions are included with the garments. Models traversed the Tiepolo room in the 18th century Clerici Palace beneath images that included demons, walking to the beat of modems connecting mixed with classical music and hip hop. The mashup gives “us a whiff of the past and the future,” Kapoor said. “And we are birthing a new present.”

Kapoor also promotes healing for the environment. Nearly two-thirds of his collection is either upcycled, employing leftover textiles that otherwise would be discarded, or recycled. For this season, all of his suit fabrics are made from recycled plastics.

Hidden from view in Italy’s frenetic fashion and finance capital are quiet gardens ensconced in Milan’s courtyards. Giorgio Armani suggests these are places to pause and take stock before emerging for business or play, this season on soft footwear with rubber soles. Models walked slowly to a soundtrack of Italian pianist-composer Ludovico Einaudi soundtrack while wearing suits and separates that were deeply textured, projecting self-assuredness in the 88-year-old designer’s trademark soft-silhouette.

The color palette consisted of soft earthy tones set off by olive and forest green with a surge of crimson in sportswear and a final smattering of weekend dandy looks. Flannel cargo pants were paired with soft sweaters. Disciplined double-breasted suits befitted a negotiating table. Big gake furs, including one in tiger print, lightened the quiet mood. The show closed with couples dressed in shimmering black evening dresses and formal suits with silk or velvet details chattering down the runway, as if they were leaving a party.

Armani conceded that flashes of skin on other runways this season had a sensuality. But he stuck by his conviction: “You can wear anything you want, but when you are at an important table, you need to wear an important suit,” he said. His one transgression: ties that arch under the knot, as if pulled loose, and worn tucked into vests, “to give space to relax.” ‘Stiff is not good,” the designer added.