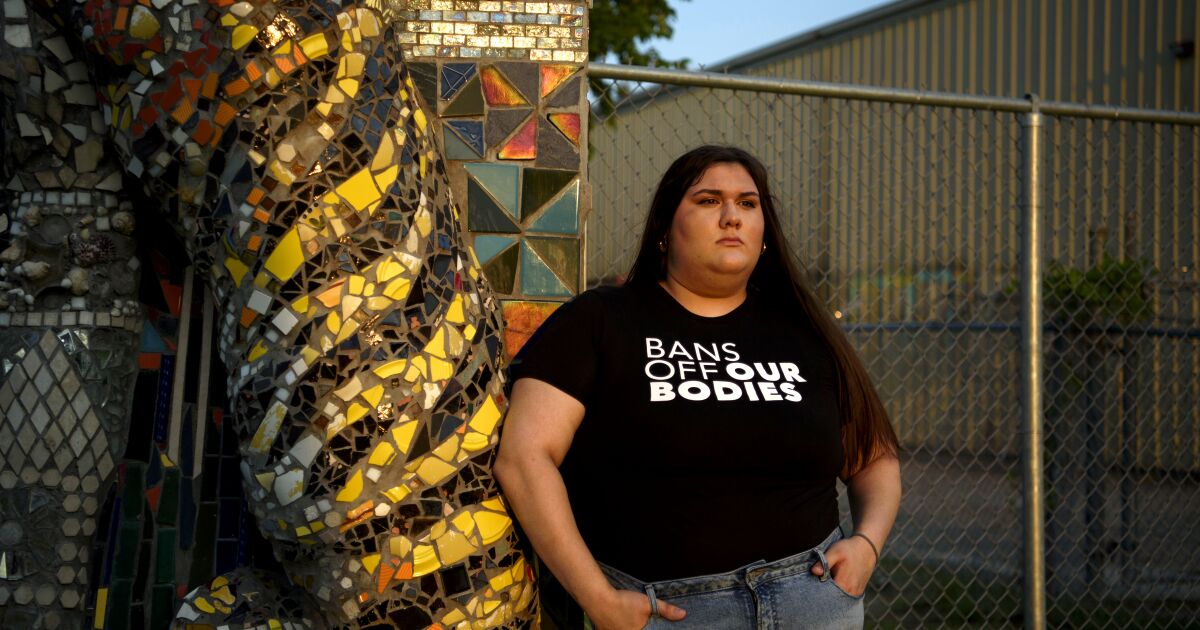 Olivia Julianna wins every time she takes on the GOP’s bullies.

The 19-year-old Texan describes herself as a “queer, plus-size, disabled Latina.” She’s the kind of person whom Trumpists love to target and troll. And she has quickly become one of the Republican Party’s most formidable foes.

The story of how this political strategist at the nonprofit Gen-Z for Change came to haunt so many MAGA Republicans should be a lesson for Democrats: Sometimes it’s best to bring some Texas swagger to the war over democracy.

Jean Guerrero is the author, most recently, of “Hatemonger: Stephen Miller, Donald Trump and the White Nationalist Agenda.”

You’ve surely heard part of the story: This summer, the teenager raised more than $2 million for abortion funds in response to body-shaming from Rep. Matt Gaetz (R-Fla.), who is under investigation on suspicion of sex trafficking. In a July speech, Gaetz described pro-choice activists as “disgusting,” saying they tend to be 5’2” and weigh 350 pounds. “Nobody wants to impregnate you if you look like a thumb,” he said.

Olivia, who uses only her first and middle names for privacy, saw an opportunity. She tweeted: “I’m actually 5’11. 6’4 in heels. I wear them so the small men like you are reminded of your place.” Gaetz took the bait. He tweeted a photo of her. She began raising money for abortion access in his name, and in less than a week, she had the $2 million. She catapulted to stardom. Her TikTok, Instagram and Twitter followings multiplied to nearly 1 million combined.

It wasn’t Olivia’s first or last time putting a bully in his place. She has done digital battle with Texas Gov. Greg Abbott, Texas Atty. Gen. Ken Paxton, Texas Lt. Gov. Dan Patrick and out-of-state politicians such as Virginia Gov. Glenn Youngkin and Sen. Marco Rubio (R-Fla.). She led a campaign that crashed an abortion-reporting website in Texas and another that sabotaged a tip line aimed at “divisive” teaching in Virginia.

She laughs in the face of fascists’ tears. “They’ve painted liberals and Democrats to be hyper-sensitive snowflakes who can’t deal with criticism,” she told me, “when the reality is these grown men in positions of power are some of the most whiny spoiled brats you will ever talk to in your entire life.”

Now she’s using her fame to support her enemies’ opponents in Texas, such as Beto O’Rourke for governor, Rochelle Garza for attorney general and Mike Collier for lieutenant governor. O’Rourke told me: “Olivia is a big reason I feel so confident that pro-choice candidates are going to win Texas this year, up and down the ballot.” He added: “Like millions of Texans, she isn’t waiting for someone to come ride to her rescue — she’s stepping up to do what she can.”

Her come-and-get-me energy is contagious, inspiring copycat fundraisers who harness the virality of hate to fight like hell to protect its victims. “There comes a time where we have to fight fire with fire,” Olivia told me. “We are no longer disagreeing with people about tax policy or about investments in certain projects. We’re quite literally disagreeing about fundamental rights and basic privacy.”

The progressive mobilization in Texas in response to abortion bans echoes a 1990s arc in California in response to the war on immigrants. Prop. 187 in 1994 sought to strip undocumented immigrants of access to public education and healthcare, fueling unprecedented voter registration among Latinos and dealing a fatal blow to Republican control over the state. Now, Texas may face a similar fate.

Olivia and the young Latinos who led protests in California have a lot in common. “It all got started because these politicians went out of their way to denigrate us and to make us feel undesirable and worthless,” said Christian Arana, vice president of policy at the Latino Community Foundation.

A surge in voter registrations among women and youths signals that Republicans may have triggered another backlash. But this time it won’t remain local. The new activists are masters of social media and reach millions from their iPhones.

Like Prop. 187, the Supreme Court decision that overturned Roe vs. Wade is a war on Latinas. Latinas earn less than all other women; many can’t afford travel for abortions. There are language barriers. The undocumented ones lack access to healthcare in many cases. Those who live within the 100-mile border zone where Border Patrol can set up checkpoints can’t travel without risking deportation.

The disproportionate impact on Latinas is one reason Olivia is such an important voice in the struggle for abortion access and other rights. And life has taught her not to be silenced.

“Anything anyone can tell me online about being overweight or being ugly, these are things I’ve heard my entire life,” she told me. “I no longer tolerate disrespect from anyone, whether it’s somebody in my family or a sitting congressman.”

She grew up in a conservative family and describes her father as a contrarian who taught her to argue: “In a way, I’ve been facing Republican opposition my entire life in my own household and was taught how to overcome that.”

Now, Olivia has co-opted the bullies’ weapons. As right-wing trolls target Latinos and other voters of color with disinformation and threats, she is energizing a diverse coalition to fight back. They’re fierce and ready to smack down the malditos. And they’re about to take back Texas.