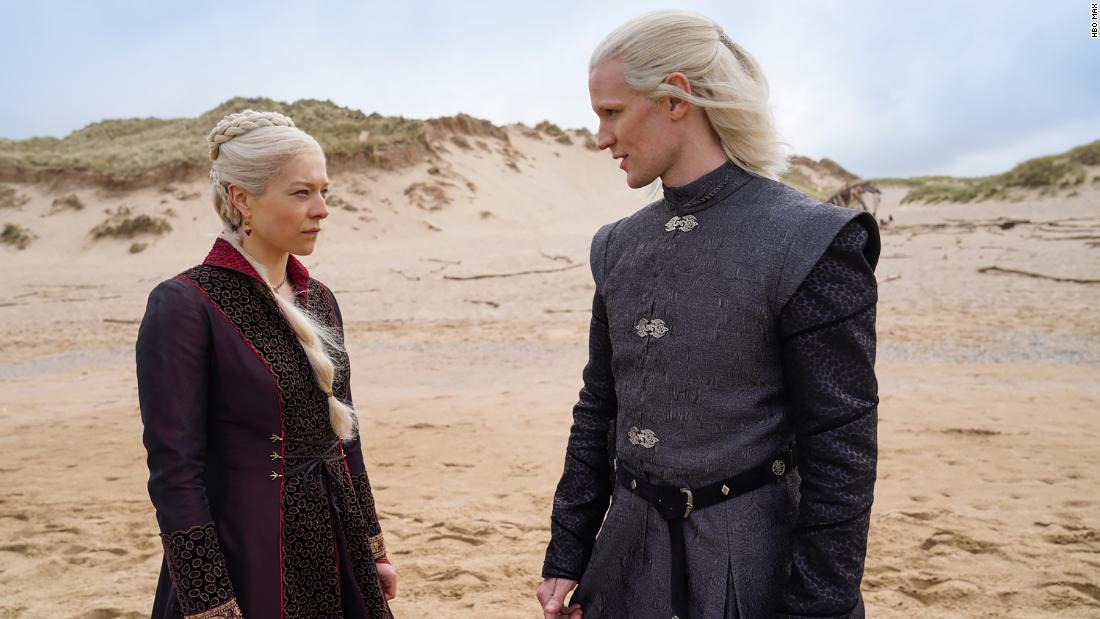 Working from author George R.R. Martin‘s prequel “Fire & Blood,” the new series has the disadvantage of being set almost two centuries before the key events in “Game of Thrones,” taking place 172 years prior to the birth of Daenerys Targaryen. That ratchets up the pressure to sink or swim — or rather, soar or sputter — strictly on its own terms.
The current occupant of the Iron Throne, King Viserys Targaryen (Paddy Considine), is somewhat feckless as monarchs go, so much so that he’s called weak by his brother Daemon (Matt Smith, playing a very different prince from his role in “The Crown”), a ruthless libertine who openly lusts for power.

Mostly, Viserys yearns for a male heir. With his wife again pregnant, his teenage daughter Princess Rhaenyra (Milly Alcock), an accomplished dragon rider, realizes that her fate hinges on whether a son is born, as does her uncle’s as another potential successor. (As an aside, all those flowing blond-white Targaryen locks should lock up a hairdressing Emmy, if nothing else.)

Practically everyone seems to be playing angles that suggest they’re a step or two ahead of Viserys, including the Hand of the King, Otto Hightower (Rhys Ifans), who wields quiet authority without raising his voice above a hushed whisper.

Martin shares created-by credit for the show with Ryan Condal, a newcomer to the “Thrones” world, with Miguel Sapochnik (who directed some of the most memorable episodes, among them “Battle of the Bastards”) also running the show.

Yet while HBO has clearly cracked open the piggy bank to ensure the look is as sumptuous as one would anticipate — and composer Ramin Djawadi’s lightly modified score goes a long way in rekindling the mood — such series are built on characters. Simply put, the occupants of this kingdom initially pale next to the likes of Tyrion, Arya, or indeed any of the Lannister or Stark kids.

Engineering a decade-long time jump halfway through the season, the story gradually becomes more compelling over the six episodes previewed, boasting moments as brutal and bloody as anything “Thrones” produced. There’s also the vague threat of war on the outer edges of the kingdom, and the periodic use of dragons as the ultimate weapon in Middle Ages-style aerial warfare.

The vigorous debate that surrounded “Game of Thrones'” final season somewhat obscured the exalted place that the series occupied until then, sustaining a practically unmatched level of excellence. Notably, it signed off in 2019 before the launch of several streaming services that have significantly upped TV’s level of ambition and investment in the fantasy realm.

Back when the original began, the character of Cersei famously said that when you play the game of thrones, “You win, or you die.” In a way, that mantra mirrored the massive bet, and huge rewards, made and reaped by the show itself.

“House of the Dragon” tries playing a similar game, but 11 years after the first series made its debut, the TV world has changed. And at its best, both this series and HBO will likely have to settle for a smaller, more qualified, less-decisive victory.

Riverfront project to go ahead after NGT quashes plea

Lucknow hasn’t had ‘good air’ for over a month

Riverfront project to go ahead after NGT quashes plea