In Defense of Russell Wilson And All ‘Square’ Black Men 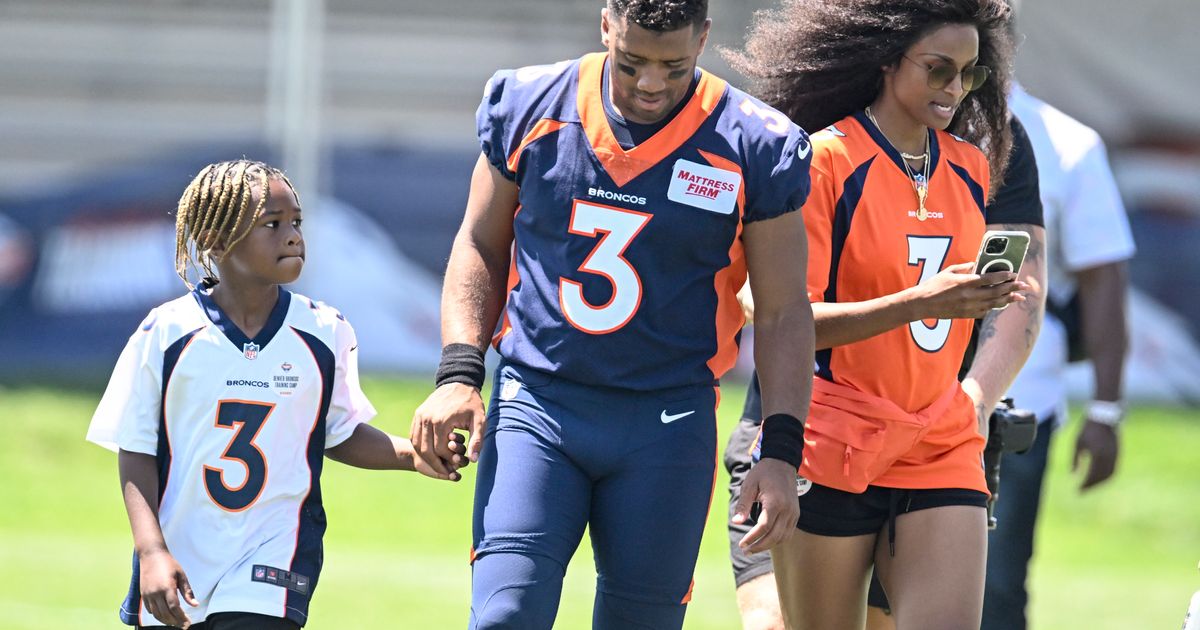 Former NFL linebacker Channing Crowder is right when he says that Denver Broncos quarterback Russell Wilson is a square.

Wilson loves his wife, the bible and his children. He’s one of the best players in the NFL, listens to smooth R&B and was once married to a woman who made this face when he was drafted.

He also recently got out of his truck wearing his own NFL jersey on a casual day.

So, yes, he is absolutely a square, at least in the sense of being a person who’s not “cool” or “in the know.” Wilson and “the know” are not friends; even if he had help from a GPS I don’t think Wilson could find “the know.” (Crowder also called Wilson a “lame,” which carries much the same meaning but has the bonus of also being an ableist insult.)

But here’s the thing: Wilson doesn’t care. So, why does it bother Crowder so much?

Crowder, who is the host of “The Pivot Podcast,” doubled down on his feelings about Wilson on the Aug. 2 episode where he proclaimed his distaste for the 33-year-old’s music choices and his hair routine. Crowder along with podcast co-hosts Fred Taylor and Ryan Clark were in conversation with Broncos cornerback Patrick Surtain II and his father, former NFL cornerback Patrick Surtain Sr. when the topic came around to the newly acquired Broncos quarterback, Wilson.

“I don’t wanna be soothing,” Crowder said after learning that Wilson prefers to listen to R&B music in the locker room before games. “I’m about to go fight a big motherfucker, trying to hit me in the head.”

This is the second time Crowder has mentioned his feelings toward Wilson. In April, Crowder called Wilson a “square”. When Crowder was asked if he wanted to take those comments back on the most recent episode of the podcast, he said he had no interest in backpedaling.

“No, I’m not taking it back,” he said. “It’s an opinion. I know guys I wanna hang with. I don’t wanna hang with Russ because he put mousse in his hair, he slick it sideways, he ain’t my type of dude.”

Crowder’s not wrong, he’s just old; not in age but in thinking. For years, Black masculinity has been judged on its proximity to violence. Not actual violence but the propensity to engage should the situation call for it. The old definition of Black masculinity that Crowder is espousing doesn’t allow for R&B before football games or different hair textures; it doesn’t allow for mousse-level styling. What Crowder is doing, whether he realizes it or not, is pushing an archaic narrative and cultural disdain about Black maleness and the *faux gasp* proximity to both femininity and whiteness.

That’s always been the rub for Black men; too far one way and you’re a menace, too far the other way and you have lost your Black card. The tightrope is an impossible balancing act, which if not careful can lead to an inauthentic life where that person may end up disassociating from themselves. That duality of trying to be both socially accepted and culturally connected is a monster. One that Crowder should understand as former NBA player Michael Beasley just talked about this issue on a recent episode of “The Pivot Podcast.”

During Beasley’s appearance on the podcast, he noted that he had trouble dealing with the success that basketball brought him having grown up in a difficult neighborhood. He noted that there wasn’t anyone to show him how to handle himself in professional settings. He explained that oftentimes the people he interacted with loved him for what happened on the court but had little use for him off of it. Beasley also spoke about the unease of wanting to play a sport without knowing how to deal with all attention and criticism that came his way when he stepped out of his uniform.

“I’ve never gotten a chance to play basketball,” he said before adding, “I’m not scared to cry in front of grown men because if you call me ‘soft’ I will beat the shit out of you.”

I could relate and so could Crowder because what Beasley presented was a familiar form of Black masculinity. What Wilson is giving is not, but there is no loss of legitimacy in his struggle or success.

What’s required is a broader definition of masculinity that allows for Black men to be “soft,” nerdy or vulnerable. While Crowder didn’t make this declaration, he’s subscribed to it. There’s this trite sentiment and belief that Black men can only be one-dimensional hood adjacent figures. Even then-Illinois Senate candidate Barack Obama addressed this sentiment in his 2004 Democratic National Convention speech.

“Go into any inner city neighborhood, and folks will tell you that government alone can’t teach kids to learn,” Obama said at the time. “They know that parents have to parent, that children can’t achieve unless we raise their expectations and turn off the television sets and eradicate the slander that says a Black youth with a book is acting white.”

It was the realest words he’s ever spoken.

Because there is a belief among many men in the Black community that if you don’t share the mythical hood experience, or if you can’t relate to the universal struggle of being Black in America that you are somehow disconnected from the Black experience. Never forget that during the Black Lives Matter movement, Wilson spoke out against the killings of George Floyd, Ahmaud Arbery and Breonna Taylor.

“When you think about the idea of Black Lives Matter, they do matter, and the reality is that me, as a Black person, people are getting murdered on the street, people are getting shot down and the understanding that it’s not like that for every other race. It’s like that in particular for the Black community,” Wilson added.

Wilson is fully aware of his Blackness and lives his life differently than those he shares a locker room with. The funny thing is that it’s easy to be Crowder; it’s easy to be a Black guy’s guy. Whatever that is. It’s easy to listen to rap music like the rest of your teammates, it’s harder to be Wilson. In a room full of people listening to the same song, he’s on a completely different station.

In the Tyler Perry movie of Wilson’s life, he is the character that saves the woman from her horrible Future. See what I did there? In the “Fresh Prince of Bel Air,” he’s Carlton. He’s Urkel. Russell Wilson is a square.

And he’s also a standup guy, which is difficult to embrace when society tends to be enamored by the strength of the bully. He’s a family man who reportedly told his R&B wife not to worry about child support from her rapper ex-boyfriend because we’re good over here. He’s a religious man who often posts Bible verses on his social media. And he uses hair products to keep his waves on shine. The square is a star quarterback and one of the highest-paid football players in the NFL.

What Crowder misses is that his football life has afforded him a financial luxury that many won’t have. If Crowder grew up poor, the work that he put in now ensures that his kids won’t have to. Crowder’s children likely won’t have any hood tales or inspiring stories about the struggle because of the work that Crowder put in. And isn’t that the point? Crowder’s efforts have allowed him to leave behind a legacy, which means that his children aren’t “in the know” because they are too busy living a fully actualized life that isn’t influenced by what the crowd is doing, nor do they care.