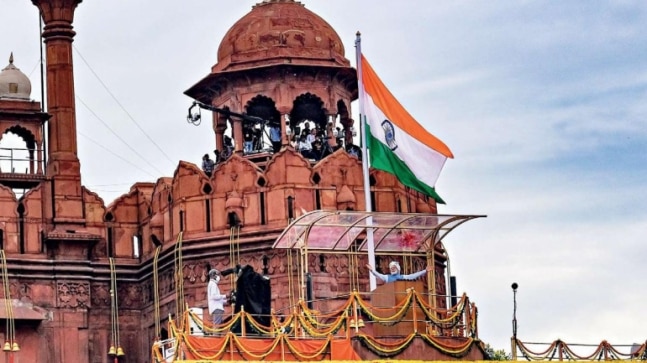 Independence. The etymology of the word is telling. It is derived from the medieval French word ‘dependre’, which means ‘hanging from’, with the Latin ‘in’ prefix standing for ‘not’. The whole word thus came to mean “not hanging from”. It is apt to describe how India broke free of the 200-year-old British colonial yoke, which had pushed the country towards an extreme state of dependence and subjugation.

Independence. The etymology of the word is telling. It is derived from the medieval French word ‘dependre’, which means ‘hanging from’, with the Latin ‘in’ prefix standing for ‘not’. The whole word thus came to mean “not hanging from”. It is apt to describe how India broke free of the 200-year-old British colonial yoke, which had pushed the country towards an extreme state of dependence and subjugation.

Nehru delivers the historic speech in Parliament on the eve of August 15, 1947, at midnight; (Photo: Getty Images)

When the East India Company gained dominance over the subcontinent around 1750, India’s economy accounted for 24.5 per cent of the world’s manufacturing output and United Kingdom’s only 1.9 per cent. In another century and a half, the British economy, on the back of exploiting India’s vast resources, came to account for 18.5 per cent of the world’s share and India’s was reduced to 1.7 per cent. So, with apologies to Jawaharlal Nehru, at the stroke of the midnight hour on August 15, 1947, when the world slept, India awoke not just to life and freedom but as one of the poorest countries in the world. Having missed the industrial revolution, agriculture remained the country’s main vocation, and the focus of the country’s leaders for the first few decades remained lifting people out of the morass of hunger, disease and deprivation.

The Constitution of India, which was adopted two years later, in its Preamble, laid down four guiding principles that the new Sovereign Democratic Republic resolved to secure for the nation’s citizenry. Justice, social, economic and political; Liberty of thought, expression, belief, faith and worship; Equality of status and opportunity; and Fraternity, by assuring the dignity of the individual and the unity and integrity of the nation. As India completes 75 years of Independence, these can serve as good barometers to evaluate what the nation has achieved.

India is still a vibrant democracy, having held 17 general elections. But it also needs reform, to curb defections, and for simultaneous general and state elections

Let’s take democracy. India has had 17 general elections, with just one aberration, when the then prime minister Indira Gandhi declared an Emergency and postponed the election that was due in March 1976. She paid a heavy price for that dark misadventure as her party lost the Lok Sabha election held in March 1977 to usher in India’s first non-Congress government at the Centre. There have been 352 assembly elections and several hundred polls for local bodies too. For the most part, the credibility and independence of the Election Commission of India have come in for appreciation. India is now not only the world’s largest democracy but also perhaps its most vibrant. But it is also in urgent need of reform, particularly provisions that can make defections from political parties more difficult, ensuring common electoral rolls for assembly and local body polls and preferably holding simultaneous elections for both the Lok Sabha and assemblies to improve efficiency in governance and curtail campaign expenses.

When it came to economic freedom after Independence, however, the state’s chariness proved to be a disadvantage. While Nehru, as India’s first prime minister, was widely acknowledged as a visionary and an institution-builder, his socialist underpinnings saw him rely mainly on government resources to fuel economic growth. He didn’t trust the private sector and set up giant public sector enterprises to build what he called the temples of modern India. The emphasis on self-reliance saw the emergence of tariff barriers to protect ‘infant’ industries. With the scars of colonialism still fresh, deep distrust of multinational corporations was a default setting. Nehru’s naivete was in evidence in 1962 when his faith in China and lack of defence preparedness saw India experience a humiliating defeat at the Communist country’s hands.

His daughter Indira Gandhi, when she became prime minister in 1966, chose to take socialism to even greater hei­ghts by nationalising banks and restricting private participa­tion in core sectors. She would earn plaudits for ushering in the Green Revolution, which gave India self-sufficiency in foodgrains and also for scoring a decisive victory against Pakistan in the 1971 war, in addition to conducting India’s first nuclear test in 1974. But her inability to handle JP’s Sampoorna Kranti and descent into dictatorship stripped her of all sheen, despite the many schemes for the welfare of the poor during her tenure, including the catchy ‘Garibi Hatao’ slogan. It was Rajiv Gandhi, who, after becoming prime minister following his mother’s assassination in 1984, brought in fresh thinking and a modern outlook to governance.

Yet it would be Prime Minister Narasimha Rao’s coalition government and his finance minister Dr Manmohan Singh who would usher in the economic reforms of 1991. Putting an end to Licence Raj, they unleashed the animal spirits of private entrepreneurs. India’s GDP growth has gone up tenfold since and now totals $3 trillion. Per capita income has shot up to Rs 1.28 lakh, the stock exchange has fetched the middle class record returns and the boom in the IT sector continues. A.B. Vajpayee as prime minister would continue the reform process by opening the telecom sector to private players and usher in a revolution whose impact persists.

However, it was during Manmohan Singh’s first term as prime minister that the economy truly boomed and allowed the government to invest heavily in welfare measures, including launching the massive Mahatma Gandhi National Rural Employment Guarantee scheme. The result was the largest decline in poverty in decades, with over 250 million Indians being lifted out of the condition during his 10-year reign. When Narendra Modi took over as the prime minister in 2014, he continued this welfarism with a renewed zeal, and at a scorching pace, launching new schemes for the poor, to build toilets, provide tap water to every household, build housing for the needy and subsidise LPG cylinders for cooking. Simultaneously, the prime minister has taken steps to reform the financial sector, with measures such as the Goods and Services Tax and the Insolvency and Bankruptcy Code to address the twin balance-sheet crisis. His tenure has also seen a major push towards privatisation, with Air India’s sale to Tatas becoming a symbol of that endeavour.

Indeed, India has come far in its development ambiti­ons in these 75 years. For one, we are totally self-sufficient in foodgrains, though lagging in pulses and edible oil production, necessitating import. Most Indians finally have bare necessities such as water, toilets, electricity and road connectivity. Poverty has reduced substantially and life expectancy has gone up to 72 years. Yet there is a long way to go too. Especially with regard to freedom of expression. If a mere tweet can land you in jail, it speaks volumes about just how insecure and intolerant ruling dispensations have become. The state has over the years, under the excuse of protecting national security interests, strengthened its repressive powers and unabashedly abused them. This, when it is incumbent on the Centre and states not to trample upon freedoms enshrined in the Constitution.

In his Independence Day address this year, PM Modi spelled out the ‘Paanch Prans’ or five goals to achieve in the next 25 years. Foremost among them was to be a ‘Vikasit Bharat’ or developed country by the time India turns 100 in 2047. To attain that goal faster, governments must learn from the mistakes of the past, especially of not harnessing fully the potential and genius of Indian entrepreneurship. Policymakers must take every step to ensure that the private sector has a level playing field and is spared unnecessary regulations and arbitrary taxation. We must not fall back into the trap of protecting domestic industry in the name of Swadeshi. That will breed inefficiency and render it uncompetitive. Public sector enterprises should be encouraged only in areas where they provide the optimum use of resources: that should be their litmus test. India must make every effort to become globally competitive and to tap into the value chains to boost exports. To become a Vikasit Bharat, experts estimate that the per capita income needs to grow at an average of 12 per cent for the next 25 years. That will enable India to catch up with advanced countries. It’s a tall task, but not impossible. We must renew our tryst with destiny without further delay.

The taming of Covid-19

How to ruin India's best city