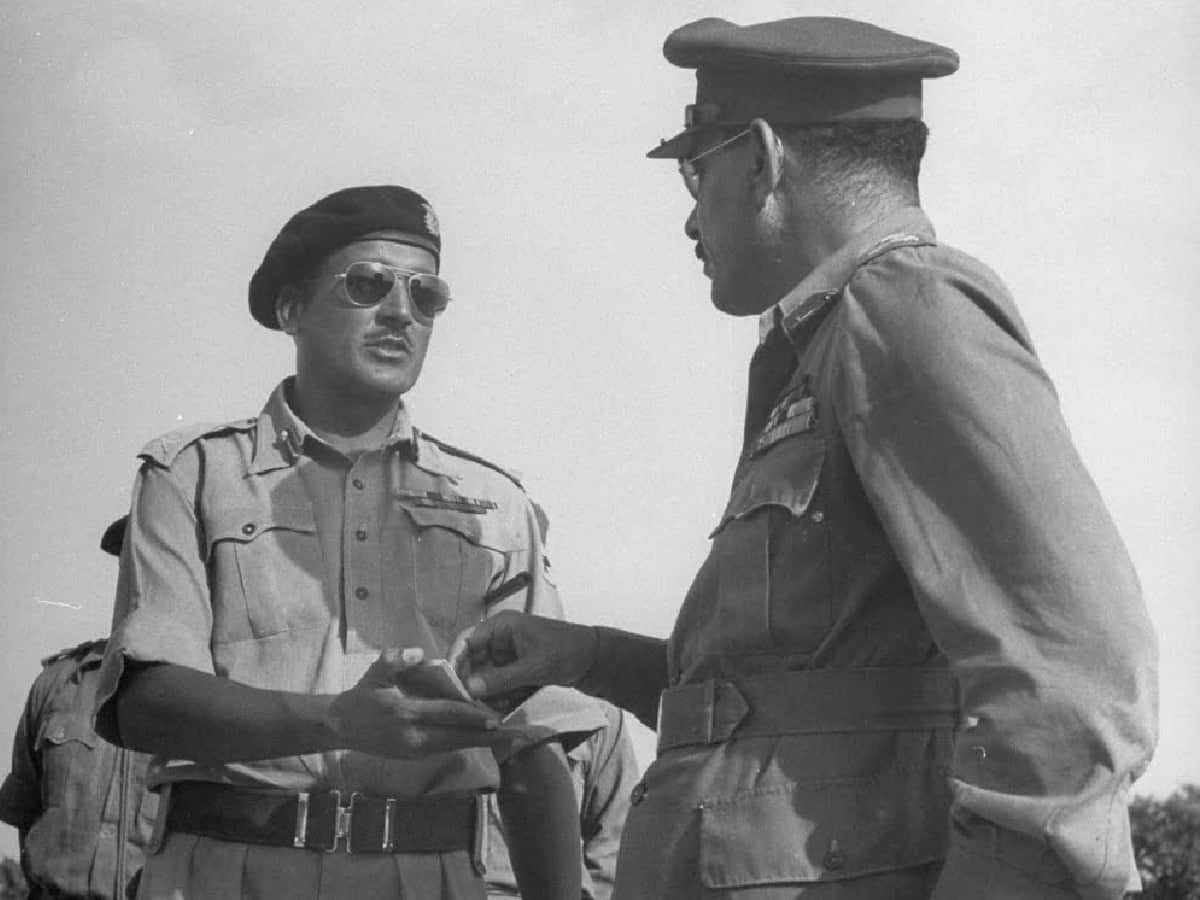 In 1947, when the British left and India became Independent, the princely states had the choice/option to either join India or Pakistan or remain independent. Being one state not under the British rule, Hyderabad opposed the idea of a merger with India in 1947. Home Minister Sardar Patel requested Osman Ali Khan Asaf Jah VII, the last Nizam of the princely, to join India, but he refused. Instead, he declared Hyderabad as an independent nation (Azad Hyderabad) on August 15, 1947. Lord Mountbatten proposed the Heads of Agreement deal in June 1948, which gave Hyderabad the status of an autonomous dominion nation under India. India was ready to sign the deal and did so but the Nizam refused on the grounds that he wanted complete independence or the status of a dominion under the British Commonwealth of Nations.

Initially targeting zamindars and deshmukhs, the Communists soon launched a full-scale revolution against the Nizam. Beginning in mid-1946, the Razakar-Communist battle became increasingly violent, with both sides using cruel tactics. Fear of a Communist state and accession Hyderabad signed a ceasefire agreement with the dominion of India in November 1947, preserving all prior agreements save for the stationing of Indian soldiers in the state. Hyderabad broke the agreement in all areas: foreign affairs, defence, and communications, interfering with border and railway trade, and secretly lending Pakistan 15 million pounds. The authorities of the new Dominion of India were fearful of India becoming Balkanized if Hyderabad remained independent. According to A G Noorani, Indian Prime Minister Jawahar Lal Nehru was concerned with putting an end to what he referred to as Hyderabad’s “secessionist effort,” but he preferred negotiations and viewed military action as the last choice. Home Minister Sardar Patel, on the other hand, took a firm position and had no tolerance for negotiations, ordering the seizure and annexation of Hyderabad. India invaded the state on September 13, 1948, following a crushing economic blockade, fearful of the establishment of a Communist state in Hyderabad and the rise of violent Razakars. The Nizam then signed an instrument of accession, thereby joining India.

The secret arms collection of Nizam from Pakistan, unabated atrocities of Razakars and the rising sway of the Communists over thousands of villages hastened the Union Government for a forcible accession of the Hyderabad State. In particular, the Government of India was alarmed at the fast growing strength of the Communist Party in Telangana region. In the summer of 1948, Indian officials, especially Patel, signaled an armed action against Hyderabad. Britain encouraged India to resolve the issue without the use of force, but refused Nizam’s requests for help.

The Nizam also made unsuccessful attempts to seek intervention of the United Nations. Nizam by a cablegram dated 21 August 1948 approached the United Nation’s Security Council under Article 35 (2) “that a grave dispute had arisen between Hyderabad and India which unless settled in accordance with the international law and justice, was likely to endanger the maintenance of International peace and security and bound to create Communal war through Indian subcontinent.” Jose Arce, the Argentinean delegate to the U.N. Security Council took strong objection at the Indian Government’s act of Army action on Hyderabad State. He described that, “The March of the Indian troops on the Capital of Hyderabad reminds me of the March of Italian troops towards the Abyssinian Capital.” The idea of Hyderabad arming itself aided by Pakistan did not go down well with the Indian Government. Sardar Patel described the idea of an independent Hyderabad as “an ulcer in the heart of India which needed to be removed surgically.” India decided to annex Hyderabad. This operation was named Operation Polo and at times it was also referred to as Operation Caterpillar. Though it was only a five-day war that began on September 13 and lasted till September 18, it was significant as the Indian Army took over a powerful state and Hyderabad was ceded to India.

A state of Emergency was declared when 36,000 Indian troops entered Hyderabad because the government was apprehensive about how the rest of India would react. It is estimated that 32 were killed and 97 injured on the Indian side and 490 killed and 122 wounded from Hyderabad.

The Commander-in-Chief of Armed Forces, General Roy Boucher opposed the military action against Hyderabad due to preoccupation of army in Kashmir.  However, the troops were commanded by Major General J N Choudhary. It was a two pronged attack, the main force moving along the Sholapur-Hyderabad road covering a distance of 186 miles, while another division commanded by Major General Rudra marched along the Vijayawada-Hyderabad Road. On 9th of September 1948, the Nehru’s government took the decision to resort to Police Action to remove “the cancer of Hyderabad in the belly of India.”

The Indian Army under the overall supervision of Lt. General Rajendra Singh, General Officer Commanding-in-Chief, Southern Command entered into Hyderabad on the morning of 13th September, 1948. Though they gave a little resistance during the first two days the Razakars and Nizam’s forces fled from the field. On 17th September, 1948 the Nizam’s forces under the command of Syed Ahmed El-Edroos  surrendered to the government of India. The Nizam accepted his defeat and Hyderabad became a part of Indian Union.

After the Police Action the Nizam informed the UN Secretary-General by cablegram dated 22 September 1948, that he had withdrawn the complaint and that the delegation to the Security Council, which had been sent at the instance of his former government, had ceased to have any authority to represent him or his State. With the surrender of Nizam and Hyderabad state the last and the biggest princely State of India had become an integral part of the Indian Union.

The military action by Government of India against the Nizam’s State during 13-17 September 1948 was an important historical landmark. It integrated the Hyderabad State into the Indian Union. This event has been subjected to conflicting interpretations by different scholars. While one set of scholars argue that it was emancipation, others maintain that it was a tragedy and destruction. Recently several civil society forums and political organizations in Telangana have been propagating their ideas to suit their particular ideological/political standpoint. An examination of the arguments indicates that they were not based on authentic historical sources and recorded evidences. The Hindutva advocates from a religious/communal point of view maintained that 17 September 1948, heralded “liberation” for Hindus from Muslim tyranny, while the proponents of minority communal perspective described it as a “tragedy”. The interpretation offered by the nationalist and leftist groups vacillates between emancipation and integration. However, the available historical evidence contradicts the communal interpretation offered by a set of scholars and writers. The religious dimension has been added to the event because the ruler happened to be the Muslim and the ruled were Hindus. While it is true that Nizam was Muslim by faith, the Hyderabad State was not a theocratic state. It was certainly an autocratic regime. Hence, it cannot be understood that the conflict between the rulers and the ruled was based on exclusively religious/communal considerations. Moreover, during the Nizam’s rule the “Hindu” and non-Muslim landed gentry and nobles have played an important role in the administration. The thesis of Hyderabad liberation based on religious considerations is not supported by the historical evidence.

The emancipation (Vimochana) concept propounded by the Hindutva ideologues miss out this important dimension and emphasizes on the monolithic and undifferentiated communities. Moreover, the recently made available secret government reports, papers etc., reveals the fact that the military action against the Hyderabad state was aimed to suppress both the communist uprising and Razakars; it was mainly targeted against the peasants’ armed struggle. According one estimate the number of Communist revolutionaries who were killed by the Indian military between the years 1948 and 1951, far exceed the number killed by the Nizam’s police/army and Razakars forces between July 1946 and September 1948. Thus, the military action did not lead to real emancipation of the people of Telangana, as it protected the interests of the landed gentry. The gains of the peasant armed struggle were not allowed to be enjoyed by the landless poor peasants. The brutality and the ruthlessness displayed by the military forces and the “Briggs Plan” of mass encounters led to massacre of thousands of people and great human tragedy. Another adverse consequence of the military action was the massacre of thousands of Muslims by Hindu communalists. According to Pandit Sunderlal Committee Report between 27 to 40 thousand Muslims were killed by the Hindu fanatic elements, mainly in the Kannada and Marathwada regions of the erstwhile Hyderabad State. In the Telangana region, Nalgonda, Medak, and Warangal districts also witnessed communal violence. In a secret report in November, 1948 sent to Government of India General Chaudhary mentioned, “Immediately after the military occupation started, a large majority of Hindus in all districts of Hyderabad, thought that Hindu Raj had come into being.… As a result of this retaliatory action by Hindus, some Muslims in certain districts suffered. The districts particularly affected were Bidar, Osmanabad, Gulbarga, Nalgonda and Warangal. Though accurate figures cannot be obtained yet of what the casualties were, it is estimated that about 2,000 Muslims may have been massacred.”

A confidential intelligence report of October 1948 noted, “Muslims who did not have much to do with the Razakar organization have also been greatly victimized.… In Secunderabad several Muslim houses and shops were looted both day and night for about ten days from 18-9-48, with Indian troops not effectively intervening to stop the lawlessness. Both in Hyderabad City and the mofussil it would appear that many sections of the irresponsible Hindu public looted and oppressed Muslims indiscriminately.”

Regarding the deaths of Muslims during and after the police action, there are conflicting views. Some estimated in lakhs, while others in thousands. However, “the lowest estimates, even those offered privately by apologists of the military government, came to at least ten times the number of murders with which previously the Razakars were officially accused”.

Given the multifaceted dimensions of the Police Action against the Nizam’s state, it is reasonable to assume that any interpretation based on narrow and sectarian considerations without proper historical evidence is unwarranted. In the context of the rise of Hindutva ideology it is particularly necessary to interpret the recent past in an objective and holistic perspective. An unbiased understanding of the past history and cultural legacy of Telangana is the necessity of the hour. Especially in the light of the flourishing of cosmopolitan and mixed culture in the Telangana region since the times of the Bahamanis, Qutb Shahis and Asaf Jahis it is imperative to maintain communal harmony and religious co-existence. The implications of the event on 17 September, 1948 need to be dispassionately discussed and interpreted. Any interpretations based on religious and communal perspective, without authentic evidence has the danger of polarizing the Telangana society and destroy its composite cultural legacy.

Adapa Satyanarayana is a retired Professor of History, Osmania University. He obtained D.Phil. Degree in South Asian History from Heidelberg University, Germany. He served Osmania University for about 30 years. Adapa has published more than 60 research articles and 10 books.