Kate Middleton vs Meghan Markle Over Princess Charlotte’s Bridesmaid Dress: Royal Tailor Speaks Up About Disagreement Between Princess of Wales and Duchess of Sussex 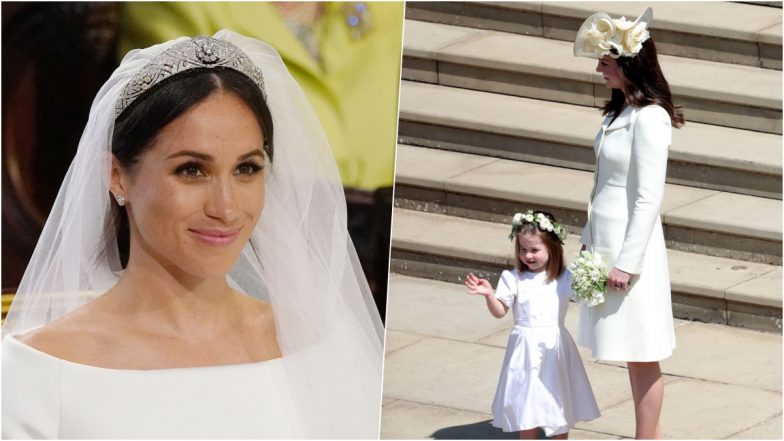 Washington, January 13: After the name of the tailor who made the much-discussed alterations to Meghan Markle’s bridesmaids’ dresses prior to her wedding was recently revealed, he has now opened up about the entire scenario. According to People magazine, an American weekly magazine, in an interview with the Daily Mail, a UK-based tabloid newspaper, Ajay Mirpuri, who Prince Harry named in his new memoir ‘Spare’, has shared his insight.

Ajay acknowledged that he and his team did work quickly before the wedding to refit all six dresses for the young bridesmaids, including Princess Charlotte. However, he clarified that he didn’t witness any disagreement between Kate Middleton and Meghan in the run-up to the May 2018 wedding. Prince and Princess of Wales, William and Kate Middleton, Cheered On Their First Public Appearance Since Prince Harry’s Memoir ‘Spare’ Hit Stands.

“If anything happened in the background, it didn’t happen in front of me. But yes, weddings are stressful at the best of times — and especially one at this high level; you’ve got to respect that,” the luxury tailor told the Daily Mail, according to People magazine.

He added, “They were faced with a problem like anyone gets at a wedding, with last-minute hitches. I can understand why anybody would be upset if the dresses weren’t fitting — it’s nerve-wracking.”

“I feel for them all because you wouldn’t want the children to go out on a big stage in an ill-fitting dress — and that’s what they were,” Mirpuri said of the short-sleeve white dresses with full skirts.

In his memoir, Harry has shared that four days before the wedding Kate texted Meghan and said, “Charlotte’s dress is too big, too long, too baggy. She cried when she tried it on at home.”

According to the book, Meghan directed her to see the tailor “standing by” at KP (Kensington Palace) since 8 am that morning, but Kate insisted “all the dresses need to be remade.” Harry writes that Kate came by the next day with flowers and a card to apologize.

Along with Princess Charlotte, Harry and Meghan’s other five young bridesmaids for their May 2018 wedding were Harry’s goddaughters Florence van Cutsem and Zalie Warren, Meghan’s goddaughters Rylan and Remi Lit and Ivy Mulroney, the daughter of Meghan’s friend Jessica Mulroney, as per People magazine.