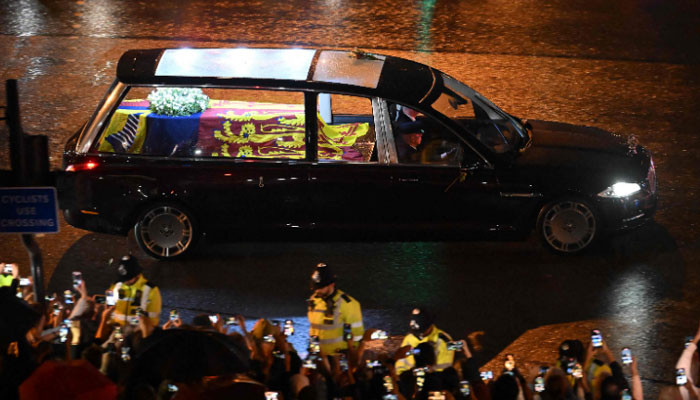 LONDON/BELFAST: King Charles and members of the royal family received the coffin of the late Queen Elizabeth at Buckingham Palace on Tuesday, after tens of thousands of people lined the streets in heavy rain to mark its arrival in the British capital.

On a dark night, the well-lit hearse travelled slowly from a nearby airport through London, with crowds stood all along the route, some in the road, others throwing flowers, and many ditching their cars or running from nearby streets to catch a glimpse of the cortege.

As it entered the grounds of the London palace, the police outriders who had led the way stopped to bow their heads.

Charles, who automatically became king on the death of his mother last week, had gathered to received the coffin along with his three siblings, two sons William and Harry, and other senior members of the royal family, a palace spokesperson said.

Elizabeth died peacefully on Thursday in her holiday home at Balmoral Castle, in the Scottish Highlands, at the age of 96, plunging the nation into 10 days of national mourning.

The death of Britain’s longest-reigning monarch has prompted hundreds of thousands of people to gather at royal palaces across the country to express their condolences.

Princess Anne, the queen’s only daughter, travelled with the coffin, first from the remote castle at Balmoral to Edinburgh, where it was greeted by tens of thousands of mourners, and then as it was brought to London.