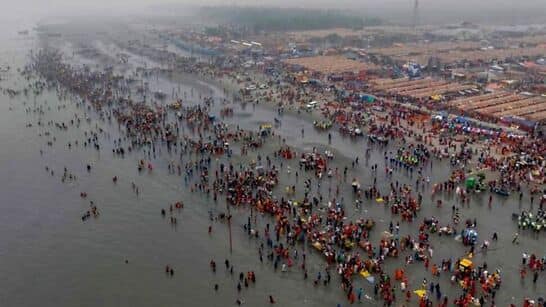 West Bengal: Lakhs of pilgrims took the holy dip at Gangasagar, the confluence of the Hooghly River and the Bay of Bengal, on the occasion of Makar Sankranti, a West Bengal minister said on Sunday. The auspicious timing for taking the holy dip began at 6.53 pm on Saturday and continued till sunset on Sunday. More than 51 lakh pilgrims from across the state and the country have visited Gangasagar in the last few days till 4 pm on Sunday, minister Aroop Biswas said, adding 10 lakh more were on their way to Sagar Island.

They took a holy dip at the confluence after offering puja at Kapil Muni Ashram. He said a total of seven people have died of heart attacks at the fair in the last few days, including two pilgrims from Uttar Pradesh during the day.

A total of 125 pilgrims are undergoing treatment at various hospitals on Sagar Island after falling ill due to various reasons, while 25 others have been shifted to Kolkata for better treatment.

The movement of vessels from the mainland to the island was suspended from 8 pm on Saturday to 9 am on Sunday due to thick fog, he said. Many among those who have completed the pilgrimage have started their homebound journey.

The minister of state for power and sports departments said that more than 1 crore people have witnessed the fair virtually. A total of 7,780 people across the country have availed of ‘e-snan’ services, under which holy water from Gangasagar is delivered to their doorsteps upon order.

Altogether 35 people have been arrested so far by the police for various crimes during the fair, which is being held under tight security. Personnel of the Indian Coast Guard (ICG) and disaster management teams have stepped up vigil along the coastline, while the police and civil defence volunteers were deployed at the fairground, he said.

More than 1,000 CCTV cameras and 25 drones have been deployed to monitor the entire venue. Jayanta Kushari, founder of Sarva Bharatiya Prachya Vidya Academy, a school of oriental studies, told PTI that the auspicious time for taking a holy dip on Makar Sankranti continued till sunset on Sunday.