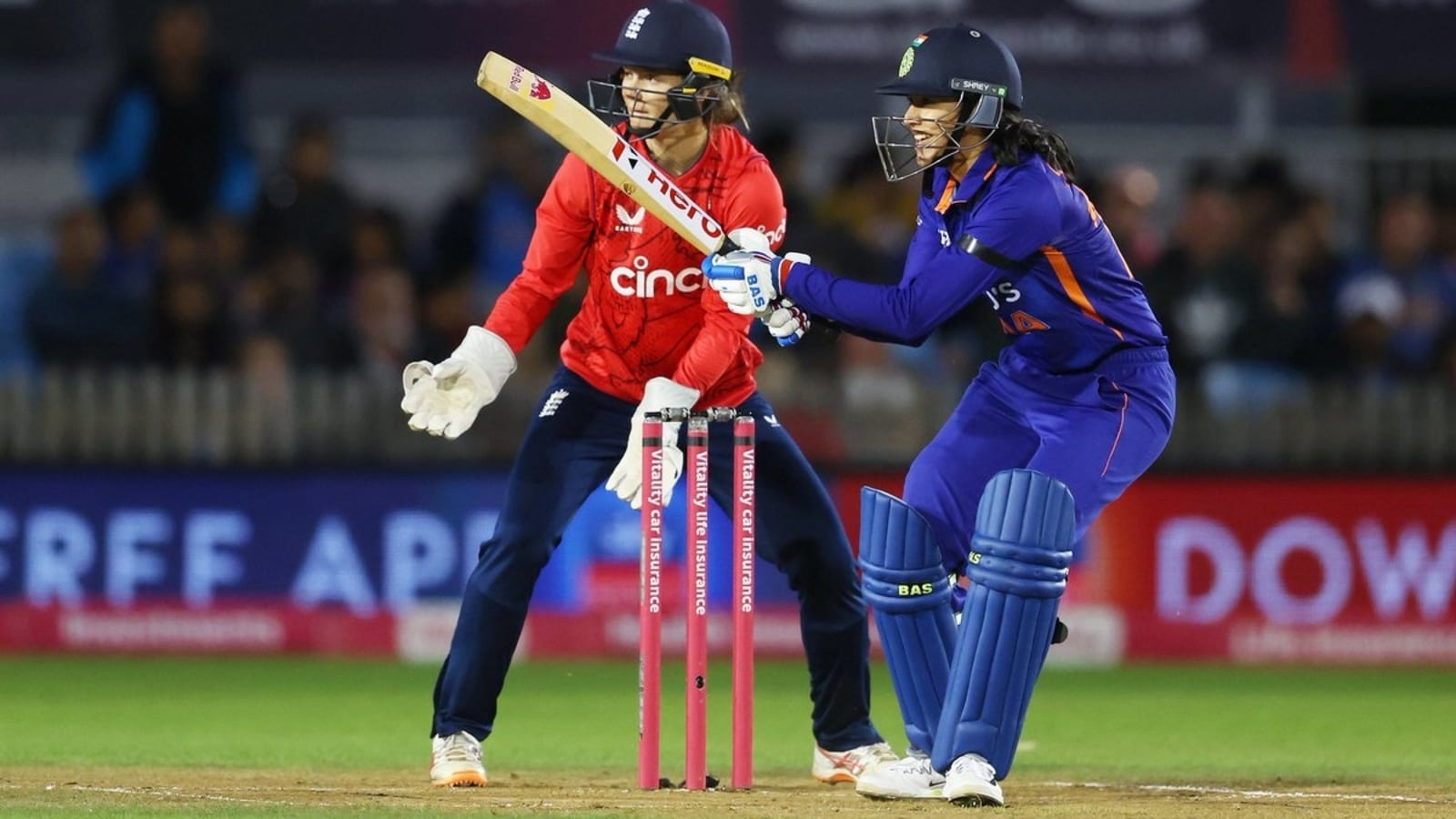 Smriti’s glorious unbeaten knock ensured that India avoided any hiccups to chase down a sub-par total set by the hosts England. She was ably accompanied by her captain right till the end to help India with their first win of the series, enabling the visitors to tie the series 1-1.

The Indian team made a decent start to their run chase after Freya Kemp became the youngest woman to make a T20I fifty for England, and helped her team reach a sub-par total.

Shafali Verma accompanied ace batter Mandhana to begin the innings. The duo took the attack to the English bowlers, hitting a flurry of boundaries in the powerplay. The southpaw Mandhana made merry of the bowling of first innings hero Freya Kemp, who came on to bowl the fifth over. Kemp was taken to the cleaners and was hit for four boundaries, including one off a free hit. Kemp proved to be expensive and gave away 19 runs in the first over.

India were cruising along to victory, but the introduction of Sophie Ecclestone saw Shafali Verma getting caught and bowled off the last bowl of the powerplay, giving England a much-required breakthrough. The visitors ended the powerplay brilliantly with a score of 55-1.

The departure of Shafali brought in Dayalan Hemalatha. Hemlatha did not trouble the English bowlers and was dismissed soon after scoring just nine runs in the ninth over, bringing the Indian captain to the crease.

Smriti continued to produce boundaries at regular intervals to let Kaur play second fiddle and settle in. The duo took India to 90-2 at the end of 10 overs with Mandhana at 43 off 28 balls and Kaur at 11 off six deliveries.

India did not have any difficulty getting the remainder of the runs with two of its most prolific batters at the crease. The duo stitched an unbeaten partnership of 69 runs to take India home in the 17th over.

Sophie Ecclestone and Freya Davies picked up a wicket each for England.

After electing to bat first the hosts lost wickets in quick succession to brilliant bowling from Indian bowlers. Deepti Sharma drew first blood in the sixth over, dismissing Dunkley on her very first ball of the match.

England were soon reduced to 16 for the loss of three wickets at the end of the third over with Renuka Singh finding the edge of Wyatt and a brilliant fielding effort from Radha Yadav saw the back of Alice Capsey. England ended the powerplay with 29-3.

A few good shots from Amy Jones helped the English team resurrect their innings but Sneh Rana struck twice to dismiss Bryony Smith and Jones to leave the hosts tottering at 60 for five at the end of 10 overs.

Maria Bouchier and Freya Kemp then took charge and unleashed some powerful shots down the ground, knitting an important sixth-wicket partnership. The sixth wicket partnership was worth 65 in eight overs, giving the hosts something to defend ending with 142 at the end of the 20 overs.

Kemp played a blitzer of an innings and was helped by the late flourish of Bouchier. Sneh Rana was the pick of the bowlers picking up three wickets for India while giving away just 24 runs.

India chased down the target with 20 balls to spare, levelling the series. The decider will now be played in Bristol on September 15 with the series on the line.

Smriti Mandhana was adjudged the ‘Player of the Match’ for her match-winning knock of 79 runs that included 13 boundaries.

Karthik’s huge remark on ‘favourite’ Sanju Samson: ‘We have to speak about him’ | Cricket