Maruti Jimny, Mahindra Thar and Force Gurkha 5-door: what all is different 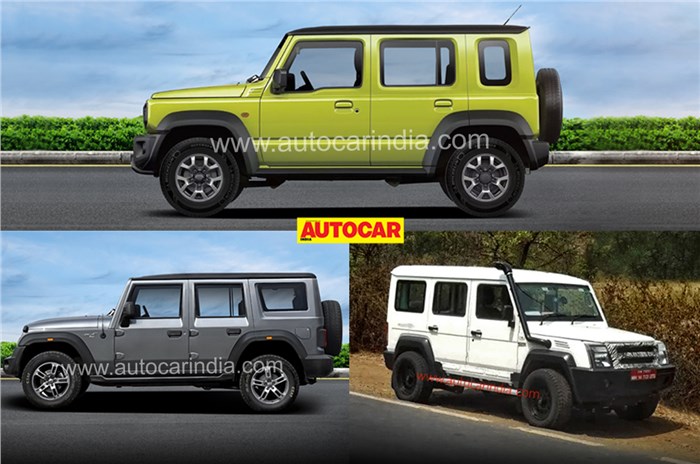 Off road enthusiasts will appreciate the new-found usability with all three SUVs due in 2023.

There’s no denying that the Mahindra Thar has made serious off-roading a lot more accessible, as, unlike the previous-gen model, it also combines conveniences for everyday usability. The three-door setup however would still keep some consumers away from the SUV and so to widen the appeal of that off-roading image and capability, Mahindra has been working on a five-door version of the Thar.

Force Motors too whose new Gurkha has been embellished with some modern conveniences is readying a 5-door version of its own and interestingly, Maruti Suzuki also has a five-door version of the Jimny coming up that’s specifically built for India. These vehicles will naturally appeal to a much wider audience, especially larger families, while still offering excellent go-anywhere ability.

With ladder frame underpinnings and serious off-road hardware, all these upcoming SUVs will be targeted at the same audience – lifestyle off-road enthusiasts – but they will still be vastly different from each other. We explore what’s going to set each of these SUVs apart.

All three SUVs will be based on a long wheelbase version of their existing three-door chassis. The three-door Jimny measures 3,550mm in length and has a wheelbase of 2,250mm. As we have reported previously, the Jimny 5 door will see a 300mm increase in wheelbase, taking overall length to 3,850mm. It will still measure under 4 metres in length, and, of the three SUVs, will be the only one to fit into the sub-4m category.

Meanwhile, the three-door Gurkha measures 4,116mm in length and has a wheelbase of 2,400mm, and the five-door model is expected to get a 400mm increase in wheelbase. That will likely give it the longest wheelbase of the lot, with its overall length going well beyond 4.5 metres.

All three SUVs will widely differ in terms of their powertrain configurations as well. The Jimny will be a petrol-only SUV and will come powered by the 1.5-litre, K15C four-cylinder, naturally aspirated engine that already does duty in a host of Maruti Suzuki cars in India. Unique to the Jimny will be the mild-hybrid technology that’s already offered on all models powered by this engine.

Meanwhile, the five-door Gurkha will be a diesel-only SUV, carrying over the Mercedes-sourced 2.6-litre diesel unit that already does duty on the three-door model. It could, however, see a bump in power from the current 91hp to cope with the additional size and weight.

The five-door Thar, meanwhile, will have both petrol and diesel engine options. It will carry over the 2.2-litre mHawk diesel and 2.0-litre mStallion petrol engines from the three-door model. And while power and torque figures are yet to be confirmed, it will likely be close to that of the Scorpio N.

Another key difference will lie in the fact that the five-door Gurkha will only be offered with a manual gearbox, just like its three-door sibling, while five-door versions of the Jimny and Thar will have both manual and automatic gearbox options.

Currently, the three-door versions of the Thar and Gurkha, and the Jimny sold overseas are all four-seater models. However, in their five-door configuration, the Thar and Jimny will gain bench seats for the second row to make for a five-seater SUV. In case of the Thar, Mahindra could even offer a third-row of seats with a bench layout, as is the case for the Scorpio N.

However, the five-door Gurkha will be offered in multiple seating configurations. It has been spied on test with captain seats for both second and third rows on one occasion, and with double side-facing jump seats on another. Additionally, a bench seat for the third-row will also be in the offing, which means it will come in at least 6-, 7-, and 9-seater configurations.

Five-door Jimny vs Thar vs Gurkha: the commonality

What will remain at the core of all three upcoming SUVs is that they will be hardcore off-roaders with tough ladder-frame underpinnings. A four-wheel drive system, robust suspension set-up, locking differentials and a low range transfer case will set these SUVs apart from the sea of front-wheel drive, monocoque SUVs currently available in the market. The five-door versions of these SUVs may compromise on the off-road ability to some extent (reduced breakover angles and more weight), but their duality of character should be more than able to compensate for it.

All three SUVs already enjoy a cult following in our country, and now, with more factors favouring the usability of their five-door versions, the adventure of off-roading is soon set to get a big shot in the arm.

Which of these upcoming hardcore off-roaders are you most looking forward to? Let us know in the comments below.

Feature: A history of Suzuki and 4WD