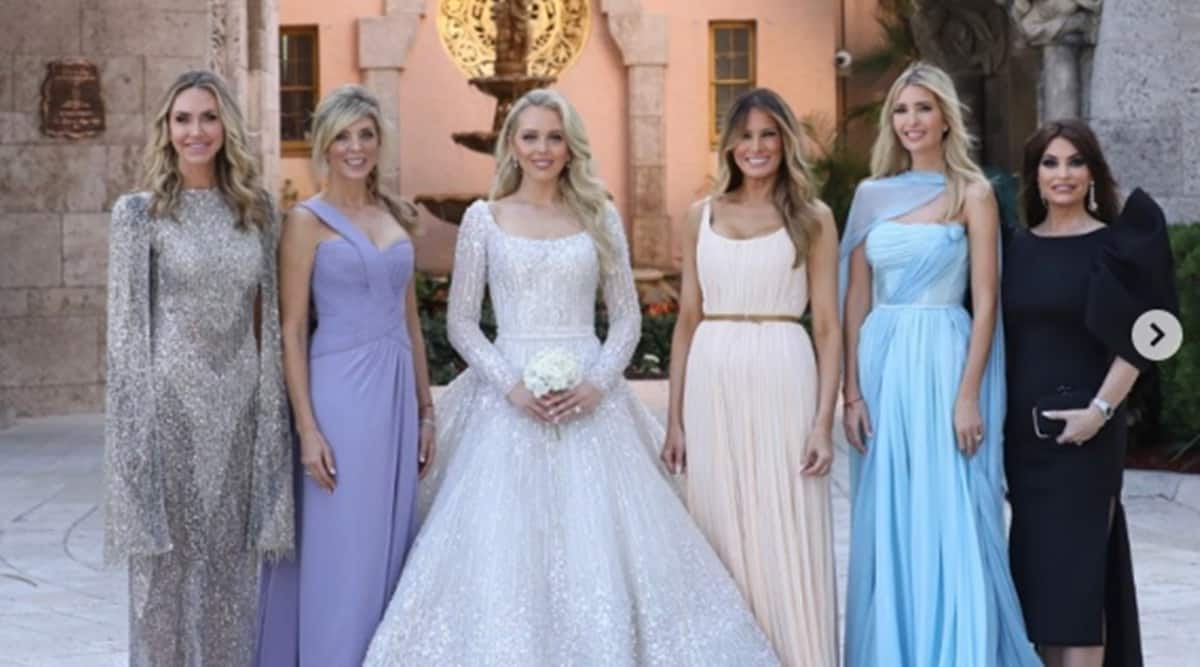 In many Western countries, there is an unspoken wedding rule, rather an etiquette, that guests must not wear anything white, as it is the colour of the bridal gown. They must also refrain from trying to upstage the bride by wearing something too dramatic or loud that puts them under the spotlight instead of letting the bride and the groom enjoy their special occasion.

Last year, Kendall Jenner faced a lot of backlash for her choice of dress at a friend’s wedding. The model attended Lauren Perez’s wedding reception wearing a black dress from Mônot’s SS22 collection that stood out for its bizarre symmetrical diamond cut-outs all over, which gave the Keeping Up With The Kardashians star a risqué appearance.

Now, Melania Trump has been called out on social media for flouting the wedding etiquette at her stepdaughter Tiffany Trump’s wedding.

Tiffany, who is the youngest daughter of former US president Donald Trump and his only child with ex-wife Marla Maples, married beau Michael Boulos at Mar-a-Lago in Florida. As a nod to her husband’s Lebanese American heritage, the 29-year-old wore a stunning Elie Saab wedding gown, which featured a fitted bodice, long sleeves and a floor-sweeping train.

For the occasion, Melania — the former first lady of the US and Donald Trump’s current wife — wore a cream-coloured gown that also featured a belt. According to news reports, it is not certain if the bride had asked her guests to follow a dress code, but her sister Ivanka Trump — who was the maid of honour — and the rest of her bridesmaids were seen in powder blue gowns. Many other guests were seen in pale or pastel coloured gown, including the bride’s mother Marla Maples, who wore a lavender-coloured gown.

But Melania’s outfit is being discussed by netizens, who are saying that the off-white colour is too close to Tiffany’s white wedding gown.

Check out some reactions:

okay we’ve all talked about ‘the crop’ but has anyone said anything about Melania going full Evil Stepmother and wearing a dress that can only be described as “not white because I’m wearing a belt” pic.twitter.com/4q6HKJrFDP

Leave it to Melania to wear a white dress to a wedding. How utterly tacky.

Why is she wearing a white dress?? I swear we need an entire show of the fashion police for this event. From Kimberly gargoyles bat dress, ivanka’s belly dancing costume, and now Melania wearing white, it’s like don’t these women have stylists??

What is your opinion?