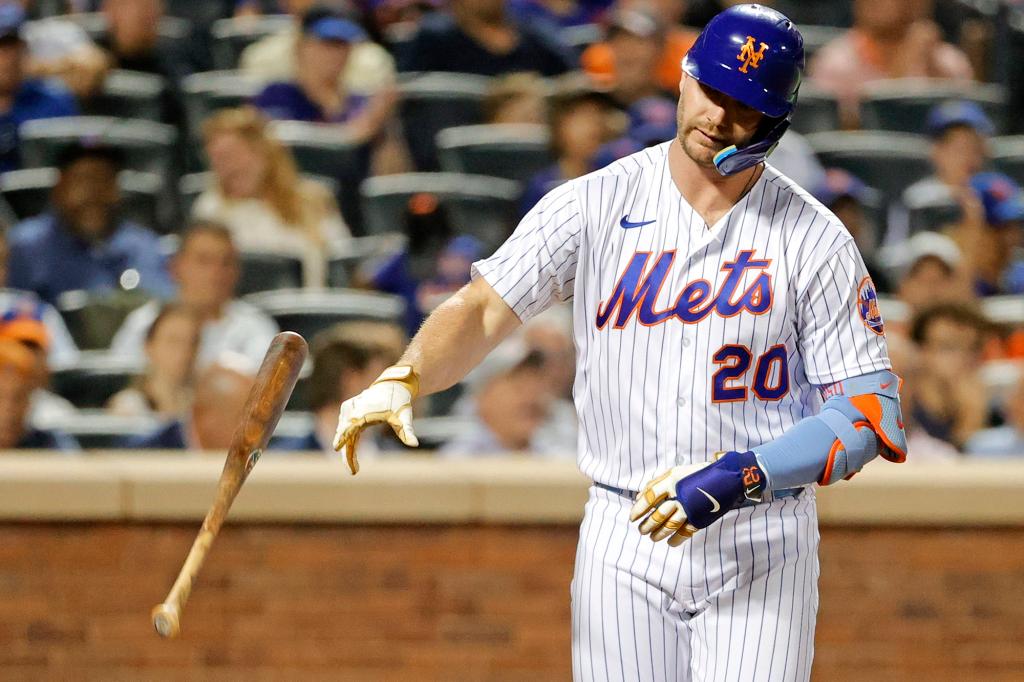 The Mets heard a sound mainly foreign in 2022 at Citi Field on Tuesday night. Boos. They were not thunderous, but they also were not voiced once or twice. It was part of the soundtrack of yet another frustrating loss against a not-very-good opponent.

This was supposed to be the easy part of the schedule, the part during which the Mets attached a strong finish to a mainly upbeat first five months of the 2022 campaign. The part in which the fans reveled in the countdown toward a first NL East title since 2015.

Instead, the Mets are wobbling, like a tired marathoner feeling for a finish line that is still not a step or two away.

“September is an eternity when you are trying to finish off a good season,” Buck Showalter said.

The Mets manager said that as he retreated to his office Tuesday night after discussing a second straight loss to the Cubs, this one 4-1, during his postgame press conference. Showalter talked a lot about near misses and things that could have been.

The Mets had the potential to open a lead in the first inning. But Brandon Nimmo was called out when he was hit by what would likely have been a clean Jeff McNeil ground single, and Pete Alonso missed a two-run homer by inches when he said the wind blew his launch just to the foul side of the left-field foul pole. By the time Alonso hit his 34th homer, it was the ninth inning and the blast was cosmetic — much like the ninth-inning homer that Francisco Lindor drilled the previous night in a 5-2 Cubs triumph.

The two losses to the Cubs left the Mets 5-6 in an 11-game span against the Nationals, Pirates, Marlins and Cubs. Chicago is the “best” of those clubs at 22 games under .500. The Mets still hold first place with 19 games remaining, which moved Alonso to say: “We have earned every single bit of where we’re at. We haven’t been lucky. We’ve been really, really good all year long. So we earned everything that we’ve gotten and we’ve earned the position that we’re in.”

To Alonso’s words, there is no reason for the Mets to glumly hang their heads, though the lack of offense has had a sapping impact on the team-wide energy. The Mets still have the NL’s softest schedule from here until the end of the season, but they are going to need their offense to find the consistency of damage that marked the opening months of the season.

That has been made harder by the inability to implement the three complementary pieces they obtained at the trade deadline. Tyler Naquin, Darrin Ruf and Daniel Vogelbach began the game Tuesday collectively hitting .212 as Mets, with a .682 OPS. Then Vogelbach went 0-for-3 to fall to 5-for-42 in his last 16 games without an extra-base hit. He received as many boos as any Met in the loss as he continued a cycle from folk hero, in the immediate aftermath of the trade, to “get him out of the lineup.”

Between Alonso’s near homer in the first inning and his actual homer in the ninth, the Mets did not muster much of a threat, managing just three at-bats (without a hit) with runners in scoring position.

Jacob deGrom tied a major league mark with a 39th consecutive start of allowing three earned runs or fewer (he now shares it with Jim Scott, 1913-14). DeGrom struck out 10, but was not overwhelming in allowing three runs in six innings (a quality start in stat terms, but not deGrom terms). But if a Mets fan is looking for encouragement it is this: Before the game, pitching coach Jeremy Hefner described deGrom as having now completed his spring training in the majors and that the tethers are off. The Mets’ belief is he now can be handed the ball every fifth day until the season ends.

Max Scherzer is scheduled to start at Triple-A on Wednesday. Hefner said if Scherzer had not been put on the injured list with left side irritation, the veteran righty has looked so good of late he would have started in the majors Wednesday. Instead, he will be reinserted into the rotation the next time through. Not only will that put the co-aces together for the stretch, but also the veteran five-man rotation will be whole again, creating a cascade that could benefit the bullpen.

David Peterson will start Wednesday, but the Mets are toying with having him share the first five or six innings with Trevor Williams under certain circumstances. If they do, Peterson would be available out of the pen no later than Sunday against Pittsburgh. The Mets never did find a trustworthy lefty reliever despite their season-long need. When they took their team photo Tuesday afternoon, Joely Rodriguez and Alex Claudio were the only lefty relievers posing for the camera.

Hefner said he believes that the combination, in particular, of Peterson’s slider and his sinker that bores in on lefties will translate to the bullpen. Showalter and Hefner acknowledged they will likely have to find critical situations to test Peterson and Tylor Megill (five runs in two-thirds of an inning at Triple-A on Tuesday in possibly his last pen audition before promotion) to see what they have for the playoff bullpen as the Mets are simultaneously working to hold on to win the NL East.

“It’s going to be a challenge to wade through and try to win the game, which is the most important thing, but also to accomplish some little things,” Showalter conceded.

The big thing, though, is to begin to take advantage of a soft schedule by rediscovering the first five months of the season.

Jimmy Garoppolo carted off with injury in 49ers vs. Dolphins