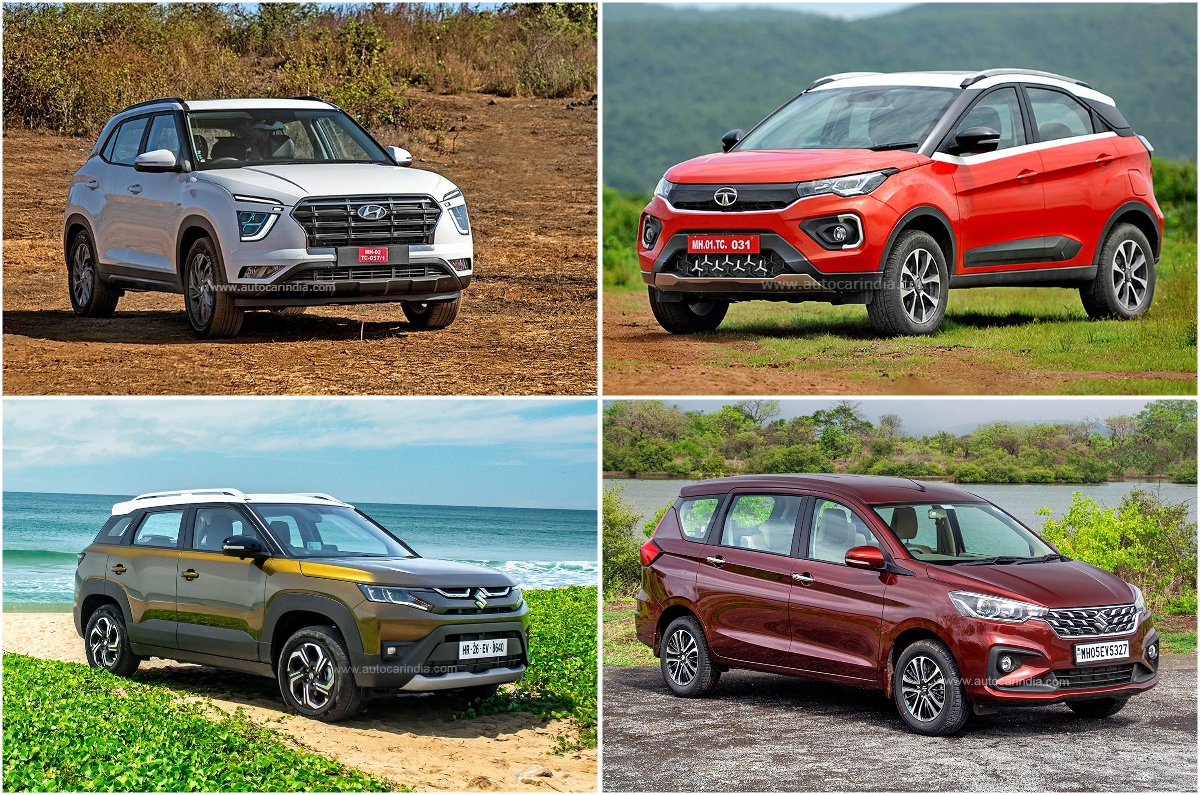 Out of top 25 vehicles sold in India, 11 are SUVs; Tata Nexon leads the pack.

The Society of Indian Automobile Manufacturers (SIAM) has announced wholesale passenger vehicle sales in our country for 2022. Manufacturers sold nearly 3.8 million vehicles (23 percent rise over the previous year), with SUVs and MPVs remaining the bestsellers. Between January and December 2022 (CY2022), the UV segment accounted for over 1.9 million units, which is 50 percent of all vehicles sold and a 35 percent rise over last year.

The Tata Nexon easily retains its title as India’s bestselling SUV with 1,68,278 units, and is ahead of the Hyundai Creta by 27,383 units. Averaging monthly sales of 14,023 units, its best-ever single month sales were in November 2022: 15,081 units. Sold in as many as 79 variants – 67 petrol and diesel, and 12 electric – this is one SUV where buyers are really spoilt for choice.

Coming third in the rankings is the popular Maruti Suzuki Ertiga with 1,33,814 units sold. In a market teeming with compact SUVs and midsize SUVs, the Ertiga continues to maintain a strong presence, delivering the goods consistently.

In mid-April 2022, Maruti Suzuki launched the updated Ertiga, with a restyled front end, changes to the interior and came powered with an upgraded 1.5-litre petrol engine with DualJet and start-stop technology. It also introduced a CNG option to the new line-up with the same 1.5 DualJet engine. Pricing for the Ertiga model range starts at Rs 8,35,000 going up to Rs 11.29 lakh for the top-end non-automatic variant.

The MPV also has a Tour M variant with CNG that’s targeted at fleet operators.

Maruti Suzuki India’s Brezza sold 1,30,563 units, just 3,251 units shy of sibling Ertiga. Following the launch of the second-generation Brezza compact SUV, on June 30 at Rs 7,99,000, demand for this model surged and the company recorded its best monthly wholesales of 15,445 units in September 2022. In fact, this is the best monthly figure for any SUV in CY2022, beating the Tata Nexon’s 15,085 units in August.

Four days before its launch, on October 14, 2021, the Tata Punch also aced the Global NCAP crash test with a 5-star rating. In the past year, the Punch has quickly moved into becoming Tata Motors’ second bestselling model after the Nexon.

The Venue, Hyundai’s first-ever compact SUV, is the sixth bestselling vehicle in the market with 1,20,703 units. In September 2022, to expand the product’s allure, the company launched the Venue N Line at Rs 12.16 lakh. The N Line came with a single powertrain – a 120hp, 172Nm, 1.0-litre turbo-petrol engine paired to the 7-speed DCT with paddle shifters – with cosmetic changes being the talking point of the variant.

The changing market dynamics in the top 25 vehicles sold – compact SUVs and midsize SUVs are represented by 11 models with a 44 percent share, albeit compact SUVs have 50 percent of cumulative sales.

Seen from the perspective of total sales in CY2022, these 11 compact UVs account for 45 percent sales showing just how strong the demand for these below 4,000mm-long models is.

In CY2022, total UV sales of 19,22,766 units fell short of the 2 million milestone by 77,234 units, but given the strong double-digit growth last year and a good number of new models hitting the market, this number should be crossed in CY2023.

Meanwhile, with three months left for FY2023 to close, the UV segment has already clocked 99 percent of FY2022’s sales. But that calls for another deep dive into wholesales. Keep watching this space.

SUV sales race past hatchbacks’ in India this year

Tata Motors achieves half a million annual sales milestone in 2022