Nicholas Goldberg: How did Fox News use its power after 2020 election? 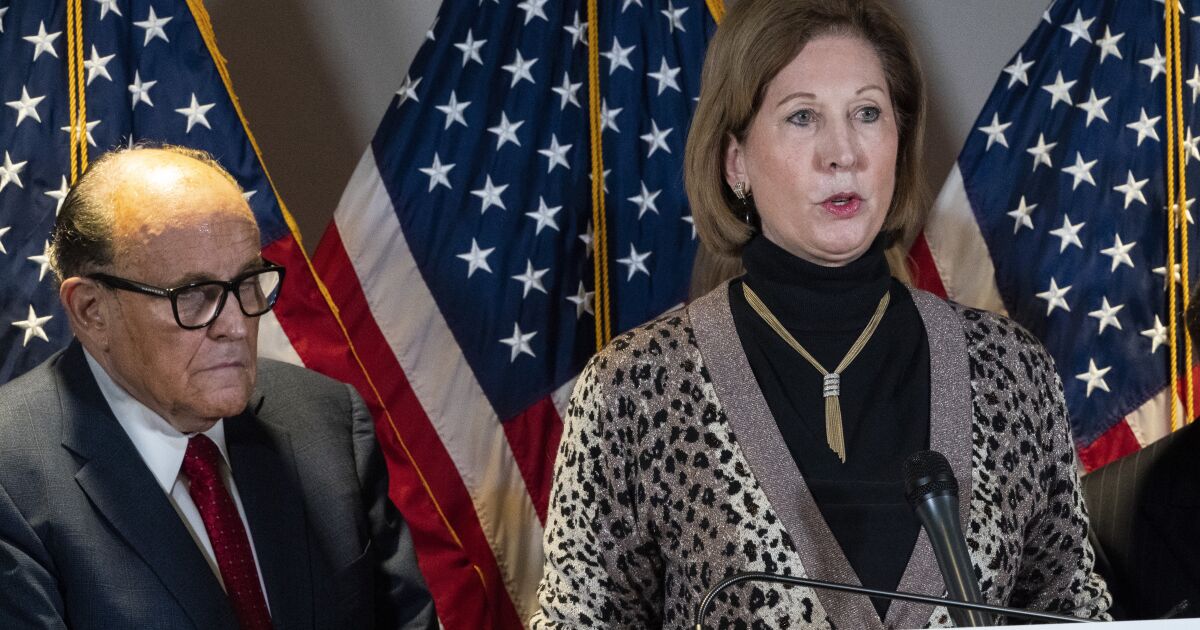 Some of the key players have recently been deposed or are scheduled to be in the coming weeks. Sean Hannity. Tucker Carlson. Lou Dobbs. Maria Bartiromo. Even Rupert and Lachlan Murdoch could find themselves answering questions. The case is slated for trial early next year.

On the most basic level the lawsuit is about the outrageous claims of fraud that emerged in the aftermath of the 2020 election, when Donald Trump’s irresponsible, stop-at-nothing flunkies and lackeys were peddling false stories in an effort to undermine the outcome of the vote.

Among the most outlandish of their assertions were those about Dominion. According to Trump’s supporters, the company was a front for the left-wing government in Venezuela, and its election machines were rigged to flip votes from Trump to Joe Biden to guarantee a Democratic victory. House Speaker Nancy Pelosi’s husband supposedly had a financial stake in this nefarious company.

The president’s lawyers, Rudolph W. Giuliani and Sidney Powell, appeared on Fox News over and over and repeated unsubstantiated, far-fetched claims about the company.

I can certainly understand why so many people are hoping for a quick, decisive judgment in the Delaware courts against Fox. Truth and the democratic process came under attack, and rational, fact-based Americans would like to see perpetrators held to account. (A similar defamation case is pending against Fox brought by another voting technology company, Smartmatic. I wrote about both cases previously here.)

“Fox Corporation and its crown jewel, Fox News, together one of the most powerful media empires in the United States, gave life to a manufactured story line about election fraud that cast a then-little-known voting machine company called Dominion, as a villain,” said the company in its complaint against the broadcaster. “… Fox gave those fictions a prominence they otherwise never would have achieved.

I get that argument. But as a journalist, I also have to worry about another aspect of the case: its ramifications for my industry and for the future of news coverage.

Even if what was said about Dominion was utter hogwash, is Fox really to blame? Was the conservative news network a conspirator along with Giuliani and Powell in deceiving the public? Or was it simply covering a newsworthy story?

As Fox rightly notes, journalists in a free society have to be allowed to cover important news events and debates. If senior White House aides and presidential confidantes are asserting — even wrongly — that the election was rigged, that’s news.

Fox argues that it didn’t invent the allegations about Dominion. It merely did its journalistic job.

“The news media has the right in a democracy to inform citizens by reporting and commenting on a president’s allegations challenging the security of our elections,” said Fox in its defense. “…There are two sides to every story. The press must remain free to cover both sides, or there will be a free press no more.”

So is Dominion or Fox right?

Under the law, Dominion must meet a high bar to win the case, proving either that Fox knew what it was airing was false or that it behaved with reckless disregard for the truth. Whether it will meet that bar, I’m not expert enough to say.

But I can say this as a journalist about news coverage.

Fox is right that news organizations have to be free to report what Trump associates like Giuliani and Powell are saying. But along with the right to cover the news comes a responsibility to do so fairly, honestly and clearly.

Covering the story fairly requires adherence to certain long-established journalistic principles: even-handedness, open-mindedness and skepticism. Fox is entitled to its politics, but it had an obligation to separate the facts from the unproved allegations — what was known from what was merely suspected. Even its opinion journalists should have highlighted Dominion’s denials, and those of voting experts, more assiduously.

Unfortunately, even-handedness is a bit out of fashion lately. It’s one of the casualties of partisan or ideologically driven news gathering.

Dominion has offered a number of examples of Fox’s hosts stating more than they actually knew — and seeming to take sides with Giuliani and Powell. Lou Dobbs, for instance, said flatly that the voting machines “were designed to be inaccurate,” according to the lawsuit. He thanked Giuliani for “pursuing what is the truth.”

When Jeanine Pirro said Dominion was an organized criminal enterprise started in Venezuela with Cuban money, she acknowledged that she was restating allegations she’d heard from the president’s lawyers. But when Bartiromo said on the air, “I understand Nancy Pelosi has an interest in this company,” she included no such qualification.

And Bartiromo continued to allege fraud claims about Dominion “even though she had been specifically notified that independent fact-checkers, government officials and election security experts debunked those lies,” according to the lawsuit.

Fox hosts occasionally noted Dominion’s denials. Some, to their credit, were more skeptical than others. Fox insists everything it did is protected by the 1st Amendment and that Dominion is “cherry-picking” evidence against it. It notes that it invited Dominion to appear on the network to dispute the allegations.

But I still believe, as I said last year when writing about Smartmatic’s lawsuit, that some of Fox’s hosts behaved more like credulous partisans than careful news gatherers.

As a journalist, I believe the country needs robust legal protections to ensure the news media aren’t punished for doing their jobs.

But with great power comes — well, we all know what it comes with.