Nicholas Goldberg: If it costs $23 to enter Manhattan by car, is that fair to lower-income drivers? 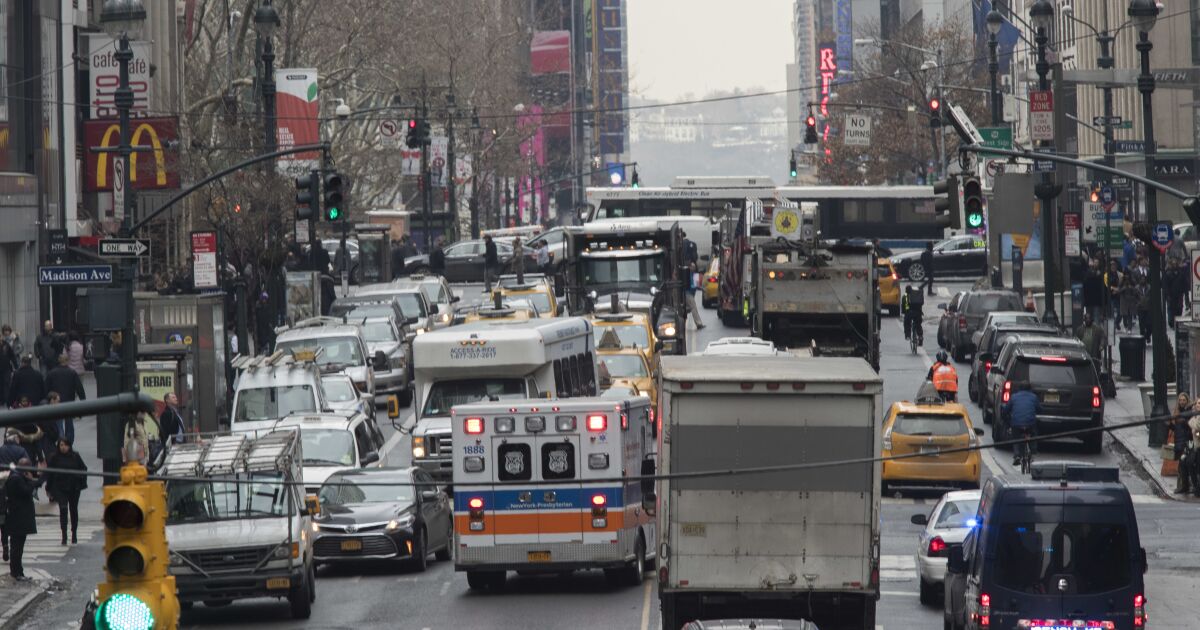 New York City is moving forward on a “congestion pricing” plan under which people will have to pay a fee to drive into midtown or downtown Manhattan — virtually everything below 60th Street. The goal is to clear traffic and cut emissions by reducing the number of cars in the heart of the crowded city.

That’s a great goal. Midtown Manhattan in particular has been a teeming, overloaded mess my whole life, a sea of honking cabs and trucks and cars carrying workers, tourists and commuters through often-gridlocked streets.

Discouraging driving while encouraging mass transit use is the right thing to do.

But here’s what congestion pricing plans always make me wonder: If you want to reduce driving, is it absolutely necessary to do it by charging for the privilege? The right to drive into the city center has always been a right shared by all — but now government is proposing to disburse it to some people and not others based on who can afford the fee. Those who can pay: Welcome! The rest of you, turn around and go home.

I’m not rejecting the idea — actually there are plenty of strong, rational arguments for it and most transit advocates seem to support it — but, hey, just a thought experiment: Shouldn’t we every now and then think about whether there are ways to solve problems other than by separating those with more money from those with less?

Paying as much as $23 to get into Manhattan’s central business district at rush hour is not nothing, as evidenced by the fact that 400 people signed up to speak at the first in a series of hearings on the subject in late August. (The proposal does promise tax credits for households earning less than $60,000 a year.)

I know, I know. We live in a capitalist, market-based society. We regulate our economy on the basis of supply and demand. Our natural reaction when we have to limit a scarce good is to put a price on it, or raise the price if it’s already got one.

Consider California’s carpool lanes. Where once they were limited to cars with two or more people, we now have Fast Track lanes on some freeways, where those with the money to pay can zip along avoiding traffic jams while driving alone in their SUVs.

Michael Sandel, a professor of political philosophy at Harvard, pointed out a decade ago in his book “What Money Can’t Buy” that many things that never were for sale in the past now are. A prison cell upgrade for less than $100 was one example. The right to immigrate to the United States for a few hundred thousand dollars was another.

Some things, he said, just don’t belong on the market.

And it does raise fairness questions, especially when the fees are set by government, which is supposed to work for all of us. Imagine if the Department of Motor Vehicles started letting people who paid a $150 fee waltz to the front of the line while the rest of us had to stand and wait. Would that be fair? Would we put up with it?

There are alternatives to the market, at least in theory. Scarce goods can also be given out on a first-come, first-served basis. Or by lottery. Or based on a showing of need. Or as a reward for good behavior.

In Manhattan’s business district, you could theoretically allow in low-emitting vehicles and bar heavy polluters. Or ban vehicles altogether in favor of buses, bicycles and pedestrians. Or set limits on taxis, Ubers and Lyfts. Or require drivers to show a need to come in to the city center for essential business.

But that’s all just a thought experiment. New York is going the pay-your-way route, if it moves forward. As London already has.

Given that, let’s remember one of the biggest advantages of congestion pricing: It brings in revenue. New York City says it would raise $1 billion a year.

So of course that money should be used — and will be used — to counterbalance the inequities.

Michael Manville, an associate professor of urban planning at the UCLA Luskin School of Public Affairs, has written that it is possible to put a price on driving while also maintaining a commitment to economic fairness.

“The fact that pricing could create equity problems doesn’t mean it must. Nor does it mean that for the sake of equity all roads should be free,” he wrote in Transfers magazine. “Few equity agendas in other areas of social policy, after all, demand that all goods be free. Almost no one, for example, suggests that all food be free because some people are poor. Society instead identifies poor people and helps them buy food.”

New York, to its credit, intends to put most of the money raised toward improving bus and subway service and transit infrastructure, which are disproportionately used by low-income people.

There are carve-outs from the fees for vehicles carrying disabled people. There are the tax credits for drivers from families that earn less than $60,000 (though those earning more will certainly feel the pinch).

There are also side benefits for lower-income New Yorkers. Public buses will presumably be able to move more freely through now-less-crowded areas in midtown and downtown. Air pollution, which disproportionately affects poorer people, will be reduced.

Most transportation experts I’ve spoken to believe Americans will be persuaded to drive less only if the price is driven up and alternatives become more attractive. If that’s true, congestion pricing may be essential to reducing emissions.

So maybe it’s the right solution — or maybe it’s the only workable solution. But I still think we need to think beyond market solutions at least some of the time so that we don’t solve policy problems by burdening the poor and letting the wealthy continue their bad behavior.