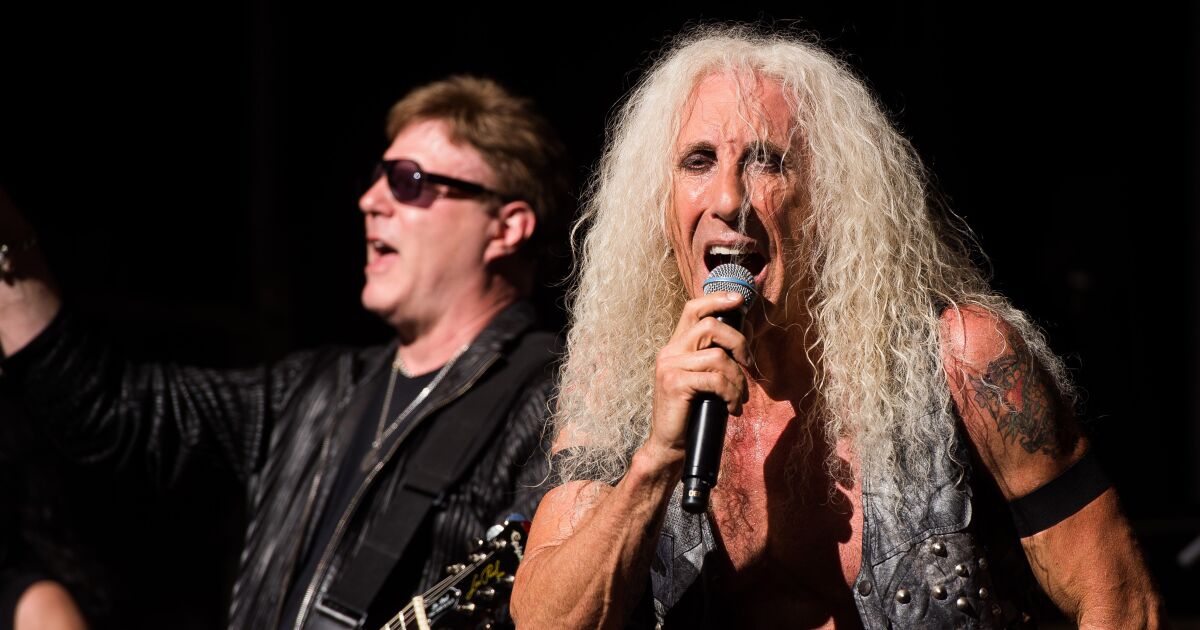 Last week, Dee Snider, frontman for the 1980s heavy metal band Twisted Sister, made it clear how he felt about Arizona GOP gubernatorial candidate Kari Lake and other Trump-suppporting Republicans using his song “We’re Not Gonna Take It” at their campaign rallies.

“Attention QANON MAGAT FASCISTS,” he tweeted. “Every time you sing ‘We’re Not Gonna Take It’ remember it was written by a cross-dressing, libtard, tree hugging half-Jew who HATES everything you stand for. It was you and people like you that inspired every angry word of that song.”

In another tweet he told Lake: “Write your own damn song.”

That’s a pretty unequivocal message and one I firmly support. If the guy who wrote “We’re Not Gonna Take It” says his meaning is being distorted and he doesn’t want his song associated with the campaign, then by all means drop it! Write your own! Or go find a Ted Nugent song. He’ll let you use it.

Campaign songs date back to the earliest days of American politics. (Apparently they were partly designed to spread the candidate’s message to voters who couldn’t read.)

John Adams campaigned to a song called “Adams and Liberty” in the election of 1800. Abraham Lincoln used the song “Battle Cry of Freedom” during his 1864 campaign in the midst of the Civil War.

In the modern era they’re less about spreading specific messages and more about rousing and motivating voters, and propelling them on to the polls. Uptempo, driving, patriotic, anthemic and with as few specifics as possible — these are songs that create moods and stir emotional juices.

During the Depression, Franklin D. Roosevelt adopted as his theme the rousing “Happy Days Are Here Again” because of its promise of better times ahead; in 1960, Frank Sinatra recorded a reworded version of “High Hopes” for John F. Kennedy’s campaign, also for its message of optimism.

“We’re Not Gonna Take It” is more in the we’re-mad-as-hell-throw-the-bums-out vein. It’s useful precisely because it’s not entirely clear what it is that Snider’s not going to take any more of.

I’m no stranger to how candidates use campaign songs. When I covered candidate Bill Clinton in 1992, I watched him bound onto the stage to a recording of Fleetwood Mac singing “don’t stop thinking about tomorrow” day after day after day for months. I still can’t listen to the song without having flashbacks.

Here’s the thing, though: Fleetwood Mac didn’t mind having its music used on Clinton’s behalf. In fact, the band’s members overcame their famously bad interpersonal relations to reunite and play “Don’t Stop” at his inauguration.

But it’s not always that straightforward and congenial.

A rebellion by recording artists seems to have been launched by Bruce Springsteen in 1984, after President Reagan said during a campaign stop in New Jersey, “America’s future rests…in the message of hope in the songs of a man so many young Americans admire — New Jersey’s own, Bruce Springsteen.”

Apparently, the Boss was not pleased about being wrapped in the embrace of a conservative septuagenarian Republican president. “Well, the president was mentioning my name in his speech the other day,” Springsteen said two days later in Pittsburgh. He went on to suggest that Reagan probably hadn’t been listening to his lyrics all that closely.

Springsteen had already denied Reagan permission to use “Born in the USA” as a campaign song (and he was right that if Reagan had actually listened to the lyrics he probably wouldn’t have wanted to).

Since then, the conflicts have kept on coming, overwhelmingly involving liberal songwriters and Republican candidates. Here are a few examples:

Bobby McFerrin wouldn’t let George H.W. Bush use “Don’t Worry, Be Happy” in 1988 because McFerrin supported Democrat Michael Dukakis for president. (Bush used “This Land Is Your Land” instead, which probably had left-wing rabble-rouser Woody Guthrie spinning in his grave.)

GOP presidential nominee Bob Dole in 1996 used “Soul Man,” altering the lyrics to make it “Dole Man” — leading to complaints from Isaac Hayes and his co-writer, who didn’t want anyone thinking they were endorsing the Republican. They threatened to sue for $10,000 every time the song was played. The campaign backed down, perhaps realizing that “Dole Man” was a pretty dumb joke.

In 2008, Jackson Browne sued Sen. John McCain for using “Running on Empty” in a TV spot. He won a settlement and a public apology.

Then there’s Donald Trump. Numerous artists have asked him to please not play their music at his rallies. In 2020, when he used Neil Young’s “Rockin’ in the Free World,” for example, Young explained that he supported a certain socialist senator from Vermont. (“His initials are BS. Not his policies,” wrote Young.)

Trump also used “You Can’t Always Get What You Want,” though I have no idea how he thought he’d benefit by sending such a negative no-can-do message. The indignant Rolling Stones sent him numerous cease-and-desist letters.

Often the venue or the campaign has purchased a blanket license to use a wide range of music through the performance rights organizations ASCAP and BMI, and therefore doesn’t need the creator’s permission. Still, there are situations in which artists can successfully object to the use of their work.

Often enough, though, falling back on social media and public shaming is the best recourse.

So my advice to Dee Snider is, keep on screaming, just like you do in the song. Let them know you’re not gonna take it.