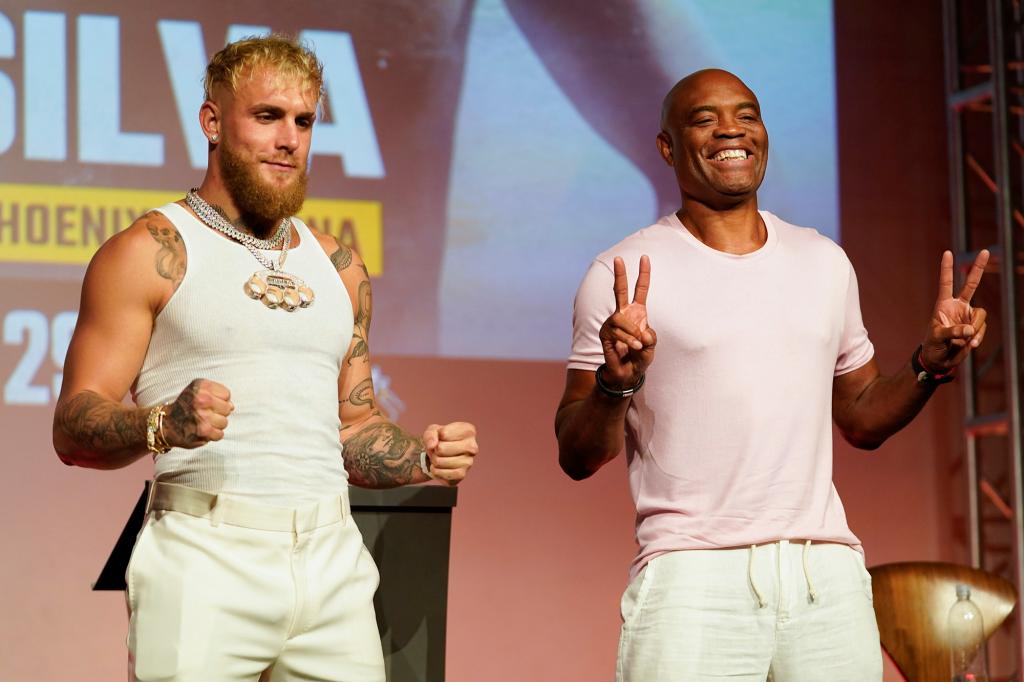 The next time Anderson Silva competes in combat sports, it will mark a first in the career of the legendary former UFC middleweight.

As of one week ago, “The Spider” is now “the grandfather.”

“I’m so excited because, now, I can change everything,” Silva told The Post via Zoom on Monday while promoting his Oct. 29 boxing match against pugilist/social media crossover star Jake Paul. “Now, I [can] go take my grandchildren and do something crazy [to] make my son crazy.”

The newly christened Baddest Granddad on the Planet, who alluded to becoming a grandfather for the first time earlier Monday during the Los Angeles press conference promoting his fight with Paul in Glendale, Ariz., next month, will have plenty of time before the newest spiderling fulfills grandpa’s dreams of destroying his son’s “whole house.”

In the meantime, the 47-year-old who wreaked havoc upon a horde of 185-pound mixed martial artists 10 years ago is far from done with competition. What degree of challenge Paul will offer remains to be seen, although MMA fans who put their hopes and dreams into the likes of former champions Ben Askren and Tyron Woodley knocking the YouTuber down a peg have been left with no choice but to take the 25-year-old seriously by now.

After all, the monumentally accomplished Silva certainly takes him more seriously than “lazy people” outside the ring.

“The people talk a lot [about] Jake and [his] brother, too,” Silva said. “But the lazy people talk because the people don’t have the same energy and the same courage to do it.”

Silva, who at the press conference recreated a photo with brothers Jake and Logan that the trio took when they were kids and the Brazilian was at the height of his powers, has competed in a pair of pro boxing matchups since his UFC farewell in 2020. Although he won just once in his last nine UFC bouts dating back to 2013, he picked up a pair of high-profile victories last year over former WBC middleweight champion Julio Cesar Chavez Jr. and ex-UFC champ Tito Ortiz. Those marked his first pro boxing work in 16 years.

Paul, who through video services like Vine and YouTube became a top influencer, over the past two years rapidly became infamous in combat sports with knockouts of former Knicks guard Nate Robinson, as well as Askren and Woodley (plus a decision victory over Woodley in their first meeting). Despite just five pro fights and very little amateur boxing experience, he has been criticized for competing exclusively against non-boxers.

While Silva’s experience as a boxer is limited, the victory over Chavez combined his decades of boxing training and overall legendary striking prowess make him by far the most credible opponent Paul has been scheduled to face.

A planned Aug. 6 bout for Madison Square Garden against Hasim Rahman Jr. fell apart, citing issues with Rahman making the contracted weight. That opened the door for Paul to seek out a fight with the MMA legend, to whom the frequently trash-talking Paul would show only respect at Monday’s event.

The bulk of Silva’s combat sports career occurred before New York became the final state to sanction professional MMA in 2016. And while he picked up his final UFC victory at Barclays Center five years ago, he has yet to compete at the Garden.

Not that Silva is against the prospect of competing at The World’s Most Famous Arena. In fact, he’s got a prospective opponent in mind, someone against whom he’s professed his desire to box for well over a decade.

“I think [to have] my next fight there with Roy Jones Jr., maybe, is a good idea,” Silva wondered aloud. “I’m a big fan. I followed Roy Jones for my entire life.”

Stream It or Skip It?

Picks, odds for every game

Rundown of Sunday’s Round of 16 World Cup matches