Op-Ed: A moment of parent-driven chaos in a typical school day 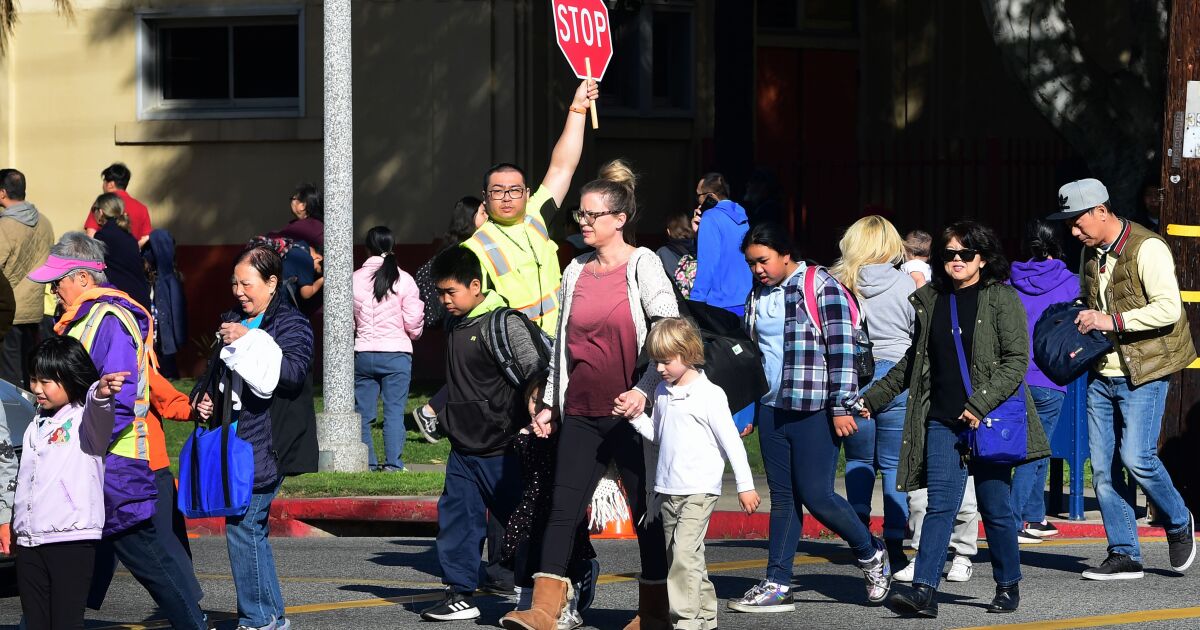 My kids have been back in school for a couple weeks and I’m struggling. No, the problem isn’t as dangerous as the ongoing threat to democracy or as life-threatening as climate change or the sweltering California heat, but it’s a bummer. I’m talking about the ruthless drop-off and pickup lines at my kids’ school.

When my daughter Penny was in the second grade, she wrote a short story titled “A Girl Named Emily.” In it, a mom named Emily is late to pick up her twin daughters from school because she is “stuck at the stop sign.” When her daughters are upset she apologizes by taking them out to lunch and everything is hunky-dory in the end.

The similarities to our lives were uncanny. I share a name with the mom in the story, have twin daughters — and I am often slightly late to pick them up from school. But when I asked Penny if the story was about me, she said no.

Her story has one other parallel to our lives. The cause for my tardiness is the stop sign that sits at the corner of my kids’ campus.

It is actually a four-way stop, and every morning and afternoon vehicles are backed up down the streets at the intersection. As cars inch closer to the school a crossing guard in a yellow vest helps children across the road. But once they’ve all crossed we drivers exchange frantic glances — who’s turn is it to go? One scoots forward just as another hits the gas, the driver of the Subaru on my left throwing their arms up in exasperation. Then the crossing guard, holding a fifth stop sign, paces into the street again, her arm out like a referee. Children cross. We wait again.

There’s a certain lawlessness in the line. I can see the defeat in the faces of the teachers who try to guide the cars along. They know they’re out of their depth. Drivers weave in and out, cutting one another off to make it curbside to collect their kids. For most of us the only way to navigate the chaos is by participating in it. It’s a total dumpster fire.

It’s every parent for themselves out here, but there are some unwritten laws. Violators are scowled at and subtweeted.

For example, there’s absolutely no place for lingering in the drop-off line. Moving steadily is the neighborly thing to do — not combing Jackson’s hair or helping Addison get all her books into her bag. Do that before you pull out of your garage.

If you’re one of the gems who has the time to park down the street and walk to the gate to grab your kiddos after dismissal, thank you — but remember that darting into moving traffic is a recipe for disaster.

Then there is the most egregious of all pickup line offenses. You’ve finally made your way past the stop signs, finagled your way to the curb, the kids have their seatbelts on and you’re headed out, feeling triumphant, when everything comes to an abrupt stop. You look around and then you see it — an abandoned Toyota sitting idle right there in your lane.

Just as you start to worry that maybe someone has passed out or died inside, because those should be the only reasons a car would block traffic during pickup, you see the culprit. A mother standing near the gate, holding her child’s hand and joking with another mom as the cars in front of you merge into the other lane to get around her deserted Toyota.

Do not ever be this parent. Do not make us curse in front of our kids.

Instead, be the comrade who moves things along. Some days are worse than others, but if we work together, if we prepare accordingly, it doesn’t have to be the Wild West. Maybe we can create the drop-off and pickup lines we want to see in the world.

Emily St. Martin is a Los Angeles based writer. @ByEmilyStMartin