Op-Ed: Martial arts training? What I really needed was a class in Self-Defense Communication 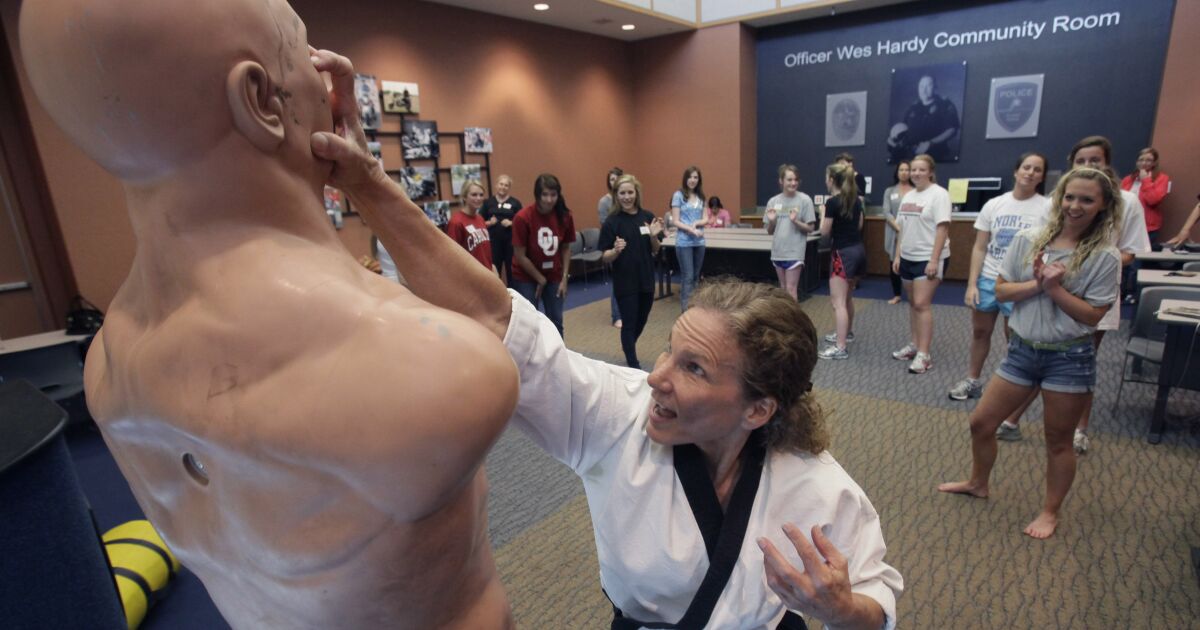 My first priority after the 2016 election was to find the next available hand-to-hand combat preparedness class because I would not be caught dead walking around the Upside Down of Pantsuit Nation without training for it.

Before, I could think I was safe from sexual assault. I didn’t know any politicians or newscasters or executives or gymnastic coaches or photographers or record producers or athletes or Academy Award winners. I wasn’t on a college campus anymore and lived in the United States, in a sanctuary city. I was indoorsy and hadn’t participated in spring break. I was white. Such privilege provided both security and a false sense of it, which pushed self-defense to the back of my mind, until that November.

Weeks after the election, I was in a basement classroom at a Manhattan gun range. A former police officer who now works as a stuntman went over how to use our body parts as weapons, how to grab a man’s package and twist, and how to take a video of a potential assailant, because after an attack your brain may protect itself by wiping the memory.

Amid practice shots fired outside the room, I took notes. But one point wasn’t being covered, one point he didn’t have to consider: How do you say no to a man on a date without being rude? And without making him mad?

The ex‑officer searched his notes.

“Men react like dogs,” he said finally. “A genial ‘no’ sounds a lot like ‘yes.’ A ‘nice no’ has multiple translations, like ‘convince me’ and ‘try harder’ and ‘you don’t mean what you say.’ You must firmly, sharply, vociferously pronounce ‘NO.’”

Ah, before martial-arts training, I needed to take its prerequisite, a self-defense communication class to address the legacy of silence that society had shoved down my throat since birth.

In 2015 Joey Soloway, the Emmy Award-winning writer and director, declared “a state of emergency” for a woman’s voice, in creative fields and everywhere else. For me, it was an emergency that I said “yes” when I thought “no,” that I believed it was basic etiquette to go along with a romantic overture, that I was taught a man’s satisfaction eclipses my comfort and also taught to say yes in every octave — never “no.”

It is an emergency that active consent remains fraught. It’s an emergency that language itself makes sex crimes difficult to prosecute (“he said; she said/whined/lied”). As Rebecca Solnit points out in her book “Men Explain Things to Me,” published pre-Depp vs. Heard, “it’s particularly when women speak up about sexual crimes that their right and capacity to speak come under attack.”

Ever since I started dating, “no” was beyond my ability, just as it was beyond many listeners’ frequencies. Like, I would say no, just not in those words (“ow” didn’t count). Or “no” seemed out of the question because “no” is insulting, hostile, harsh, bitchy, stubborn, fussy, unattractive, unfun, unreasonable, awkward, insane. And you can’t say no when someone has already initiated something; “no” was the anti-safe word, the one word that could instantly make someone angry and aggressive. Or I would have said “no” perfectly, had I been able to say anything, had my mouth caught up to the moment. Or had the modest clothes I wore actually communicated.

Because “those who can’t do, teach,” I drafted a starter curriculum of what we all should have learned in health class and from magazines and all media. In Self-Defense Communication, first we’d get crystal clear on what constitutes violation. Because if we can’t name violation, then how can we refuse it?

Next we’d study the fear system and normalize our extremely bizarre reactions when we’re afraid.

Then we’d chant “NO” over and over, with more and more exclamation points, to get used to it, to get our minds and bodies on the same page. As TV’s highest-paid showrunner Shonda Rhimes told Oprah, “‘No’ is a complete sentence.” Which we’d acknowledge is easier said than done. Then we’d expand our range: Please don’t speak to me like that. I’m not comfortable with that. That doesn’t work for me. I don’t want to. Nope. No way. Absolutely not. Under no circumstances. Never.

We’d rehearse slowing down and setting limits and exuding confidence; we’d risk being perceived as “not nice” for having boundaries. We’d role play asserting ourselves and not apologizing for it by taking turns accusing each other of being “impolite,” “humorless,” “unlikable,” “unlovable” and “oversensitive,” and then deflecting and dropping the carefulness that looks like agreement. We’d go against lifetimes of socialization and work on drawing attention, on being loud, on making a scene. And for those of us who allow ourselves to be interrup—

We’d work on that.

We’d practice acts as puny as sending many texts in a row, if only to exercise doing what we want and to stop basing our actions on the anticipation of how they’ll be received.

Yet, when victims do scream no — in the right words, in the correct tone — when survivors are incapacitated or are too stunned to run or too in love to mind, the effectiveness of Self-Defense Communication may be an open debate. But its necessity is not. Not when women get hurt on smaller scales, persistently, in broad daylight, sober. Not when women like me have been assaulted more times than we’ve been in love. There’s already Impact, a pay-to-protect-yourself program that includes full-force physical techniques and “communication strategies” to hone “verbal skills and the use of voice.”

Inherent in “self-defense” is that the onus falls on us to modify our behavior. Whatever happens to us is on us; it’s our mistake, our millstone. So Self-Defense Communication is one solution. Or, people could just really listen to women so that we don’t have to fight to be heard.

Elissa Bassist teaches writing and edits the “Funny Women” column on The Rumpus. Her memoir, “Hysterical,” will be published Tuesday.