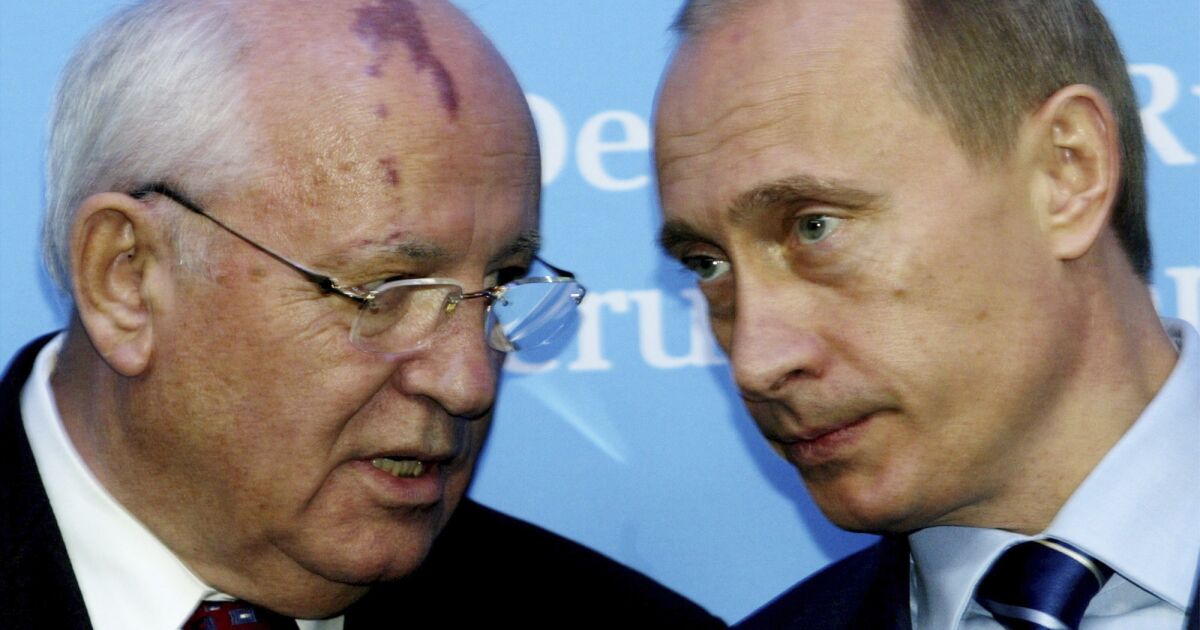 Last weekend, Moscow residents bid goodbye to Mikhail Gorbachev, the last ruler of the USSR and the man whose reforms shaped my worldview, along with that of millions of Soviet people.

Unsurprisingly, Vladimir Putin did not attend the funeral. Gorbachev, whom Putin blames for the dissolution of the USSR, personified a strikingly different model of power than the one employed by Russia’s current president. Their approaches represent two different paths to Russia’s soul — one dominant, one that remains a fragile promise.

Russian political power has long rested on a series of key assumptions. The ruler, known alternatively as the tsar, the “father of nation/s,” General Secretary of the Communist Party or president of Russia, is equated with the realm (hence assertions like “No Putin — No Russia”). His position at the pinnacle of power is an act of providence, which makes election superfluous and debate dangerous. He must have a “firm hand” to hold the realm together, protect it from enemies and root out dissent. His interests, often presented as the interests of the state, supersede interests of the individual.

The outcomes of this predatory model were consistent: Russia was largely a technologically backward country before the Bolshevik revolution, and the USSR, despite the Stalin-era industrialization, was on the verge of economic collapse by the time I was growing up in the 1980s. But the power model persisted because it helped the ruler and his clique to rob and control the population, which is most compliant when scared, stupefied or coopted. The ruler at once denies his subjects agency and fears them: The violence unleashed by Russian revolts is proverbial.

Mikhail Gorbachev turned the Russian power model on its head. To revitalize the dying Soviet experiment, he tried to give us, Soviet people, agency, dignity and responsibility for the future. Though initiated from the top, his perestroika reforms assigned us the role of partners and facilitated political freedoms. He encouraged his subjects to engage in a dialogue with power, prodding the nation’s atrophied brain. By opening the Party archives as part of glasnost, or the policy of information transparency, and by allowing the press to publish critical pieces about our past and present, Gorbachev treated Soviet people as capable of critical thinking.

He also promoted real elections. In March 1989 I remember being glued to the TV for three days during the live broadcast of the first Congress of People’s Deputies, one of Gorbachev’s political innovations. Among the elected deputies was Boris Yeltsin, who argued with Gorbachev on live TV — and didn’t get arrested. Former exiled dissident and scientist Andrey Sakharov received a standing ovation including from Gorbachev himself. Listening to their speeches in the Palace of Congresses, under Lenin’s effigy, was at once surreal and hopeful. Those political initiatives nurtured a group of liberally minded politicians who would form the core of President Yeltsin’s team of young reformers.

Gorbachev did not equate dissent with treason and, with some notable exceptions, did not suppress it — allowing miners’ protests that shook the already weakened Soviet economy and demonstrations against the supremacy of the Communist Party. He did not unleash the massive repressive apparatus at his disposal on his own people. He let out political prisoners and refuseniks — including my husband’s family, who after nine years of being denied the right to leave the USSR were finally allowed to emigrate.

Gorbachev was the first Kremlin ruler to reverse the unnatural “deal” in which the state’s interests always trump those of the people. It was in the interest of the USSR not to grant sovereignty to Soviet republics. Gorbachev did, though not at once and not without blood. It was in the Soviet state’s interest to be antagonistic toward the capitalist West, to advance the “besieged fortress” mentality — but he shook hands with Ronald Reagan and stopped the arms race. It was in the interests of the state to keep the Communist Party at the helm — but Gorbachev dissolved it. Then he resigned, receding into history and lived an ordinary life: traveling, writing books, giving talks.

What then happened in the land Gorbachev had ruled? His reforms jump-started individual initiative, enabling more cooperatives and private enterprises in the 1980s stretching into the 2000s. Geopolitically, Gorbachev set the stage for more than a dozen sovereign states with vibrant national cultures.

Russia proper, in turn, was freed from the demand to subscribe to ideological dogmas and from “special authorities” that persecuted people for their beliefs. I remember the absence of fear, which helped us cope with the subsequent economic hardships, as I remember a new breed of fearless young politicians and journalists of that era. There was genuine sentiment, so rare in a community atomized by violence, that we could and would do better.

Yet Gorbachev’s six years in power proved too short to reverse the gravitational forces of Russian history that bend toward autocracy. Today Russia is yet again an oppressor, at home and abroad.

Like a mirror, the Russian people tend to reflect the sensibility of their rulers. The only way to reverse this is, in the words of Anton Chekhov, to “squeeze the slave out of myself drop by drop” — or in the more recent iteration from Alexei Navalny, “to not be afraid.”

The trouble is that in Russia, chances like Gorbachev might come only once a lifetime. But what I learned in those six years is that Russia doesn’t have to be ruled by fear.

Anastasia Edel, a San Francisco-based writer who grew up in southern Russia, is the author of “Russia: Putin’s Playground: Empire, Revolution, and the New Tsar.” @aedelwriter