Op-Ed: Will California’s second zero-emissions car mandate avoid the failures of the first? 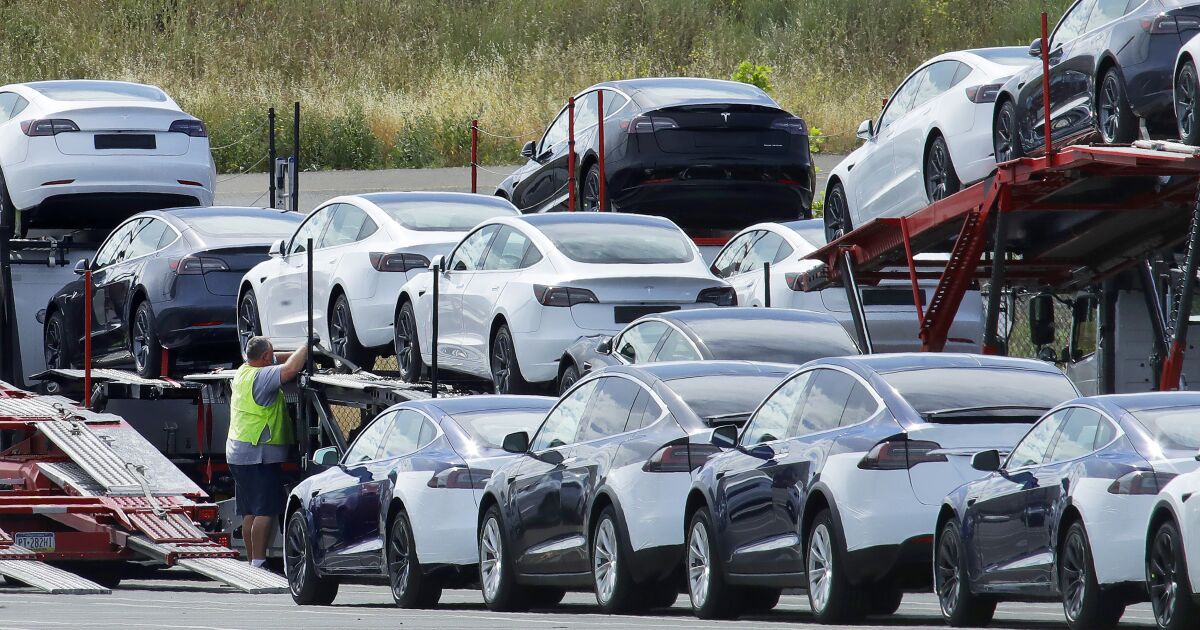 During a memorable appearance on late-night TV, Tom Hanks spent a fair amount of time recommending his electric car to the audience. When the bemused host asked the actor what he was trying to accomplish, Hanks replied, “I’m saving America, Dave. That’s what I’m doing.” The audience burst into applause.

The Dave in question was former “Late Show” host David Letterman, and this chat happened back in 2004. Hanks’ beloved electric SUV ended up not saving the world because California killed the plan that created it — our first zero-emission car mandate. Had that 1990 plan survived, we could have broken our addiction to gasoline and eased catastrophic climate change much sooner than the new clean-car mandate the state just re-adopted last week.

So, yay, I’ll join in celebrating the California Air Resources Board’s historic vote to once again phase out sales of new fossil-fuel-powered cars, SUVs and pickups in the state, this time by 2035. But my cheers for this absolutely vital step are leavened with major deja vu — and my real concern that history could easily repeat itself, given that this same board killed the first mandate for all the wrong reasons.

That history of failure puts us on notice: This vote for a zero-emissions future is just the opening salvo in a long war we lost last time. Be ready for the same pro-fossil fuel disinformation campaign and lack of official fortitude that ended the first mandate. Such opposition will succeed again — unless California voters, leaders and those who want a future free of fossil fuels keep the electric car pedal to the metal this time.

So how did the 1990 version fail? A model of moderation, the original plan called for just 2% of cars sold annually in California to have zero emissions by 1998, 5% by 2001, and 10% by 2003. By then, there could have been as many as 150,000 clean, affordable electric cars on the road, and the Air Resources Board figured market forces would do the rest. (Without the mandate, it took plug-in car sales in California until 2021 to top that 10% annual threshold.)

Carmakers fought the mandate from the start, grudgingly bringing to market an array of EVs. General Motors had its sleek EV1. Ford built the bubble-shaped Think. Toyota converted its small SUV into the RAV4-EV, the most popular of the newbie green cars. Its sturdy and reliable advanced nickel metal hydride batteries delivered about a 100-mile range. As the first round of EVs finally trickled into showrooms in 1996, thousands of Californians got on waiting lists — for leases only. Carmakers wouldn’t sell the EVs outright. Once behind the wheel, consumers appeared to be smitten.

This terrified a car industry then in the midst of a profitable gas-guzzling SUV boom. After building a mere 4,400 EVs, carmakers pronounced them failures, claiming that American drivers would never accept them, that the batteries were too weak, and that California was hurting the car industry and consumer choice. They begged, bullied, threatened to sue, then filed suit (joined by the Bush administration), and demanded concessions and delays of the EV sales goals. The Air Resources Board gave in, ignoring the pleas of environmentalists, startups ready to build cars and the consumers who drove them.

In April 2003, the board officially killed its EV mandate and gave carmakers what they wanted, including betting big on hydrogen-powered car research instead, which has most definitely not saved the world. Meanwhile, Ovonics, the company that held the patents on the promising nickel metal hydride batteries, was bought by General Motors and eventually was snapped up by Chevron. And those revolutionary batteries were disappeared like political opponents in an authoritarian regime.

Now here we are, 32 years after the first mandate, trying again. We missed the chance to avoid our current plague of drought, wildfires and record high temperatures, but it’s not too late to prevent even more damage, along with the other ills that arise from fossil fuels. We need this. But we are at a classic “fool me twice, shame on us” crossroads.

So steel yourselves: As deadlines for selling more zero-emission cars and fewer gas guzzlers approach, the same old delay tactics, weaseling, lawsuits and lobbying will rise up. If not from carmakers, then from fossil fuel interests, climate deniers and their political allies — all to continue peddling products that are killing our state, our planet and our people.

Will California stand firm this time? It helps that EVs are proven and now considered cool, even by the auto industry. But the mass embrace of clean cars will never be realized if carmakers continue to sell mostly luxury EVs that a majority of Californians can’t afford. With the average EV costing $66,000 a pop, this pricing tactic will kill the mandate better than any lawsuit or disinformation campaign — if the air resources board lets them get away with it, and if we fail to hold the board accountable.

Let the fate of the first batch of mandated electric cars be our warning and our incentive: Rounded up as their leases expired, they were carted to the desert and stacked like cordwood. Despite pleas from leaseholders to buy them, those perfectly good cars were crushed and shredded into cubes of scrap — except for the EVs from Toyota, which relented at the last minute and let customers buy them.

It’s hard to imagine gas-guzzlers facing a similar fate, but if we stand firm this time, that day will come. This is California’s “for all mankind moment,” a second chance to create an alternate future that we gave up on last time. Our kids and their kids and generations to come will thank us for it — and for making Tom Hanks’ words finally come true.

Edward Humes is a Pulitzer Prize-winning journalist and the author of 16 nonfiction books, including the forthcoming “The Forever Witness.”

Congressional Dems need to move on stock-trade and election bills

‘Vote for anyone, but vital to use franchise’: For a 100-year-old in Delhi, polls are key | Latest News Delhi

‘Vote for anyone, but vital to use franchise’: For a 100-year-old in Delhi, polls are key | Latest News Delhi