Op-Ed: With ‘doomsday’ flooding, who should pay for Pakistan’s climate disaster? 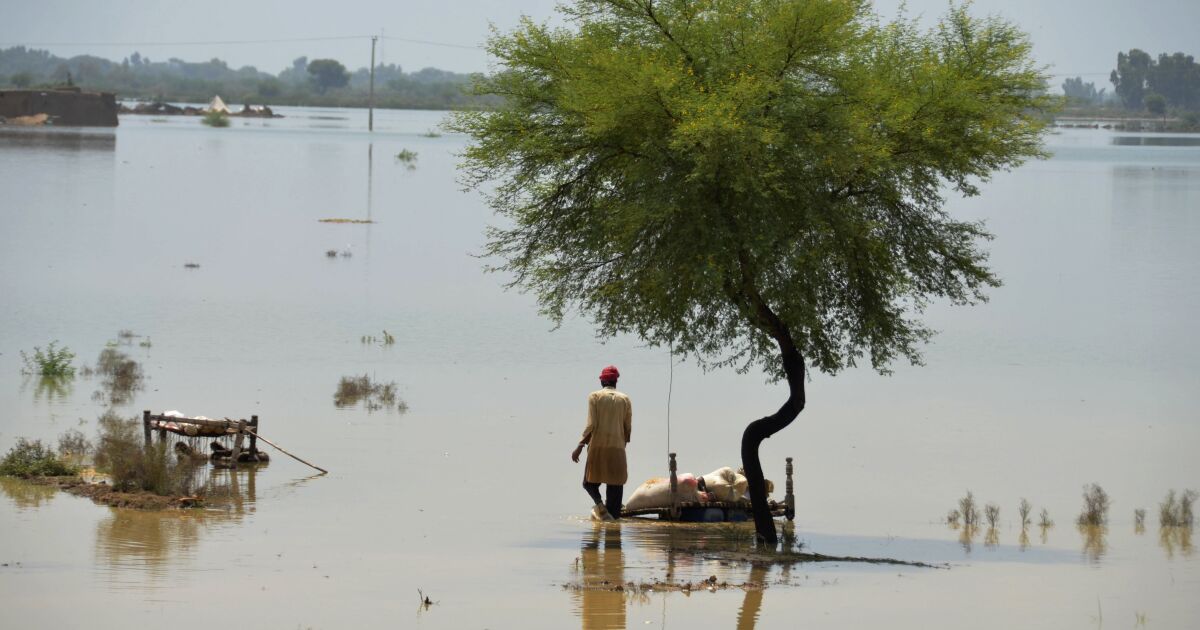 Unimaginable flooding has devastated Pakistan in recent weeks. In August, Sindh province, home to 50 million people and one of the hardest-hit regions, received eight times its average rainfall. More than 14 million people have been affected by torrential rains and flash floods, with close to 400,000 displaced.

In the past two decades, Pakistan has contended with varied natural disasters: In 2005, an earthquake killed nearly 90,000 and left more than 4 million homeless; in 2010, huge flooding displaced millions; and as recently as May, Jacobabad in Sindh was the hottest city on Earth.

But today, even those who have experience dealing with such disasters are reeling. Meena Gabeena, a political activist, has worked during droughts, flooding, earthquakes and in camps with people who were displaced due to military operations. “But this is qiyamat,” or doomsday, she told me. “There is no other word.”

We scramble to describe the scale of the devastation, to find a measure you can comprehend. One-third of the country is submerged. In an interview with NPR, Sherry Rehman, Pakistan’s climate change minister, tried to get the average American to imagine this. “Colorado is a big state, right?” she said. “A bigger area than Colorado is under water.” More than 33 million Pakistanis are affected. That’s one in seven people. More than 1,000 are dead.

While donations pour in from across the country and through fundraisers by Pakistanis abroad, we are also using social media to call for help on an unprecedented scale. Social media is now making it possible to pinpoint where doctors are needed in camps, as well as crowdsourcing and the mapping data of affected areas in calls for rescue. Small organizations have been able to mobilize quickly to provide relief. For instance, Mahwari Justice, run by two young women who connected on Facebook, is providing thousands of hygiene kits with underwear and menstrual pads, as an estimated 8.2 million women of reproductive age have been affected by the floods.

Against this backdrop of devastation and rescue efforts, there’s debate within Pakistan and internationally about who is responsible for this disaster. The government says Pakistan is a victim of the “irresponsible development” of Western nations. The country is home to more than 7,000 glaciers, and rising temperatures linked with climate change are causing them to melt at an accelerated rate, resulting in landslides and flash flooding. Since 1959, Pakistan has been responsible for only 0.4% of global greenhouse gas emissions — compared with 21.5% by the United States.

Pakistanis now face an estimated $10 billion in damage, according to Planning Minister Ahsan Iqbal, with roads, bridges, crops, livestock, homes and infrastructure destroyed. “There is no reason why a less-than-1% emitter like Pakistan should be asked to [pay for this damage] on their own,” Rehman says.

At last year’s COP26 climate change conference in Glasgow, Scotland, however, wealthy nations only agreed to start a dialogue about how they might offer such “reparations.” It is not enough. The U.S. has pledged $30 million in aid to Pakistan for the floods, but this is practically nothing if countries like Pakistan have to deal with the deadly consequences of unchecked climate change year after year.

But local politicians in Sindh shouldn’t be let off the hook for their inadequate and callous response either. Manzoor Wassan, a member of Rehman’s party, the Pakistan People’s Party, was interviewed in a boat as people clung to its edge. “In 50 years, I have not seen anything like this,” he says in the video. “If you’ve ever been to Italy, it is like Venice, the way there are villages and houses in water. It’s the same thing I saw when I visited Venice.” He complains, too, that 1,500 acres of his own land have been flooded.

Meanwhile, speaker of the Sindh Assembly Agha Siraj Durrani scolded villagers and reminded them of verses in the Quran that promised such catastrophes would be visited upon sinners. Another politician was filmed sipping a soft drink and washing his feet with donated bottled water while surrounded by villagers. These leaders cannot be our defenders against the climate terrors yet to come.

The next conference on climate change, COP27, will take place in November. Reparations will likely be discussed once more, but for those who have now lost everything in the floods, the conversation is taking place too late. In interviews, they ask when they can return home, even if “home” is now a patch of flooded land. What we see in Pakistan is the future that climate activists warned us against. Who is responsible? Who should pay? The time for those questions has passed. We now ask: Will we survive?

Sanam Maher is a journalist based in Karachi, Pakistan, and author of “A Woman Like Her: The Story Behind the Honor Killing of a Social Media Star.” @sanammkhi