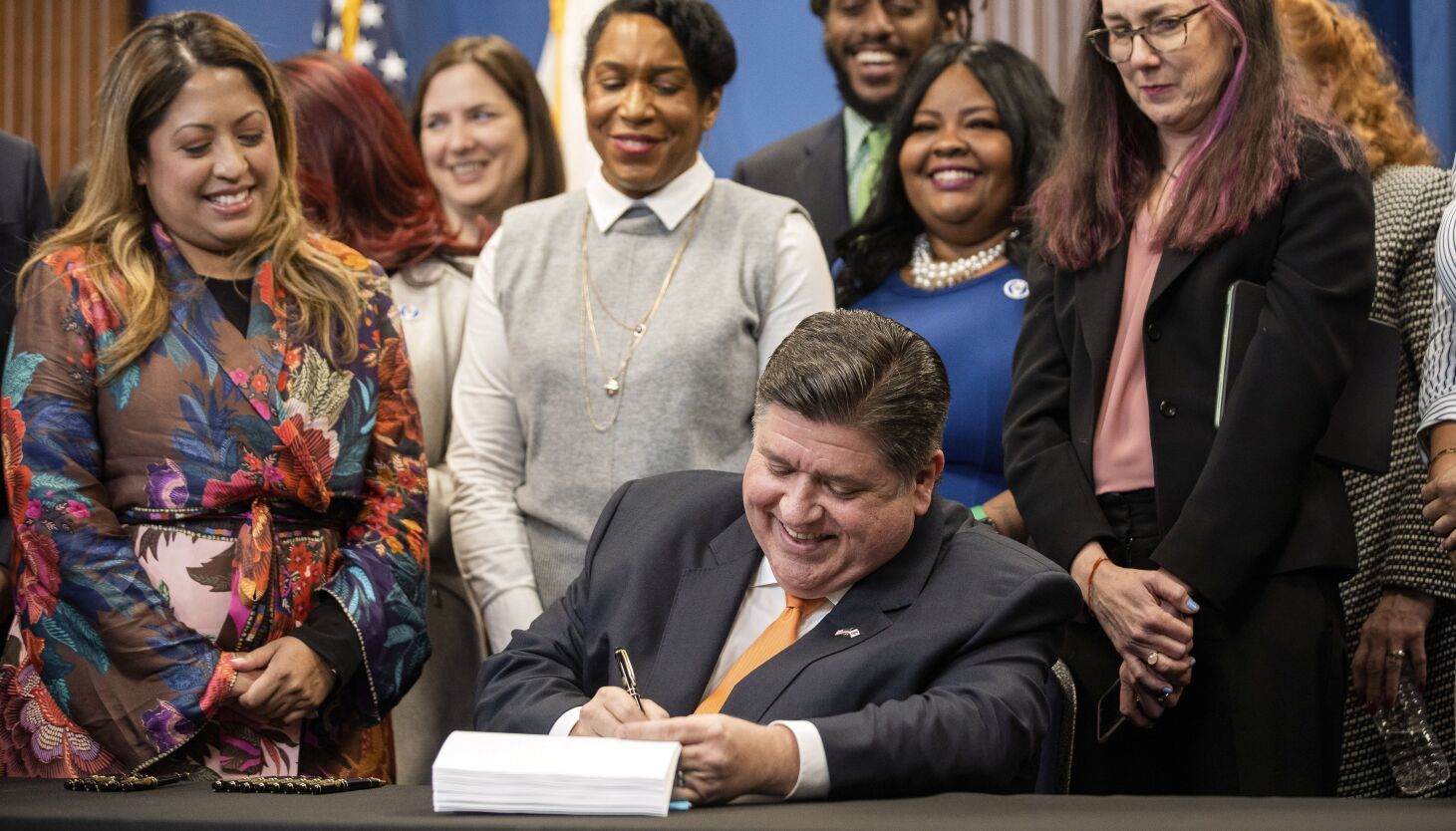 Physician assistants and nurse practitioners are now fully authorized to perform some of the most common in-clinic abortions across Illinois, and out-of-state patients seeking such care won’t have to worry about their information being shared with authorities in states where the treatment has been outlawed.

Those are just two provisions of a sweeping bill signed into law Friday by Gov. J.B. Pritzker aiming to bolster Illinois’ status as “an island of reproductive justice” following the U.S. Supreme Court’s overturning of Roe v. Wade.

The legislation approved in Springfield earlier this week is designed to increase abortion access as an influx of patients flock to Illinois for the procedure, which has been severely restricted or banned completely in every other Midwestern state except Michigan, Minnesota and Kansas.

Illinois providers saw about 10,000 annual out-of-state abortion seekers on average before the federal protection afforded by Roe was overturned in June, according to Pritzker’s office. Advocates expect that number to triple, at least.

“Our clinics have been doing their best to serve the people seeking to exercise their rights, but they’ve been overwhelmed,” Pritzker said at a bill-signing ceremony in the Loop. “We have an obligation to support and protect reproductive freedom for our residents, and those who seek safe haven, and we must protect our doctors and nurses, too.”

The new law asserts that physician assistants and nurse practitioners can perform vacuum aspiration, or suction abortions, the most common type of procedure for pregnancies up to 14 weeks, which don’t require general anesthesia.

It also includes a “shield law” like those on the books in other Democratic majority states preventing out-of-state authorities from issuing subpoenas, summons or extraditions to patients or providers here for being involved with abortions or gender-affirming care. That includes a range of treatments for people who don’t identify with the gender they were assigned at birth — another practice that conservatives are restricting in many states.

“There are states in this country that are creating refugees coming to Illinois to seek refuge to make bodily decisions of their own,” said state Sen. Celina Villanueva, D-Chicago.

Among numerous provisions, the law also speeds up the process for issuing temporary permits to abortion providers as the system is stretched thinner due to the influx of patients. It requires the state Department of Public Health to partner with organizations to provide grants for abortion training. And it prevents insurers from charging higher out-of-pocket costs for people seeking abortions who were turned away from in-network providers who raise “moral objections.”

The legislation was roundly supported by Democratic supermajorities — and panned by Republican opponents.

In a statement released after the bill passed the House, downstate GOP state Rep. Blaine Wilhour said House Dems “might as well … become honorary Planned Parenthood staffers because they seem to not be satisfied until abortion clinics are as numerous in our communities as Starbucks.

“We are far beyond simply allowing abortion to be legal,” the Beecher City Republican said. “The state is not yet springing for Uber rides to abortion clinics, but we are close.”

It was a Republican governor — one who’s no longer popular with the state party — who signed the first in a series of measures that have maintained Illinois’ status as a safe haven for abortion rights.

Legislation signed by former Gov. Bruce Rauner in 2017 allowed for public funding of abortions, and, foreseeing this year’s reversal, ensured the procedure would remain legal if Roe was overturned.

Pritzker signed a law in 2019 codifying the right to reproductive health care, and in 2021, his signature repealed the last state law on the books restricting abortion rights: the one that required minors to notify a parent or guardian before treatment.