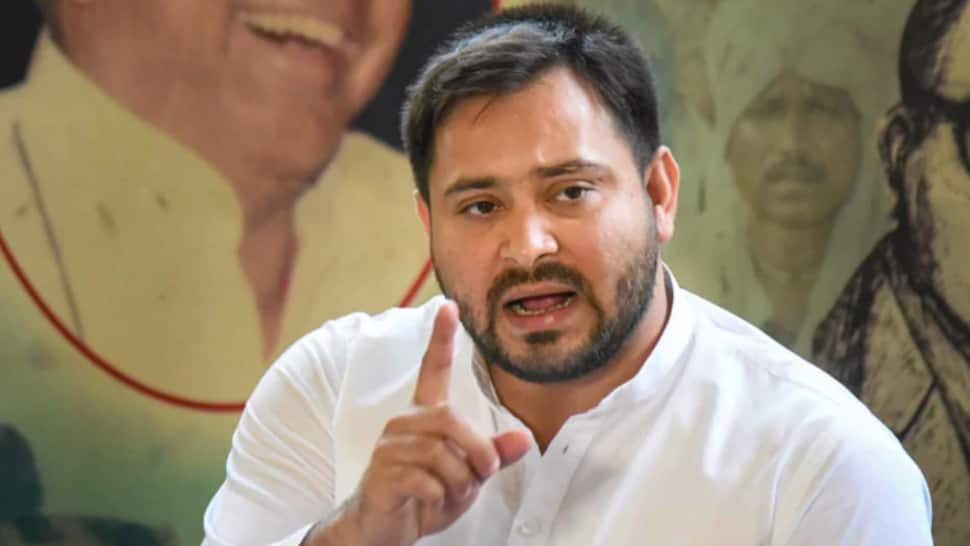 Patna: Bihar Deputy Chief Minister Tejashwi Yadav on Sunday blamed BJP’s “conspiracy” for the controversy over the alleged insult to the ‘Ramcharitmanas’ by his cabinet colleague, who belongs to the RJD. Yadav was talking to reporters late in the evening upon return from the national capital, where he had gone to console bereaved family members of former Union minister and party colleague Sharad Yadav.

“The ‘Mahagathbandhan’ has been formed by its two top leaders (‘sheersh neta’) Lalu Prasad and Nitish Kumar. It is they who enjoy the trust of the people and not the ‘bayanveers’ (motormouths),” said Yadav, refusing to be drawn into the spat between leaders of the chief minister’s JD(U) and the RJD founded and headed by his father.

The slugfest has been triggered over a statement of Education Minister Chandra Shekhar, who had alleged that certain verses of the ‘Ramcharitmanas’ promoted social discrimination, and ended up comparing the popular version of Ramayana to ‘Bunch of Thoughts’ penned by RSS ideologue M S Golwalkar.

This evoked sharp criticism from many in the JD(U) as well as some in the RJD itself.

“The Constitution is, for us, like a holy book which gives everyone the right to express one’s opinion. Yet, it is the same Constitution that makes it incumbent upon all to accord respect to all religions,” said the young leader, in a deft bid to extricate himself from the political wrangle.

“The ‘Mahagathbandhan’ is unbreakable (‘tootne wala nahin hai’). We are working towards fulfilling our promises like the caste survey and 10 lakh jobs,” the deputy CM said.

He also said people should be mindful of the ‘conspiracies’ of the BJP, as it is ‘cunningly’ trying to direct the political discourse towards a Hindu versus Muslim binary.

“Let me make a forecast. In near future, you may see central agencies like the ED after me with a fresh case. Then the focus will be on maligning me and my family,” said Yadav, in the backdrop of a recent sanction by the Centre to prosecute his father in yet another case pertaining to the latter’s tenure as railway minister.

The BJP in Bihar must have received training when a couple of their top leaders visited the state in the recent past, he said, in an apparent reference to Union Home Minister Amit Shah and BJP national president J P Nadda.

“We must understand the BJP’s machinations. They had tried to discredit CM Nitish Kumar with rumours that he wanted to cool his heels as governor or the vice-president while trying to break his party. They are at work again since the ‘Mahagathbandhan’ is an eyesore and can hamper their prospects in the 2024 Lok Sabha polls,” the RJD leader claimed.