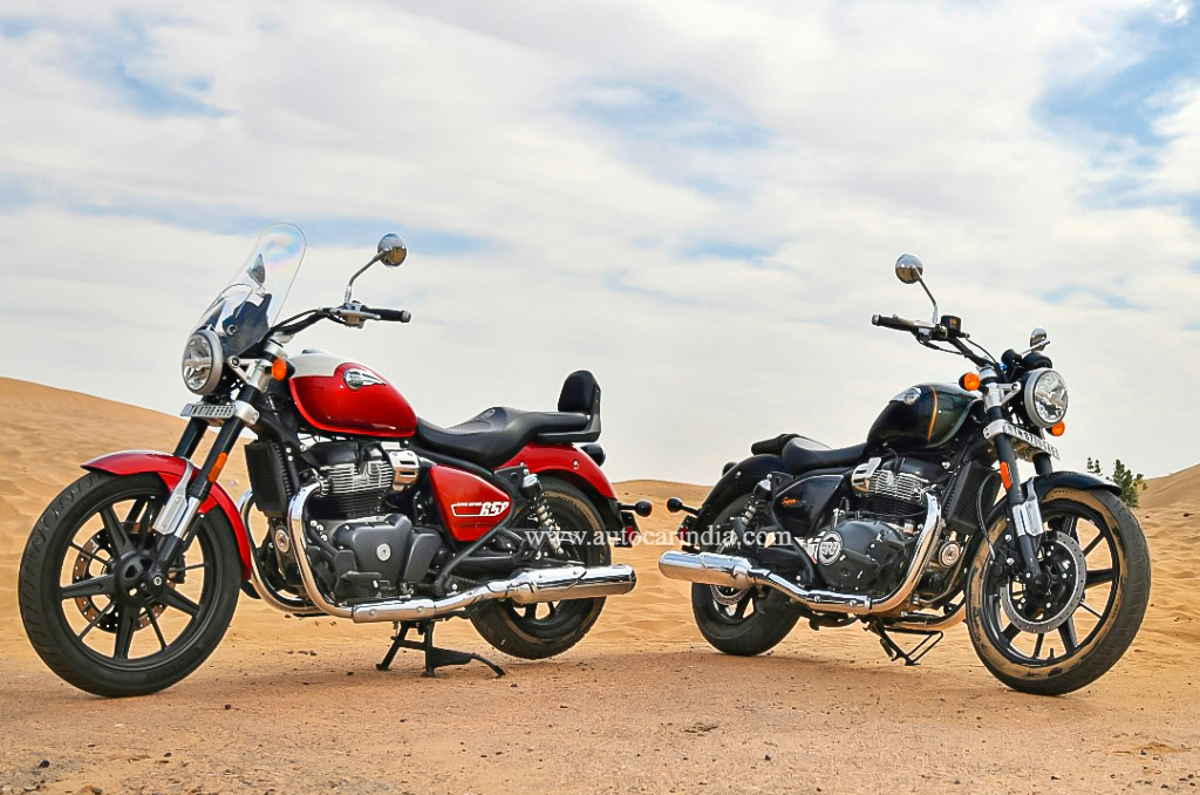 The Royal Enfield Super Meteor 650 has been launched in three colour variants, with the most affordable Astral costing Rs 3.49 lakh, the mid-tier Interstellar costing Rs 3.64 lakh and the range-topping Celestial costing Rs 3.79 lakh.

The entry-level Astral is available in three single tone colours: black, blue and green, which are priced at Rs 3.49 lakh. The mid-spec Interstellar gets two grey and green dual-tone paint options, and a higher asking price of Rs 3.64 lakh, but other than that, these two are mechanically identical to one another. The range-topping Celestial gets a few accessories as standard, such as the large front windscreen, touring seat and pillion backrest, which drive up the price to Rs 3.79 lakh.

All of these accessories are backward compatible with the Astral and Interstellar variants, and RE’s vast accessory catalogue will offer even more fine-tuning and customisation to prospective Super Meteor 650 buyers. Royal Enfield has said this pricing is not introductory. The Super Meteor 650 can be booked starting today and deliveries begin on February 1.

The Royal Enfield Super Meteor 650 was unveiled to the world at EICMA 2022, and we in India got to see it up close at Rider Mania late last year, where RE also allowed attendees to pre-book its flagship cruiser. The Super Meteor 650 uses an all-new frame compared to the existing 650 twins, and packs in a couple of RE firsts, in the form of a beefy 43mm Showa SFF–BP (Separate Function Fork – Big Piston) front fork as well as an LED headlight.

The engine itself has undergone a few minor revisions compared to the existing 650 twins – it gets a different airbox and exhaust system, and so the mapping has also been revised. Overall gearing is slightly shorter, thanks to final drive changes as well as a smaller 16-inch rear wheel. Peak output figures, at 47hp and 52Nm, stay the same, although the peak torque output arrives 500rpm later in the rev band. RE claims that 80 percent of the peak torque arrives at just 2,500rpm on the Super Meteor 650.

Braking duties are taken care of by a 320mm disc at the front and a 300mm unit at the rear, both paired to dual-channel ABS. At 740mm, the Super Meteor 650’s seat height inspires confidence, but the 241kg kerb weight and 135mm ground clearance figures do not. A 15.7-litre fuel tank is on offer here.

At this price, the Super Meteor 650 sits in a niche of its own in the market. Bikes like the Rs 3.49 lakh QJMotor SRV 300 and the Rs 3.89 lakh Keeway (Benda) V302C, which costs Rs 10,000 more than the Super Meteor 650, can’t possibly match the performance advantage of the larger Royal Enfield.

Bikes that offer similar output figures or displace the same cubic capacity are handsomely undercut by the flagship Royal Enfield cruiser. Its pricing makes it roughly Rs 60,000 more expensive than an Interceptor 650, although in comparison to the Benelli 502C and the Kawasaki Vulcan S, the Super Meteor is Rs 2.3 lakh and Rs 2.9 lakh more affordable, respectively.

All prices are ex-showroom, Delhi.